In Chicago, tours are available at:

The Frank Lloyd Wright Trust engages 350 interpreters who function as guides for the Trust’s sites. These trained volunteers have a special connection with architecture and passionately spread the word about Wright’s legacy.

An interpreter at Wright’s Oak Park Home and Studio, Mark Scott is a lifelong resident of Oak Park and River Forest. Growing up in a place where a Wright home was a common sight, Scott developed an early appreciation for architecture.

“Architecture can enhance and change a community,” Scott says. “Beautiful buildings make you feel different and give you a sense of pride in where you live, and you want to share this with your community.”

In 1889, Wright designed a home to accommodate electric lighting and indoor plumbing. It also had many modern design elements. Built-in seats, expansive window sets and open spaces that flow from room to room are touches that surprise most visitors. 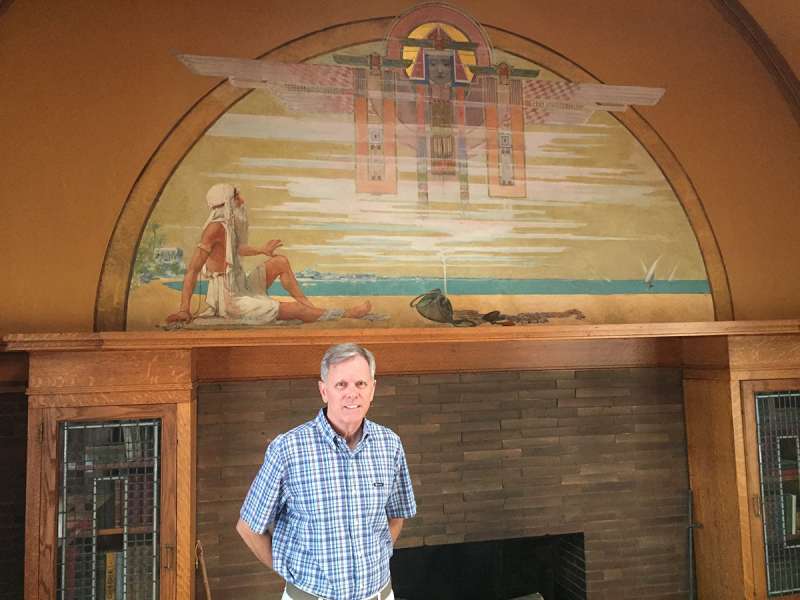 “They expect to come into this old-fashioned home,” Scott says. “But they see so many things that are in homes right now that connect to modern times.”

The house on Forest Avenue was Wright’s design laboratory, constantly being redecorated and renovated. In his home, Wright experimented with his ideas of “organic architecture” – architecture with simple lines that blends with the natural landscape. A building’s interior spaces are just as important as the exterior.

Beyond its design innovations, the Home and Studio housed an active family with six children.

“You can look at the Home and Studio as a shrine, a sacred place to architecture, but this was a house where a family lived,” Scott says. “Wright raised his kids here. He tried to create an environment for his family. Knowing that this was a home, that adds a whole other dimension to the building.”

In 1898, Wright added his architecture studio, which is where the Prairie style of architecture was conceived. About a third of Wright’s lifework came out of this studio, a place where his masterpieces of design evolved out of collaboration with a cadre of talented architects, draftsmen and artisans.

One of Wright’s most innovative and modern works designed in Wright’s Oak Park studio, Unity Temple, stands a short walk from the Home and Studio in the heart of downtown Oak Park.

A stunning concrete structure, Unity Temple is Wright’s only remaining public building of his Prairie period. The building underwent a comprehensive two-year restoration, completed in 2017. it’s a must-see for anyone who loves architecture and Frank Lloyd Wright.

Unity Temple tour guests marvel at its modern design, says Trust interpreter Sue Blaine. “It doesn’t look like something that is over 100 years old.”

An imposing monolith on the outside, the building has a welcoming quality inside.

“The exterior is really intimidating. It looks like it’s going to be really dark,” Blaine said. “It’s such a huge contrast inside. It’s airy; it’s light and bright.” 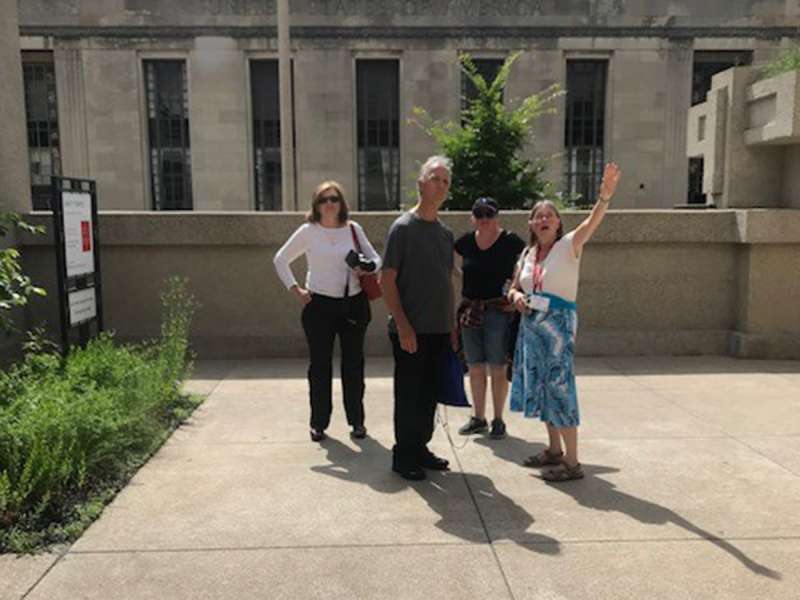 Blaine said her favorite part of the tour happens when she leads her group into the sanctuary.

“People walk into the sanctuary, and they almost don’t know where to look first. But it’s usually up,” she says, referring to the 25 leaded glass skylights. “Wright wanted to create the feeling of a bright, cloudless day.”

The story behind how Unity Temple came to be is as fascinating as the building itself. Wright had a deep connection with the Unitarians and their progressive notions. His father had been a Universalist preacher, and his uncle was a distinguished Unitarian preacher on Chicago’s South Side.

When the original church was destroyed in a lightning fire, its reconstruction was a community effort. Wright received the commission and instructions to design a modern building embodying the principles of “unity, truth, beauty, simplicity, freedom and reason.”

“He really understood how the religion worked,” Blaine said. “One of the things that really astounds me is it is such a neat building, and Wright anticipated how it should be used.”

She urges people to walk the three blocks from the Home and Studio and take a tour. “Unity Temple is considered one of the most significant buildings of the 20th century. It’s so close. Come and see! It’s such a contrast to the Home and Studio.” 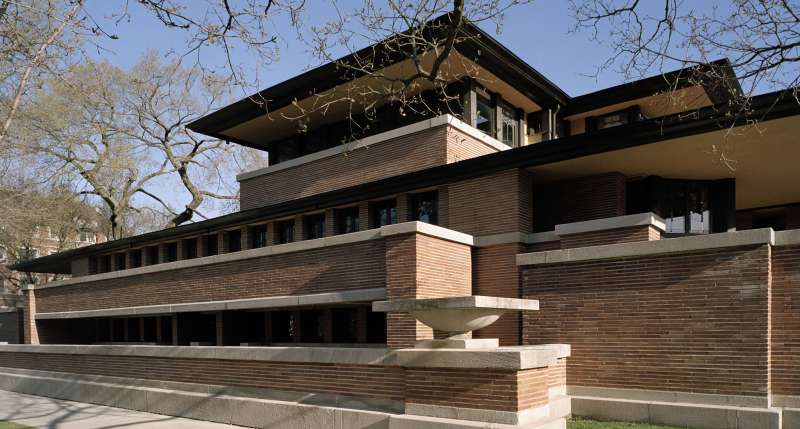 Joan Pantsios knew a lot about Frank Lloyd Wright before she joined the Trust’s interpreter ranks. As a teen, she often visited family friends who lived in a Wright home in River Forest. While a student at Barnard College, she talked her way into the Frederick C. Robie House, when it was an office building for the university.

She still talks about the building.

“You look at the other houses in the neighborhood. They’re very traditional. You look at Robie House and it’s something completely different,” Pantsios said. “Was this really built in 1910? One big room and that long expanse of doors along the south balcony—it’s so modern compared to any other 1910 house they have been in.”

Robie House is a masterpiece of modern architecture and interior design, and the consummate expression of Wright’s Prairie style. In 1991, the house was recognized by the American Institute of Architects as one of the 10 most significant structures of the 20th century.

The home is noteworthy for its open floor plan and spectacular leaded glass. It had technological conveniences that are still enviable today – including a three-car attached garage, an internal vacuum system and an intercom. But Wright also applied innovative design ideas for family life. 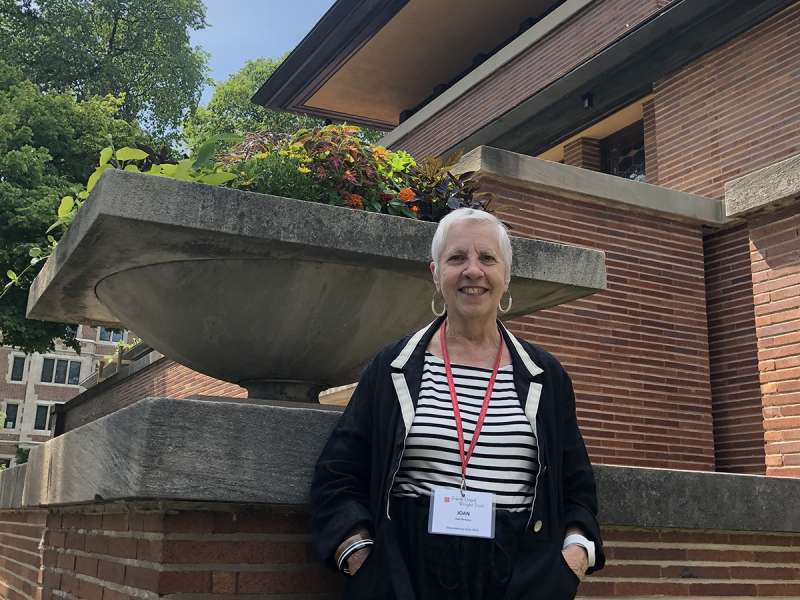 “For a rich family in a big house, the kids would be in the nursery upstairs,” Pantsios says. “In Robie House, the playroom is on the ground level for safety. Right on the other side is dad’s space. You have this proximity between parent and child. For a family of this wealth and status it is a little bit unusual.”

With the new Frank Lloyd Wright Trail, there's no better time to explore these amazing properties. When you head out to enjoy them, don’t forget to share your stories, your snaps, and your top tips with us on the Enjoy Illinois Facebook page. Hashtag #EnjoyIllinois and we’ll all be inspired by your adventures!