Illinois Governor’s Mansion: A History of the People’s House

Following recent restoration, the Illinois Governor's Mansion is more beautiful than its ever been in its 160+ years. Learn about the building's history, and how you can visit it in Springfield.

Home You are in… Illinois 200 » Illinois Governor’s Mansion: A History of the People’s House

Share 'Illinois Governor’s Mansion: A History of the People’s House'

Just a quick ten-minute walk from the State Capitol Building in Springfield, you’ll find one of Illinois’ most remarkable historic buildings, the magnificent Illinois Governor’s Mansion.

Built in 1855, the Mansion recently underwent much-needed privately-funded renovation, and is now ready to greet governors, their families and visitors for decades more to come.

So as we celebrate this new chapter in Illinois history, let’s take a stroll back through the storied history of the Illinois Governor’s Mansion.

The story begins, as so many Illinois histories do, with a familiar name: “Abraham Lincoln.” In 1840, then-State Representative Lincoln introduced a Bill to authorize the purchase of a house and lot in Springfield for the Governor’s use.

But before you get too excited, it wasn’t the current building. In fact, it didn’t end up being any building. The Bill didn’t pass.

Fast-forward eight years, and Lincoln’s plan would come to pass: the state bought a two-story brick house for the use of the Governor and his family.

Though it still wasn’t this building. This first governor’s residence was a small, unremarkable structure, fine for housing a small family, but not much more.

And its second occupant didn’t have a small family. Governor Joel A. Matteson was father to seven children, and as he took office in 1853, he came to a swift conclusion that the residence just wouldn’t do the job.

The state legislature approved a new house. One that wouldn’t just house a large family, but could be used for state events and other official engagements. A true People’s House.

The finest building in Springfield

Two years and $53,000 later, the new governor’s mansion was complete (and yes, this is the same one that stands today). And it was extraordinary—the finest building in town. 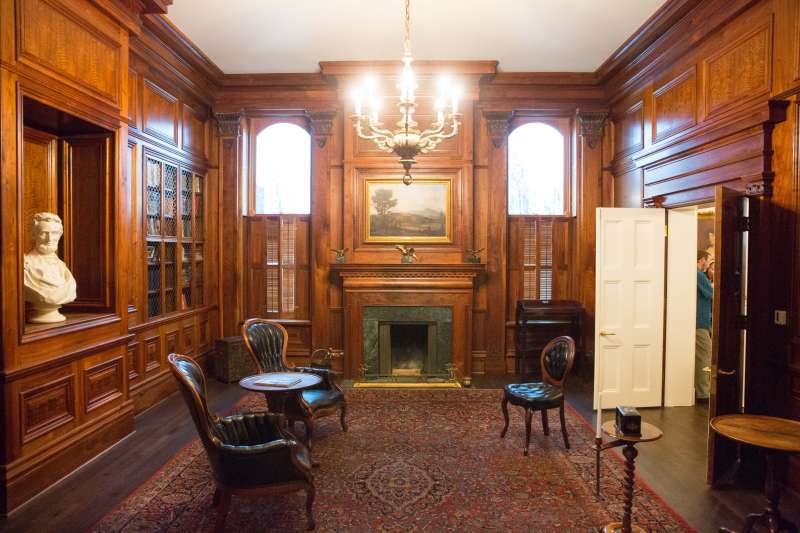 It was the work of architect John Mills Van Odsel, Chicago’s first professional architect and designer of Chicago’s City Hall, the Chicago mayor’s house and Cook County Courthouse. Its design reflected the southern influence of the town’s population, with a modified Georgian style that complemented the Greco-Roman style of other government buildings. While it carried a distinct touch of Europe, one thing made it very Springfield: its exterior of locally-manufactured red pressed brick, said to be of the very highest quality in the Union.

Governor Matteson and family moved in on January 10, 1856. And since that day, every Illinois Governor has stayed in the building.

The Executive Mansion, as it was then known, hosted all manner of Springfield events. Not only was it used for official functions, but also weddings and parties.

As times changed, so too did the building. Its upkeep was provided for by the Illinois General Assembly, but by the late 1880s, it was beginning to show some age. It was remodeled in a Victorian style, with its interior walls and ceilings made colorful with rich stenciling. And, in what was perhaps a questionable call, its distinctive red brick exterior was painted white in an effort to make it look more like The White House. 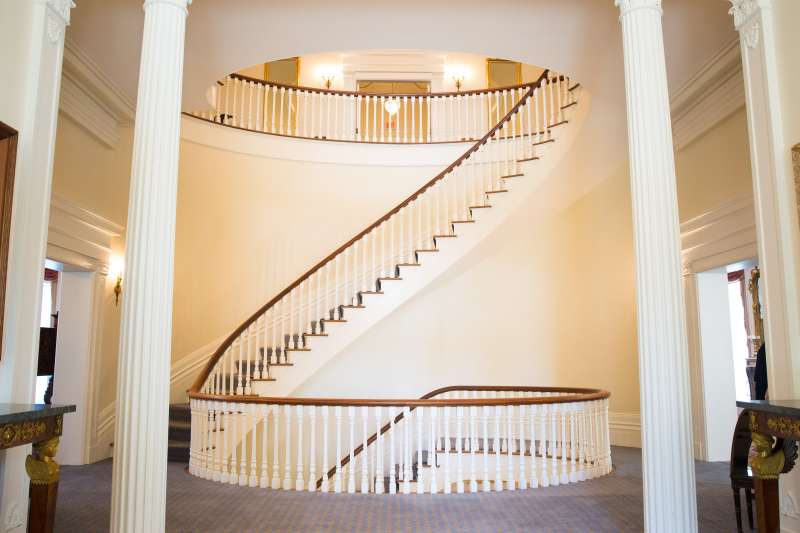 When Governor John Tanner arrived in 1897, the house was starting to suffer. It needed strengthening, and new plumbing. A grand spiral staircase had commanded the building’s interior, but by this point, it was nearing collapse.

So the Governor’s wife Cora, along with Springfield architect George Helmle, started a major remodel. Elements of the interior’s redesign drifted from the original Greek Revival style, and the signature spiral staircase was replaced with a more traditional square staircase—though it was still fairly impressive. The renovation also saw a portico added to the front entrance, and the enclosure of the fifteen-foot cupola atop the building. The interior woodwork was also painted red—though this decision would be reversed by Illinois’ next First Lady, who painted it black with gold flecks.

Subsequent inhabitants continued to stamp their own mark on the building. But by 1941, the 86-year old building was again facing trouble, with termite-infested floors and weakening walls and ceilings. Governor Dwight H. Green was faced with the question of whether the building should be repaired, or replaced. 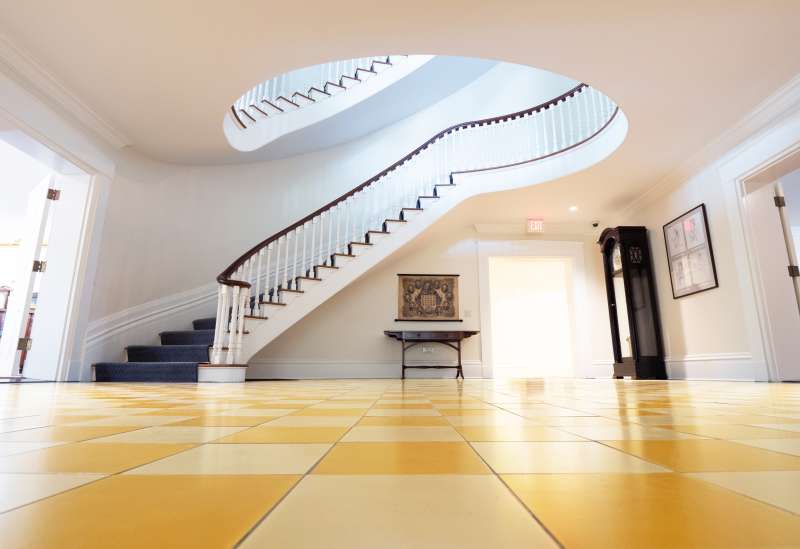 Fortunately, for the sake of Illinois history, the governor and the legislature decided the building should be preserved on account of its historical significance and architectural quality. And although the legislature briefly considered a replacement in the 1960s, the subsequent decades have seen programs of improvement and expansion maintain the building’s important place in Illinois history and life. The efforts of everyone that helped protect and champion the building saw the Mansion become part of the National Register of Historic Places in 1976.

A new lease on life

Though many people have supported the Mansion through its many decades, in recent years it again fell into disrepair due to neglect and underinvestment. Though still beautiful, it had issues that meant its ongoing safety and stability could not be guaranteed.

In 2015, a privately funded $15 million renovation project led by Governor Bruce Rauner and First Lady Diana Rauner kicked off.  Aimed at bringing the once majestic mansion back to its former glory and ensuring its structural integrity for years to come, the project also brought it up to date in important ways, such as full ADA accessibility and improved fire safety.

The project has also seen improvements to how the Mansion will welcome visitors. It’s long been a popular spot for tourists, but now, seven days a week, they’ll find a renewed visitors’ center, historic exhibits, expanded programming and visiting hours and reimagined public spaces that showcase Illinois’ fine and decorative arts. 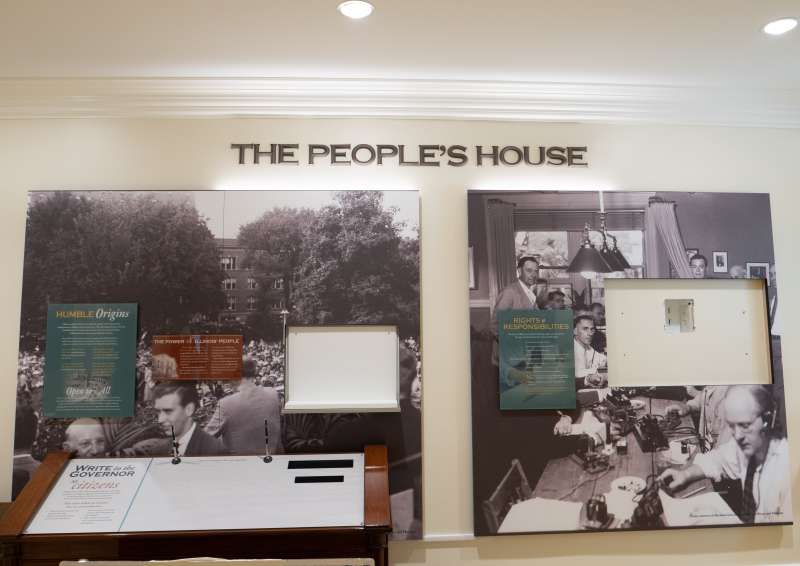 While it’s called the Governor’s Mansion, it’s also known as the People’s House. It’s a symbol of the state of which all Illinoisans can be proud, and where all are welcome. This latest work upholds a more than 160-year legacy, and continues the efforts of countless people through the decades—be they governors, first ladies, state officials or everyday Illinoisans.

It’s not its first renovation, and we can hope it won’t be its last. But for now, the building is there for all to enjoy and explore, and surely will be well into Illinois’ third century. 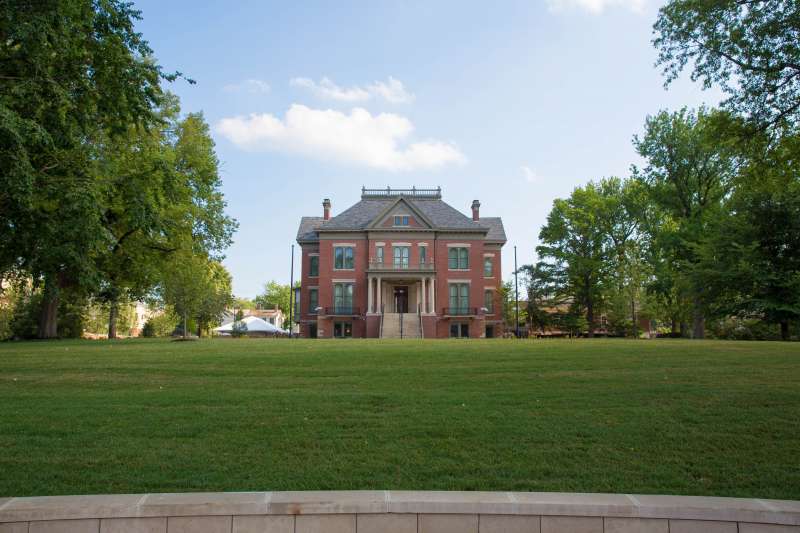 The Illinois Governor's Mansion is open most weekdays for public tours between 1 p.m. and 4 p.m, with limited availability on Saturdays and during Legislative Session. The Mansion is closed for tours on Sundays, state holidays and during official functions.

You'll need to make a reservation in advance (click here to take care of that), and exact availability will be displayed at the time of booking.

If you would like to request a tour that doesn't fall within touring hours, please contact the Governor's Mansion directly. They will make every effort to accommodate special requests.

Full details of the tour, including booking, accessibility and security information are available in the Governor's Mansion Tour Policy. Take a look to ensure the best tour possible.

With its restoration complete, there's never been a better time to visit the Illinois Governor's Mansion. Share your experience with the rest of us by adding your stories, your snaps, and your top tips to the Enjoy Illinois Facebook page. Hashtag #EnjoyIllinois and we’ll all be inspired by your adventures!