In a workshop in Rockford, artisans turn old elevator shafts, planes and salvaged wood into unique works of art.

Home You are in… Get Inspired » MainFraiM

While working as a printer and framer in his hometown of Rockford, Jeremy Klonicki noticed the city had an abundance of reclaimed materials. Feeling inspired, he began creating custom frames on the side.

While working as a printer and framer in his hometown of Rockford, Jeremy Klonicki noticed the city had an abundance of reclaimed materials. Feeling inspired, he began creating custom frames on the side. His collection of salvaged pieces quickly grew, and before long, Jeremy began incorporating experiments such as lighting into his displays. Fellow artist Carmen Turner joined in the fun, and the two grew their offbeat commissions into a business all its own, MainFraiM.

True to its origins, reclaimed materials are at the heart of every piece MainFraiM creates. They produce frames, lighting installations and sculptures using things and doodads from old garages, vehicles, farms and buildings. No two pieces are the same because no two materials are the same. Each salvaged item presents a new challenge for Jeremy, who lets the unique beauty of each material inspire the final creation.

“I draw a lot of inspiration from the craftsmanship that actually went into the materials that I’m reclaiming. I’m just very impressed by the skillset they had back in the early 1900s and late 1800s, using way less tools and technology than we have today.”

Each piece is thoughtfully crafted, so a smaller frame can come together in a few hours, while larger displays can take weeks to produce. Regardless of the size, every piece is a chance for MainFraiM to recontextualize the old and make it new—all while creating something anyone would be proud to put in their home.

At first Jeremy and Carmen collected all the reclaimed materials themselves, but now that word has spread, people from Rockford and afar bring in their own unwanted items with the potential to become something beautiful. One of Jeremy’s favorite creations is the 17-foot chandelier in the Prairie Street Brewhouse, which he crafted from pieces of the original 1900s building when the brewery converted the space in 2009. Featuring parts of the old elevator shaft and copper pipes, the 1,000-pound chandelier is a true work of reclaimed art.

“The chandelier is probably my favorite piece, just because of the interconnectivity to the building, putting it right back into its own home.”

MainFraiM doesn’t just regenerate old materials, however—they’re also part of the blossoming art scene helping to regenerate Rockford. There’s a real sense of community in their workshop. Jeremy and Carmen share their space with other artisans, whose skills and expertise they often draw on to find new ideas for MainFraiM’s pieces. Working in a hotbed of creativity is important to Jeremy, and he credits the help he received from the artist community for getting MainFraiM off the ground.

“You know, 6 or 7 years ago, when I was a young, budding artist, I had no idea what I was doing. My elders were willing to take some time with me and also teach me some tricks. That’s been really helpful because I couldn’t have done it myself.”

Today, Jeremy repays that debt by turning the very community around him into works of art. Strolling through the space, visitors can pick up a piece for their home, find inspiration for a future project, or simply explore the stockpile, which MainFraiM touts as a “Habitat for Art”—a place for once-forgotten items to shine with a new spirit that could only be called Illinois Made. 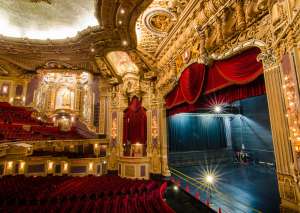 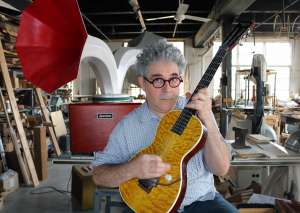 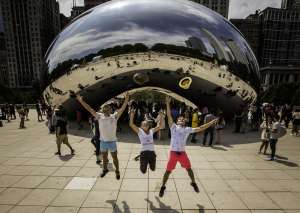 A trip to Illinois would not be complete without a visit to Chicago’s famed Mill...