Home You are in… Illinois 200 » Buffalo Rock State Park

Buffalo Rock State Park in Illinois is the pocket-sized baby sister in the Starved Rock, Matthiessen, and Buffalo Rock triumvirate of State Parks that brings visitors to LaSalle County.

The park is a favorite family picnic stop, and a beautiful place to stretch your legs, with a mix of prairie and woodland, not to mention some world class land art (more on that later).

Before we visited Buffalo Rock State Park we wanted to find out more about its history. The Illinois Department of Natural Resources website teases with hints of exciting historical goings on, so we whipped out our very best Googling skills and set about finding more.

Many hours of hard keyboard bashing later, we’re excited to bring you (probably) the most comprehensive history of Buffalo State Park assembled since Messers O’Sauer, Cady and Cowles wrote that rollicking tome Starved Rock State Park and Its Environs in 1918. 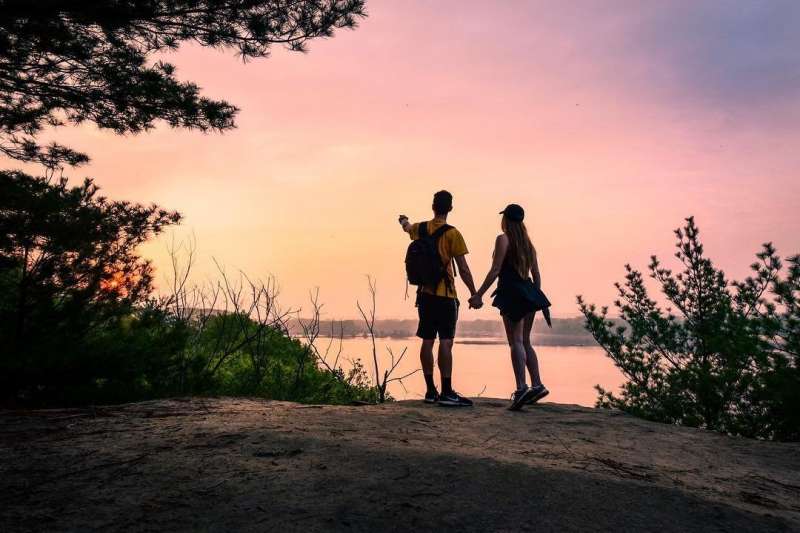 Overlooking the River. Photo by @thedean0195

Internet legend has it that Buffalo Rock takes its name from its blind canyon, where local Native Americans herded bison into a killing field. The dramatic sandstone bluff that gives the park its name was once an island in the Illinois River. In 1673, when French explorer Louis Jolliet and Jesuit missionary Father Jacques Marquette made their trip up the Illinois River, the land around Buffalo Rock was home to the Illinois and Miami nations.

In 1682 French explorer René-Robert Cavelier, sieur de La Salle and his lieutenant, Henri de Tonty, built Fort-Saint-Louis at nearby Starved Rock. The local tribes were being fiercely harried by the Iroquois. Thousands gathered at Fort-Saint-Louis seeking protection and formed a confederation against the Iroquois. Among the tribes in the confederation were the Miami, who built a fort on Buffalo Rock.

By 1702 Fort-Saint-Louis was abandoned. In 1721, Jesuit priest Father Pierre Francois Charlevoix, on his voyage along the Mississippi, observed a Native American village built on Buffalo Rock which his guide named to him as the Fort of the Miamis.

We couldn’t work out from our research when the Buffalo Rock fort was abandoned. It may be related to a bloody incident in 1769 when the Illinois of the Rock were slaughtered in a revenge killing. Certainly the fort was empty by 1825, when Henry TR. Schoolcraft wrote in his book Travels in the Central Portions of the Mississippi Valley, “Our guide pointed out to us the ancient sites of several Indian villages, one of which was situated on the top of a romantic tabular elevation, called the Buffalo Rock.” 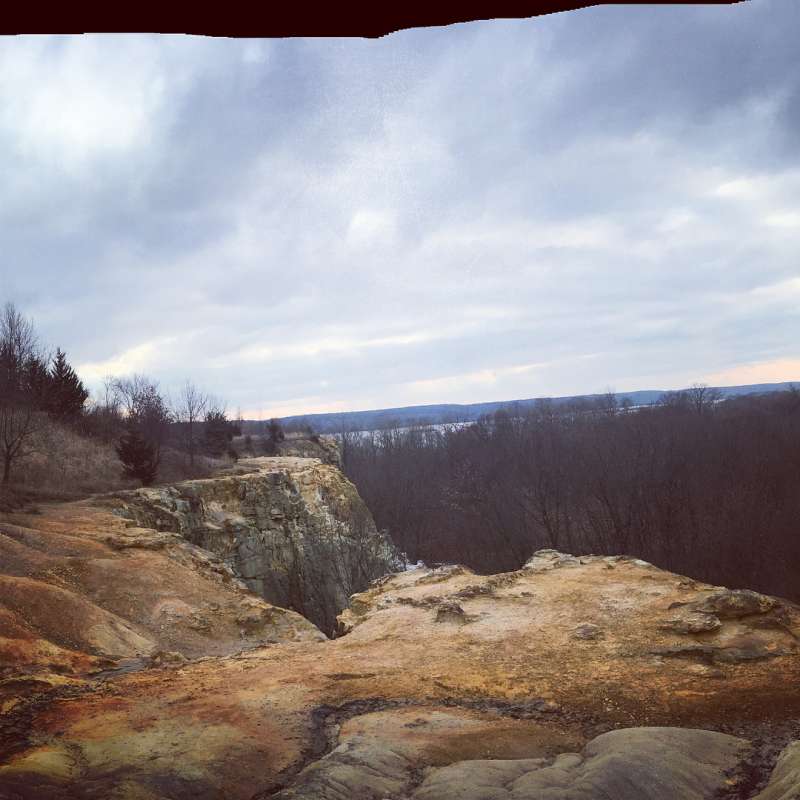 The bluffs at Buffalo Rock State Park. Photo by @cherrysmucker.

In the early 1900s Buffalo Rock became the headquarters of what O’Sauer, Cady and Cowles term “a religious sect.” Sadly, we couldn’t find out any more about that elusive sect, so we invite you to conjure up your most lurid imaginings of religious cults. And then imagine the complete opposite, because the reality was almost certainly a bunch of pleasant earnest people singing hymns in a big tent in a field. But where’s the clickbait in that?

Buffalo Rock next became a sanitarium for the outdoor treatment of tuberculosis. Trawling through digitized old books and newspapers, including the thrilling Class of 1879 Harvard College Secretary’s Report,  we discovered that in 1906 Harvard grad Joseph Pettee Cobb founded The Buffalo Rock Tent Villa Company, “two hours ride from Chicago” and became its president and general manager. The company went into receivership in January 1912, when Judge Edgar Sidridge of Ottawa Illinois, was appointed receiver on application of James Hopkins of Chicago, who held a $500 mortgage on the property.

By the time O’Sauer, Cady and Cowles wrote their fun filled treatise on the local area in 1918 they were pretty darn excited to report that: “A great manufacturing establishment, the Crane Company of Chicago, has made a playground of a part of Buffalo Rock for its employees and is reaping a substantial reward in the increased vigor and cohesion of its personnel.”

From Strip Mine to Art Work

In the 1930s, while the Civilian Conservation Corps was building picnic shelters for the brand-new Buffalo Rock State Park, the bluffs to the west were being strip-mined for coal.

The land bordering Buffalo Rock State Park was a surface coal mine, where coal was extracted from a narrow two-foot-thick seam. The mine closed in 1943, but by the 1980s, the abandoned site was still barren damaged land, littered with piles of shale, with acid run off pooling between the spoil heaps and into the Illinois River.

The site owners, the Ottawa Silica Company, negotiated a deal with the Illinois Abandoned Mining Lands Reclamation Society. The company's not-for-profit foundation would pay an artist to design sculptures for the site. The state would pay for the physical reclamation of the site. Then the company would donate the land to Buffalo Rock State Park as a tax deduction.

In 1983 the Ottawa Silica Company Foundation commissioned artist Michael Heizer to complete five vast earth sculptures, in the form of indigenous animals. The Effigy Tumuli represent a catfish, a water strider, a frog, a turtle, and a snake, ranging in size from 770 to 2,000 feet long. The works were his homage to the tumuli created by indigenous people for over 3,000 years.

The sculptures still stand, but long grass and time have softened their edges, and their sheer scale mean they are best appreciated as a place to admire the vista and muse on the tides of history that have swept through Buffalo State Park. That’s what we did anyway. Then we had a sandwich. That was nice, too.

Back to The Present Day

After all that research, we had to pay a visit. The park is 85 miles southwest of Chicago, about three miles west of Ottawa and five miles east of Utica.

If you prefer to get to the park on foot or on two wheels, the Illinois and Michigan Canal Trail is just across the road, so you could tie a visit to Buffalo State Park into a longer hike across Illinois. The park is only 298 acres, and the flat well-maintained trails make it an easy walk for less intrepid hikers, and a good pick for runners. Several trails are wheelchair accessible.

The main access road to the park winds its way up a sandstone cliff festooned with ferns and moss, with some epic views of the Illinois River as you climb. It’s a lovely introduction.

At the top of the bluff you’ll find the parking lot, and a large shelter with a stone fireplace, which you can reserve for events. The rangers told us that it’s popular for weddings, family parties and company picnics.

The picnic areas are shaded with large oak trees, and well-equipped with picnic tables and cooking grills. When we visited, it was a sunny day, and we could see groups grilling, with kids running around on the grass and playing softball on a baseball diamond. This would be a great park to come with a group of friends. We’d bought a bagged lunch for our hike, but we had major grilled meat envy by the time we’d walked through the picnic area!

Now we have no idea how we didn’t know this, but we didn’t. There are two bison at Buffalo Rock park. Their grazing area is next to the grassy play area. We headed over to take a look and got talking to a couple who were regular visitors. They told us that the bison are called Serenity and Tatonka, and they let us in on another secret that we’re going to share with you, because it really deserves to be better known. 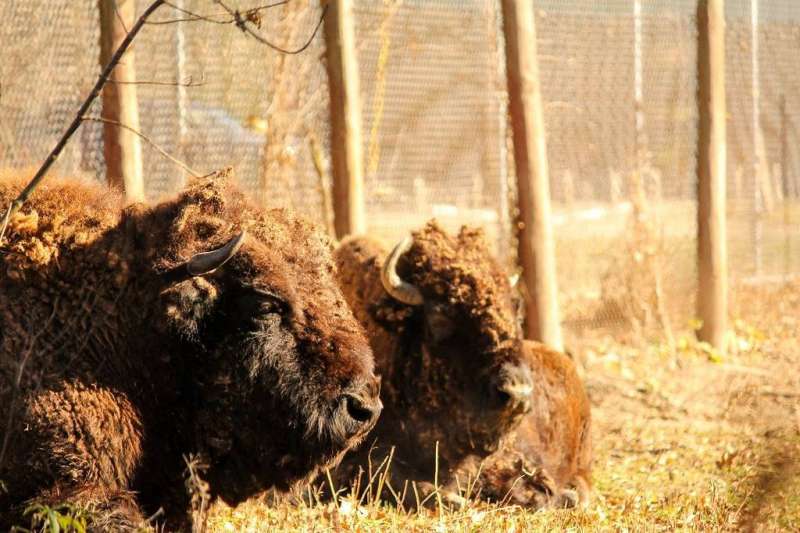 Serenity and Tatonka are rather unusual, because they’re possibly the only bison in the world to have their own beer. Awesome local craft brewery Tangled Roots brewed the Bison Weizen as a 2016 fundraiser to help pay for the colossal quantities of oats the two bison consume. Then they brewed it again in 2017 to raise money for the park, after it was badly damaged by a tornado.

Bison Weizen is a dark wheat beer, brewed using traditional German methods including a decoction mash where a portion of the mash is boiled. I’d like to tell you that the boiled mash then gets fed as a soothing porridge to Serenity and Tatonka, but I’d be lying.

After meeting the craft beer loving ungulates, we tightened our boot laces and hit the trails.

The park has two trails that join in a loop. The River Bluff Trail runs above the Illinois River with observation decks and panoramic river views. The Woodland Trail runs inland into the wooded area of the park and passes the Effigy Tumuli earth sculptures.

(Please note: the Woodland Trail is closed temporarily due to tornado damage.)

We started by walking to the western bluffs. The trail is flat and easy, a wide path with tallgrass prairie on either side. We ambled along enjoying the scent of the wildflowers and the sounds of birds and crickets. Then we reached the edge of the bluffs, where the landscape becomes dramatic. Beautiful colored sandstone cliffs fall to the river below. The rock formations are stunning, and the trail offers fine views over the river. In winter the park is a top spot for bald eagle watching, and we saw pelicans fishing.

Continuing along the river we looped inland through woodland. We climbed the catfish mound to get a better vista of the surrounding area, and then strolled onwards to the turtle and snake mounds. This end of the park is a mix of woodland and sandstone outcrops, and we enjoyed the shade of the oaks, and the many butterflies and dragonflies.

While the water strider, frog and catfish are entirely manmade mounds, the turtle and the snake incorporate the local landscape, with the snake curled around old silica mining pits. We climbed on the snake’s back and looked down its length to its head by the river. Then after a restorative snack, we turned back and took the inland loop through the grasslands and back towards the information center. 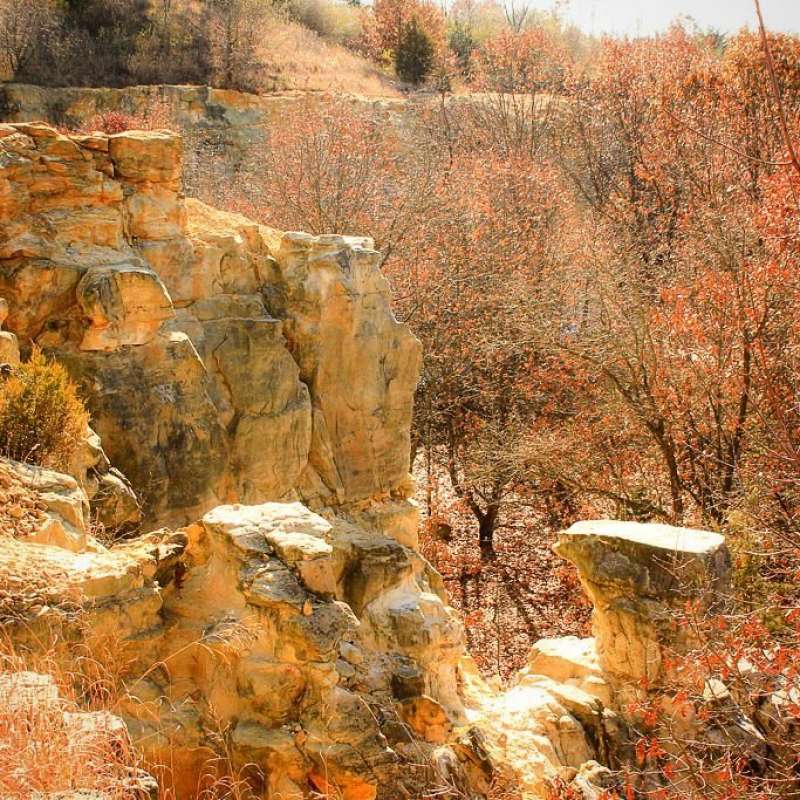 We really enjoyed our visit. The park is quieter than Starved Rock, and although it was a sunny day and there were plenty of visitors, once we got away from the river bluffs, we felt like we were the only people there. So, if you fancy a relaxing stroll that’s easy on the legs, or if you’re looking for a child friendly park for a family picnic, Buffalo State Park has got you covered. Say “hi” to Serenity and Tatonka for us.

As you hit the road and head off to explore Buffalo Rock State Park, don’t forget to share your stories, your snaps, and your top tips with us on the Enjoy Illinois Facebook page. #EnjoyIllinois and we’ll all be inspired by your adventures.