Home You are in… Illinois 200 » Discovering Deep Dish Pizza: A Love Letter

There are many great foods for which Illinois is noted, but for this author’s money, one stands above all else: our deep dish pizza. Originating in Chicago in the 1940s, deep dish is easily the most iconic Midwest pizza style. It’s dense. It’s flavorful.

There are many great foods for which Illinois is noted, but for this author’s money, one stands above all else: our deep dish pizza.

Originating in Chicago in the 1940s, deep dish is easily the most iconic Midwest pizza style. It’s dense. It’s flavorful. You eat it with a fork.

More savory pie than traditional pizza, deep dish is a salute to pizza lovers; a mysteriously deep pan brimming with some of the best and most mouth-watering pizza toppings, delivered to your mouth in a uniquely Illinois construction.

Maybe you’ve already got those basics. What you might not realize, however, is that the world of deep dish is also fairly nuanced.

For most, the term deep dish conjures up vague images of a pizza of indeterminately thick crust with red sauce on the top (hopefully). But deep dish is so much more. True Chicago deep dish is more than its crust or its sauce—it’s an art form. And like all forms of art, each artist has their own distinct style and signature.

From here, deep dish pizza diverges into a variety of distinct sub-styles, each worth individual acknowledgment and appreciation. The three basic deep-dish sub-styles are Classic, Stuffed and Pan. It’s very important that you not only be able to identify these sub-styles, but regularly make time to sample each one. Practice makes perfect after all.

So what’s the difference? What makes each one so uniquely beautiful and worthy to be enjoyed by pizza-lovers the world over? Let’s dive into some deep dish differences and uncover where you can find the best examples of the craft.

The penultimate pie. The granddaddy of dish. The quintessential crust. Classic deep dish is the original Chicago deep dish that put the style on the map in the 1940s.

Hearing the term “deep dish” you might, as many mistakenly have throughout the years, be tempted to think that this pizza has a thick crust. This is a misrepresentation. While some deep dish-style pizzas do have a thicker crust, classic deep dish crust is only thin to medium in thickness, with a crunch more similar to some thin crust pizzas.

This oft-misunderstood crust is prepared using a characteristically deep pan, greased with corn or vegetable oil. The dough tends to be more fragile than traditional pizzas, with a distinct sharp edge where the dough is pressed against the sides of the pan. This crust doesn’t rise in the same way a traditional dough might, but tends to firm as it heats.

Another major difference of the classic deep dish is its slices of mozzarella instead of the shredded cheese ubiquitous in most other pies. If you’re sampling deep dish for the first time, this is where you start. 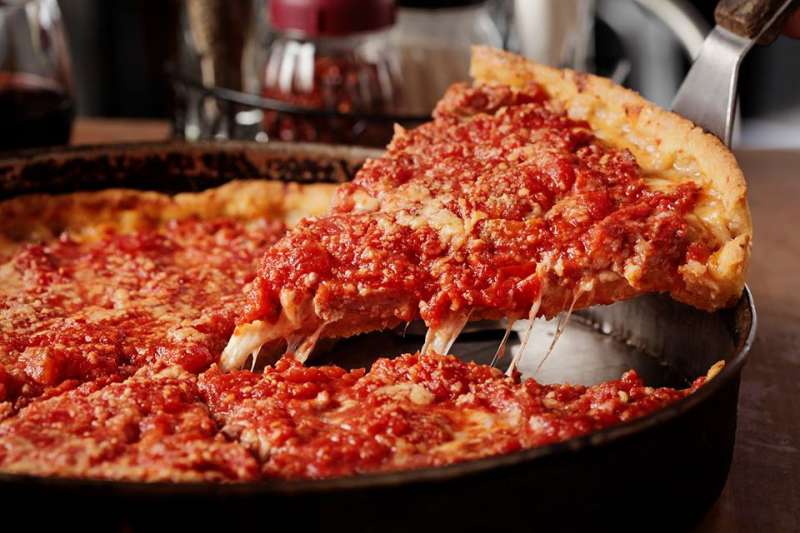 Consistently ranked the best deep dish in Chicago by its residents, Lou Malnati’s is so influential to the style that it’s grown into a full-fledged pizza chain with shops popping up around the state, and even outside it. If you’re in the area and wanting to sample a classic deep dish, this is easily the most accessible (and arguably one of the best pizzas in Chicago). 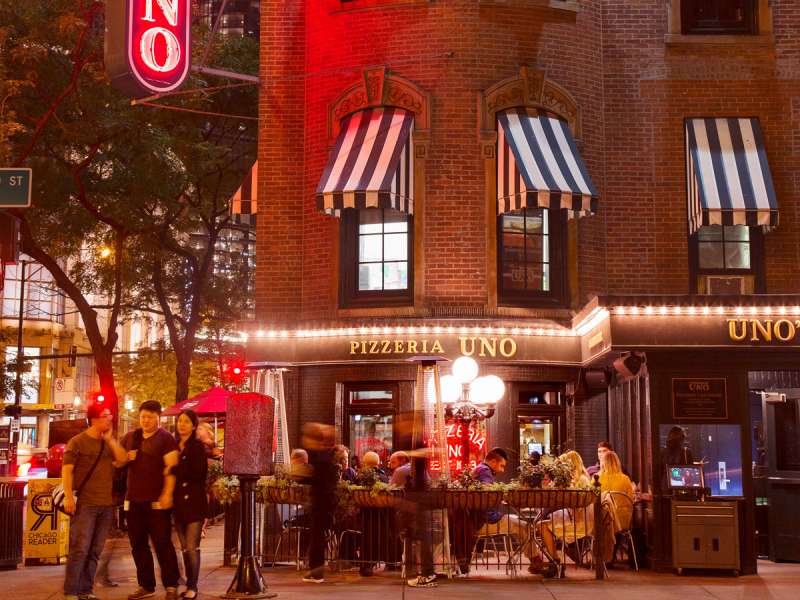 A contender for “creator of the deep dish,” Pizzeria Uno is a Chicago landmark. As THE original deep dish pizza shop in Chicago, Uno has been serving up its signature pies from its same location at the corner of Ohio Street and Wabash since 1943. The history between founder Ike Sewell and Lou Malnati’s recipe progenitor Rudy Malnati Sr. is intriguing enough to make this place worth the visit, but it’s the pies that are paramount here. With a decidedly dense and crumbly crust, Uno’s has set itself apart from other classic pizza makers. Too packed for table service? Head right across the street to its sister location, Pizzeria Due. Same great pizza, but with extra tables.

While all deep dish is an indulgent experience, it’s doubly true for stuffed pizzas—literally double. Stuffed is the deepest and largest of the deep dish family, with a full two layers of pizza packed into its egregiously dense construction: crust, cheese, toppings, crust, cheese, toppings, all finished off with a lake of red tomato sauce. Needless to say, it’s a lot of pizza.

Unlike classic deep dish, stuffed styles feature a thick bready-crust that tends to be less moist, along with a generally more pureed tomato sauce.

These pizzas are not for the faint of heart, or the lactose-intolerant. The sheer amount of cheese in a stuffed pizza could put even the best pizza-eaters in a food-coma. If you can put down three slices, you’ve accomplished more in this life than most of us could ever hope. 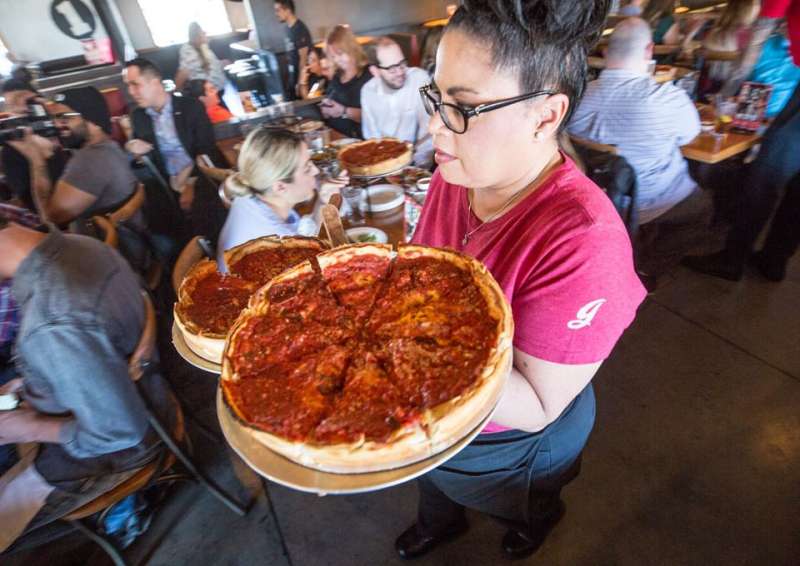 Another Chicago staple, Giordano’s is the easiest way to sample a stuffed pizza. Since opening its doors in 1974, Giordano’s has grown to more than 50 locations. Expect a sweeter crust with lots of mass and the most cheese you can imagine on a single pizza. Digging into this one without a fork isn’t an option, and there’s a lot, so… bring some friends.

A labor of love by a former media professional, Bella Bacino’s is all about fresh, made-from-scratch ingredients. They even have a “heart healthy” spinach pizza that’s recognized by the American Heart Association.

Now when we start talking about pan-style, things get a little dicey. The term pan-style has been used pretty liberally over the past couple decades (I’m looking at you, Pizza Hut), leading a generation of uninformed pizza lovers to mistakenly believe they’re consuming a “Chicago-style” pizza. For shame. 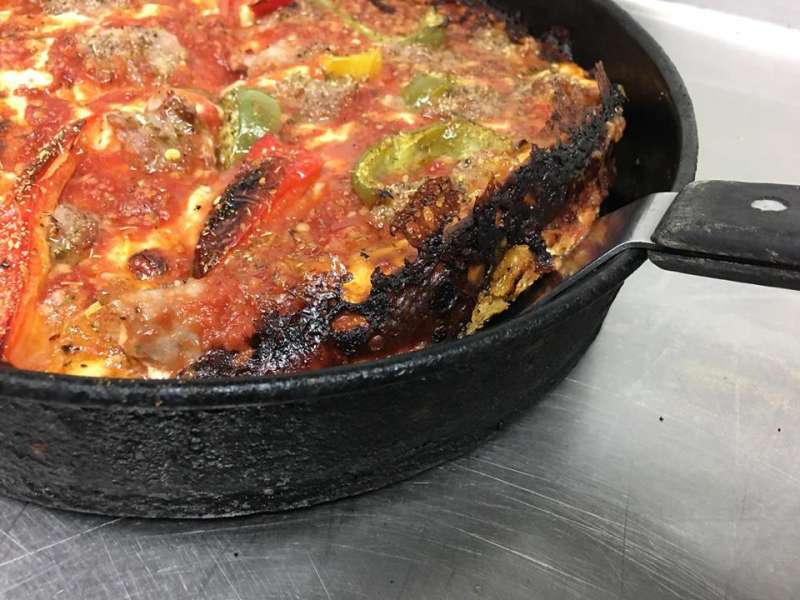 Pizza heretics aside, the major difference here is the crust. Real Chicago pan-style generally uses a process known as parbaking to prepare the crust. With this special process, the crust is cooked halfway and frozen for a time before achieving its ultimate nirvana as a bed for delicious pizza toppings. The crust is similar to a classic in texture, but with a pleasant crispiness and delightful flavor. Although this should go without saying, I’m going to say it: eat your crust!

Low-key favorite deep dish of Chicagoans, Pequod’s is a unique and decidedly-local entry in the annals of Chicago deep dish. With only two locations in Chicago and Morton Grove, you may need to grab an Uber, but it’s absolutely worth the trip. Voted one of the Top 5 Pizzas in America by the Food Network, the game-changer is their signature caramelized halo of cheese baked into the edges of the crust, adding a nice blackened-crisp to an already stellar pie.

A true pizza pioneer, the eponymous Burt is the stuff of legend. He was the true founder of Pequod’s, and then went on to open Burt’s Place in 1989, his third successful pizza venture. Burt’s Place has earned international recognition and brought travelers from around the country and around the world to experience its expertly refined flavors. After hanging up his hat in 2015, two passionate investors made an agreement to carry on Burt’s legacy to his exact specifications, training with the pizza-maker for four months to learn his iconic pan-style technique.

Now please, don’t delay. Get in your car, drive to your nearest deep-dish purveyor and get to the business of pizza. Your stomach will thank you.