Home You are in… Illinois 200 » Glacial Park: The Gem of McHenry County Conservation District

Though “glacial” is in this park’s name, if you’re looking for a glacier, you’re about 12,000 years too late. But not to worry.

Though “glacial” is in this park’s name, if you’re looking for a glacier, you’re about 12,000 years too late.

But not to worry. Though glaciers departed long ago, they left behind something very special: a diverse mix of prairie, savanna, wetlands and rolling hills, all in one 3,400-acre park. Welcome to the gem of McHenry County Conservation District: Glacial Park.

Glacial Park’s diversity means there’s a lot to see and do. But its most distinctive feature is its series of kames. They give you a fascinating glimpse of how this part of the state was formed.

Not familiar with kames? Here’s the basic geology lesson. As the glaciers melted, they left behind large sand and gravel deposits in depressions on the ice. As the ice melted further, the deposits settled as mounds. Over the next few thousand years, soil gradually covered them, grass took hold, erosion did a little sculpting, and now, you’ve got a beautiful park full of hills, otherwise known as kames. They’re a striking sight, emerging from the otherwise flat prairie. Apart from being a scenic delight and geological curiosity, they’re a highlight of the hiking trails. Thanks, nature!

They’re fairly easy hikes in Glacial Park and offer so much to see. There are about five miles of trail, which you can take in sections, or as a loop. If you want to see the park at its best, try the Deerpath Loop Trail. It’s about 2.1 miles of a self-guided, interpretive trail that takes you through woodland, grassland, savanna, prairie and marshes and bogs—more leftovers of the glacial times. If you want a bit of a challenge, take the 105-foot Camelback Kame. 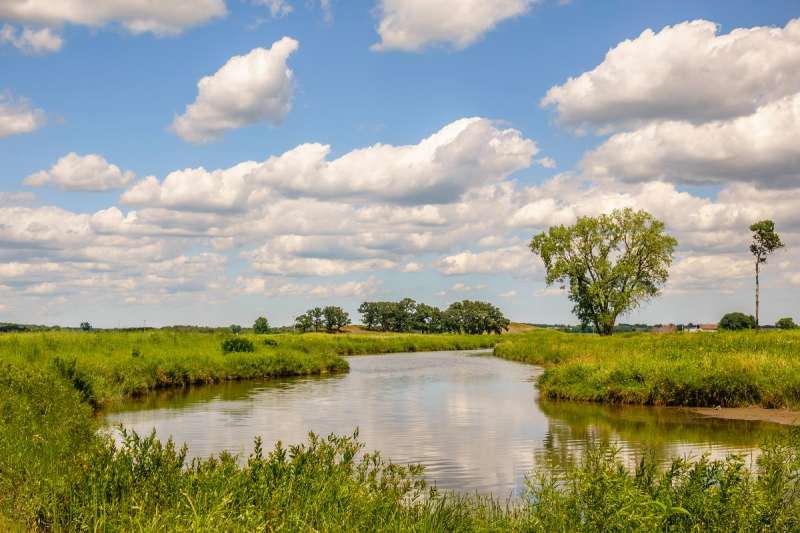 The gorgeous, meandering Nippersink Creek passes through the park on its way to the Fox River. Its slow current makes it a perfect choice for a relaxed paddle through the prairie, wetlands and past the kames.

Through the crystal-clear waters you might glimpse some of the 40-plus species of fish that call the river home, including bass, bluegill, channel catfish, walleye, carp, bullhead and green sunfish. That diversity makes it a much sought-after destination for anglers—you can cast at Keystone Road Landing or Pioneer Road Landing.

The riverbanks are also a wildlife haven. You might see or hear red-winged blackbirds, great blue herons, white egrets, kingfishers and swallows, all thanks to the park’s 490 acres of dedicated nature preserve.

Nature has worked its magic in Glacial Park for many thousands of years. But lately, a little human intervention has returned it to—and kept it at—its best.

Staff and volunteers have dedicated themselves to restoring the area’s natural state, removing invasive plants, rebuilding wetlands and even returning Nippersink Creek to its natural, more meandering path.

The highlight of all this is the nature preserve at the park’s heart. It’s a sanctuary for more than 40 state-endangered plant and animal species, turtles and wild turkeys among them. You’re also likely to spot badgers, woodchuck, frogs and muskrats. And birds—a lot of birds. It’s one of the five top places in the region to see migratory birds. You’ll likely see hundreds of them during a fall sunset.

Of course, before you do any of this, it’s worth stopping in at the Lost Valley Visitor Center. There, you can explore exhibits about the park’s history, find maps and guides and rent snow shoes—oh, did we not mention the winter fun?

The glaciers are long gone – but snow and ice still visit every winter. That’s when the park takes on a whole different character. You can explore in snow shoes, go cross-country skiing, snowmobile on nine miles of trails or sled down the hills. Look around at all the white, and you might be able to picture what it was like 12,000 years ago.