Illinois’ Bicentennial is a celebration of who we are, but also how we got here. It’s a chance to reflect on the state’s rich history, and to pay tribute to the people and places that makes Illinois the state it is today.

Illinois’ Bicentennial is a celebration of who we are, but also how we got here. It’s a chance to reflect on the state’s rich history, and to pay tribute to the people and places that makes Illinois the state it is today.

So it’s a great opportunity to get out there and experience destinations where Illinois history was made. In the coming months, we’ll highlight places off the beaten track, but to kick off, here’s some of the top must-visit historic treasures across the state.

Springfield has been Illinois’ capital for nearly 180 years. But go back to those first two decades of the state’s existence, and you’d find the capital in one of two other places.

The first was Kaskaskia. Before Illinois state ever existed, Kaskaskia was a bustling regional center of some 7,000 residents. It became the county seat of Illinois County, Virginia. And when Illinois was admitted as the 21st state in the union in 1818, Kaskaskia got its biggest moment in the spotlight when it was chosen as the capital. A two-story brick building served as the first Capitol, housing the twenty-nine legislators of the House of Representatives downstairs, and the state’s fourteen senators upstairs. There, Illinois took its first steps towards what it would become today.

But it was only the first steps. The very next year, the newly-created, more-central Vandalia became the state capital. And while Kaskaskia remained a beautiful riverside community, that river would be its undoing. Repeated flooding over the centuries has reduced its footprint and population to tiny fractions of their former selves. 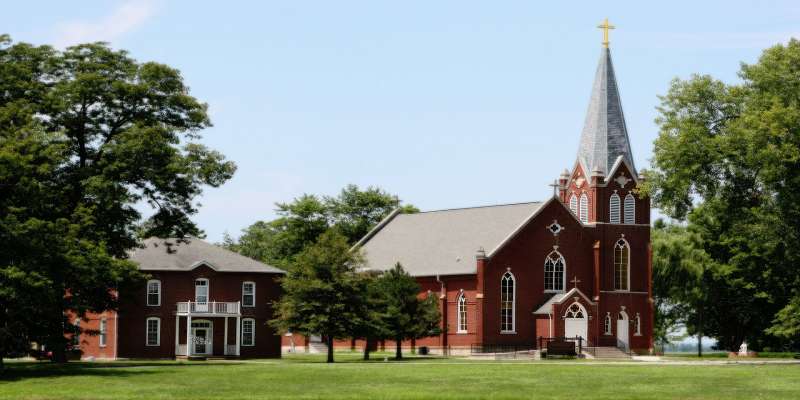 Where once it was the center of Illinois government, today it’s the state’s smallest town with only thirteen residents. But those thirteen residents form a strong and proud community, and for anyone wanting to connect with the full scape of Illinois’ history, it’s a must-visit. 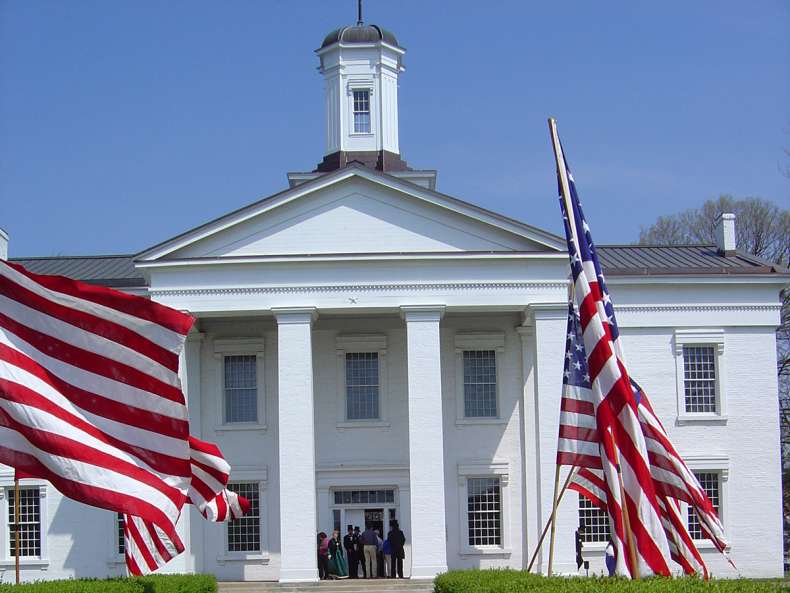 Unlike Kaskaskia, Vandalia’s history goes back only so far as its history as capital. Recognizing the capital would need to move from Kaskaskia to somewhere more central, Congress committed to donating the necessary land to Illinois, and five Illinois commissioners set out to find the perfect spot.

They found it in May 1819 at a place called Reeve’s Bluff, and after eighteen months of hurried building, the new city of Vandalia was ready in December 1820 for a meeting of the Illinois General Assembly. At that first sitting, they declared it would be the capital for the next 20 years.

And it was, though the capitol building itself went through a few iterations. The first building was destroyed by fire in December 1823. The next was constructed in haste the next summer by locals, who thought the capital might get shifted elsewhere if they didn’t act quickly. Unfortunately, that haste doomed the building. Just one decade on, it was too dangerous to occupy. But even in this brief time, it saw a lot of history happen, including the arrival of one Abraham Lincoln to his first political office.

The third and final capitol was of a much sturdier and fit-for-purpose design, but it would see little use. Construction began in 1836, but by 1839, the capital was on its way to Springfield. Still, Vandalia’s legacy lives on in that building, which still stands today. Each year, 30,000 visitors make their way through its doors, nearly 180 years after it ended its tenure as capitol. To visit today is to experience a sense of where Illinois began to mature. 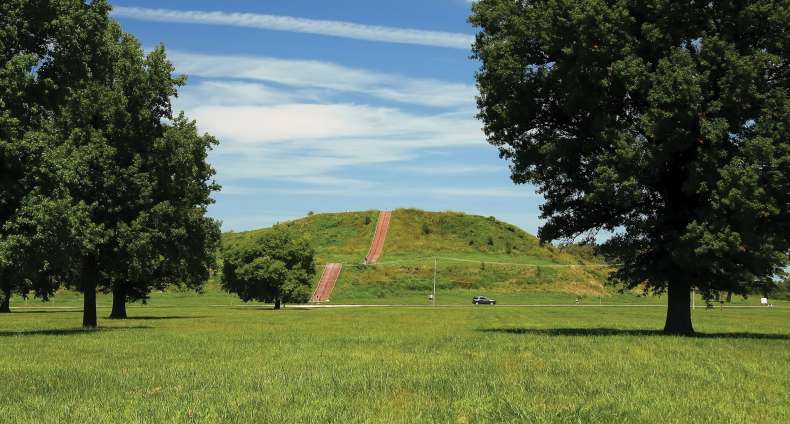 Visit any of the places on this list, you’ll get a good dose of history. But here, you get history that stretches a lot further back.

The Cahokia Mounds is what remains of a once-bustling Native American city, circa 700—mid-1300s. It’s original name has been lost to time, along with most details of why people came there, and why they eventually left, but any visit will leave you with a strong sense of what was a large, complex, and sophisticated society.

Today it covers about 3.5 square miles, but if you were there a thousand years ago, you’d be standing in a settlement nearly twice the size, in a population of an estimated 40,000 people. That’s a population equivalent to that of London at the same time, and one that wouldn’t be surpassed in the land that would become the United States until Philadelphia in the 1780s. It’s little wonder Cahokia is a State Historic Site and a UNESCO World Heritage Site.

When you set foot here, you connect with one of Illinois’ oldest pieces of history. And it’s easy to do so. Cahokia Mounds is open every day, with easy access from surrounding highways. 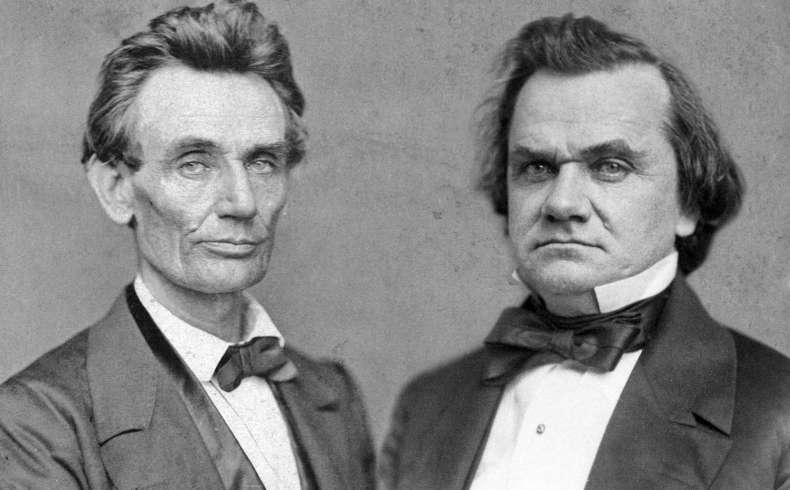 This year marks 200 years of Illinois, but it also marks 160 years since another important milestone: the Lincoln-Douglas debates.

These debates saw Abraham Lincoln and Stephen Douglas face off seven times around Illinois, all focused on a single issue that would define the coming years in America: slavery.

It was an electrifying series. Thousands of onlookers (20,000, in one case) took in each debate, each of which lasted several hours. They weren’t cloistered away in halls; they stood outside in the elements, setting their marathon arguments against Illinois’ summer and fall skies.

Lincoln pursued the debates in hopes of winning election to the United States Senate. He was unsuccessful in that regard. But the nationwide attention given to the debates, and to the strength of Lincoln’s arguments and oratory, paved his way to the presidency.

Today, each of the seven places where Lincoln and Douglas stood before the crowds remain preserved as a monument to that time in our history.

Here’s where it all began, back in August 1858, before an estimated crowd of 20,000. Visit Washington Square Park to commemorate the occasion, before larger-than-life statues of the two debaters.

The location of the second debate. Today, the site is marked by a boulder and plaque dedicated by President Theodore Roosevelt in 1903, and life-size statues “Lincoln and Douglas in Debate” by Lily Tolpo.

The third debate site is home to another pair of life-size statues, amidst leisurely walking loops, and a beautiful Memorial pond.

Along with the requisite statues, here you’ll learn a lot about the entire series of debates at a dedicated museum. If you’ve visited the other sites, it’ll give you a new appreciation of them. If you haven’t, it’s a fantastic introduction.

This building backdropped the fifth debate, and it’s the only built debate site to remain. Rumor has it Lincoln climbed from a window to take the debate platform, and quipped “At last, I have gone through college." Thanks to its status as a National Historic Landmark, you can too.

The site is marked by a bas-relief sculpture by Lorado Taft, dedicated in 1936.

In October 1858, Alton was the site of the seventh and final debate, which drew more than 6,000 onlookers. Though Lincoln and Douglas are long-gone, life-like statues by Jerry McKenna now take their place, complete with abandoned chairs and an abandoned stovepipe hat. 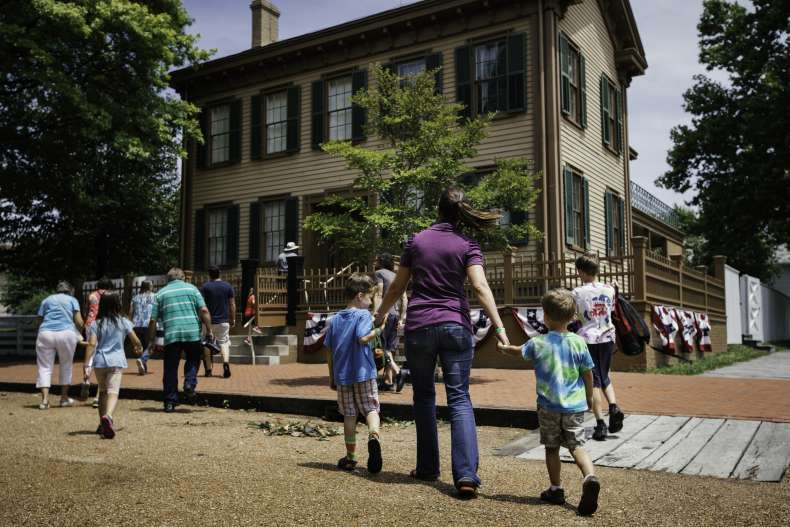 Lincoln owned one home in his life, and it was in Springfield. And it still stands proud today as a national historic site, run by the National Park Service.

Lincoln and his wife bought the house in 1844 from the man that married them, the Reverend Charles Dresser. And in the 17 years Lincoln lived under its roof, the home’s 12 rooms saw a lot of history.

The home was also the place of personal joys, and tragedies. Three of the Lincolns’ four children were born there. One, Eddie, also died there. Today its legacy is as a glimpse into the personal life of a man who would shape the history of Illinois, the United States, and the world. 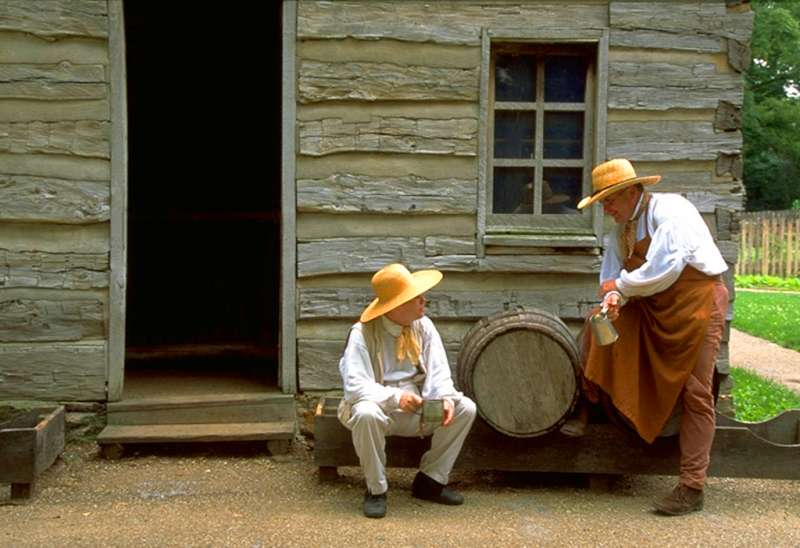 It’s another Lincoln-related site… but it’s so much more.

New Salem was a Menard County frontier village between about 1828 and 1840. A pair of millers built a saw and grist mill on the Sangamon River, then felt it was just the place for a community. It was a thriving place, home to more than 20 families, stores, services, craftspeople, and businessmen.

While it had much to recommend it, the village would likely have faded into obscurity were it not for one of its young residents: Abraham Lincoln.

Young Abe turned up in 1831 at the age of 22, traveling astride a flatboat that got itself stuck on the milldam. Flying into action, he directed his fellow crew, and with the help of a drill, devised a solution to free the boat. It may be an understatement to say it’s the same kind of qualities that took him to the presidency, but it wouldn’t be completely inaccurate, either.

Describing his arrival, Lincoln said he was like a “piece of driftwood”. But he wouldn’t stay that way for long. He immediately got a job as a store clerk off the back of his boat-saving capability. Later, he bought a general store. He became a militia captain. Next he was postmaster—his first government gig—and then a surveyor. He studied to become a lawyer. And he was elected to the state legislature. He gave a lot to the town, and it gave him a lot in return.

Which is why, nearly 180 years after the town met a natural end, a 1930s-built replica now sits on the foundations of what was once there. It’s a village of 23 buildings, where dedicated volunteers bring 19th-century New Salem and Illinois to life.

And while it’s the story of Abraham Lincoln that ensured New Salem endured, the site offers so much more. It helps visitors understand the history of our state, and the kind of frontier environment in which many of our early residents lived. It’s little surprise that it’s Illinois’ most-visited historic site. 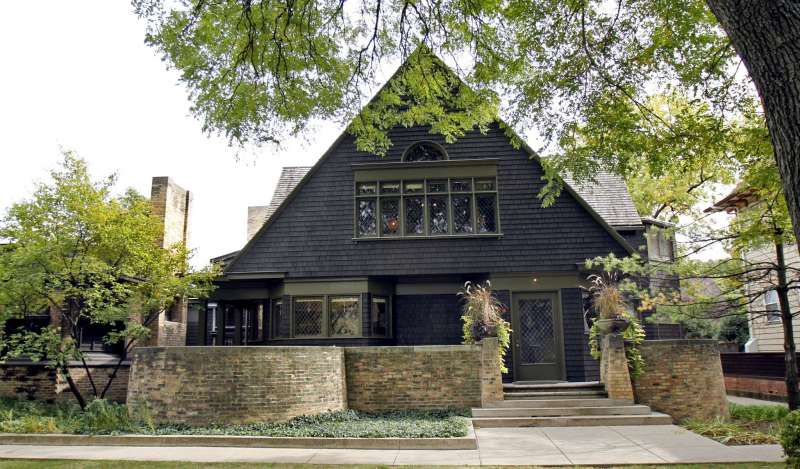 Today, Frank Lloyd Wright is known as one of America’s greatest architects. And that was a legacy built right here in Illinois.

You’ll find Frank’s stamp on buildings all over the state. But if there’s one can’t-miss place, it’s this, the Frank Lloyd Wright Home and Studio, where he lived and worked for 20 years at the start of his own practice.

The Home and Studio is operated as a museum where you can discover the history and importance of Frank’s work, and understand its significance to Illinois and to America.

Heading out to explore some of these historic treasures? We'd love you to share your experience with us on the Enjoy Illinois Facebook page. #EnjoyIllinois and we’ll all be inspired by your adventures.