The bluffs and waterfalls at Starved Rock State Park are undoubtedly spectacular. And the Garden of the Gods in Southern Illinois is hands down incredible. There’s a particular rock, where you can sit looking out over the forest, and even on a busy day it will take your breath away, the view goes on forever.

But the downside of being a famous beauty is that we all want a piece of you.

Which is why, when we started to put together a list of the natural wonders in Illinois, we wanted to celebrate some of the state’s lesser known highlights.

And we didn’t want to go with just our favorites, so we headed over to Facebook to ask you what you thought. And you really came up with the goods. So here they are, Illinois’s beautiful secrets, as told to us by you.

In 1820, Illinois had 22 million acres of prairie land and 14 million acres of forests. From the wooded bluffs of the rivers to the mountains in the south of the state, you could have roamed over grasslands that stretched as far as your eye could see.

And you wouldn’t have been alone. You’d have been part of a rich and fertile ecosystem more than 8,000 years old, surrounded by birds and beasts from the sedge wren to the bison. But by 1978, less than 2,300 acres of prairie remained in the entire state.

Fortunately, the tide has turned, with prairie reserves established across Illinois, and bison making a comeback. In spring 2015, Illinois saw its first wild bison calf born in nearly 200 years. That’s worth a bicentennial celebration right there! Today you can see bison roaming on grassland in four places across the state. 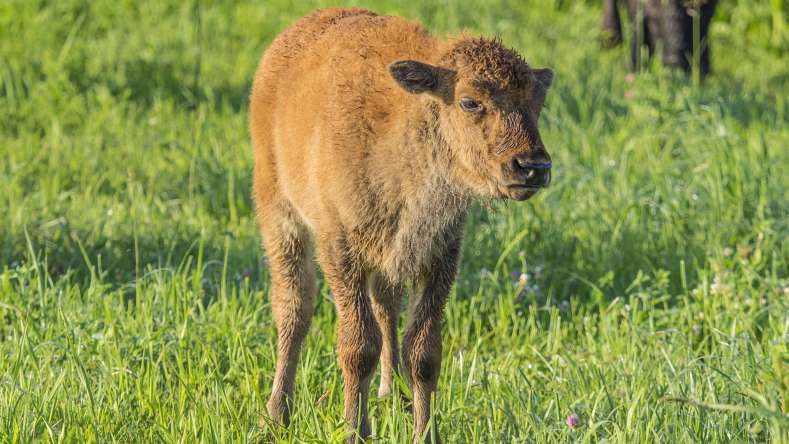 3,500 acres of prairie to the west of Chicago, near Franklin Grove, Nachusa has a herd of 90 wild bison. Stroll out into the grasslands, following the wide-mown paths surrounded by prairie flowers and birds.

Climb the hill to get an overview of the area, and you may get magnificent views of bison and deer grazing on the hillside. Reviews on TripAdvisor are fizzing with excitement from visitors who’ve seen the giant beasts running in their natural habitat. 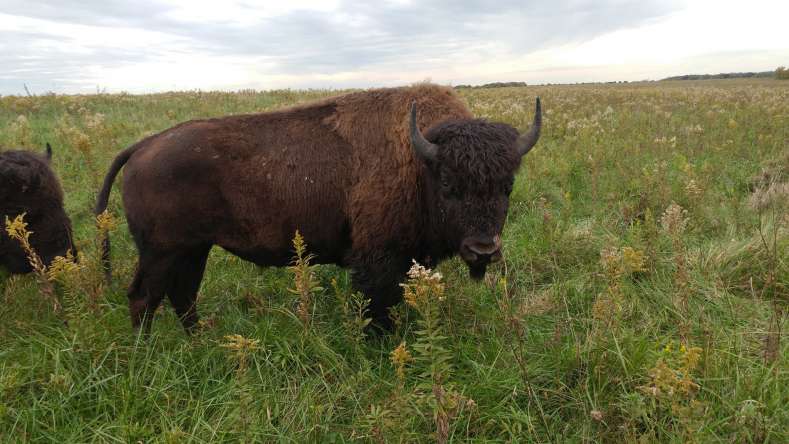 Midewin is 19,000 acres of prairie, reclaimed from the site of the former Joliet Army Ammunition Plant, and the first national tallgrass prairie designated in the U.S., as well as being the largest conservation site in the Chicago area.

In 2015, 27 bison were introduced to Midewin to a 1,200-acre area. They’re part of a 20-year experiment to see if their grazing pattern will encourage native prairie birds and other species to return. The herd had grown to 50 in Spring 2017, and an updated count for 2018 should be coming soon. Guided hikes with rangers to see the bison started in May 2018.

You also told us that some of Illinois’s loveliest natural secrets were hiding in plain sight in the middle of Chicago. Equal parts art and landscape, these treasures bring nature to the heart of the city.

Northerly Island eco-park is part of Chicago’s Museum campus. Once Meigs Field, an airport serving the city of Chicago, the runway closed in 2003 and the park opened in 2015.

Designers reformed the peninsula into a landscape of gentle hills circling a lagoon. A paved walk and bikeway curves through rolling hills planted with wildflowers. Now the prairie is alive and well on Chicago's lakefront. Birds sing, frogs croak, and Canada geese graze around three sculptures of Daphne made from recycled Cadillacs.

Locals come here to watch the migration of the purple martins or cross-country ski in the winter. Early morning, with few people around, it’s a wonderful, peaceful place. Open year-round until 11pm, it’s a beautiful place for a walk at dusk looking back at the city skyline. With no lighting in the south of the park, it’s also one of the few spots for nighttime sky viewing.

Northerly Island is also home to a local secret, 12th Street Beach, a secluded crescent of golden sand south of Adler Planetarium, popular for fishing and swimming, with an excellent view of the city. Rumor has it that if the band at the Pavilion at Northerly Island is sold out, you can sit on the beach and hear them play. Bring a picnic for summer perfection!

Two more Chicago treasures owe their beauty in part to the work of one man, landscape architect Alfred Caldwell.

The Lily Pool in Lincoln Park opened in 1889 to cultivate tropical water lilies, but it had fallen into disrepair when Caldwell came upon the scene.  Seeing how lovely it could be, he redesigned the pool, investing his life insurance to finish the project when it was threatened with budget cuts.

Now a lovely pocket of serenity in the city, and an example of Prairie School landscape architecture, the Lily Pool is listed as a National Historical Landmark.

South of the city, Promontory Point at Burnham Park in Hyde Park offers some of the best skyline views in Chicago. The small peninsula is a popular place for picnics, runners and walkers, a place to escape the bustle of downtown. Designed by Alfred Caldwell on a spit of reclaimed land the park includes a central meadow, fire circles, sculptures and giant stone steps leading down to the water.

The Point plays a fond role in your romantic memories, from first kiss to your wedding day. And so many of you also spoke of the peaceful moments you’d enjoyed there, mediating looking at the waves, the serenity of sitting listening to the lake, or walking in the snow, and falling in love with Chicago all over again. 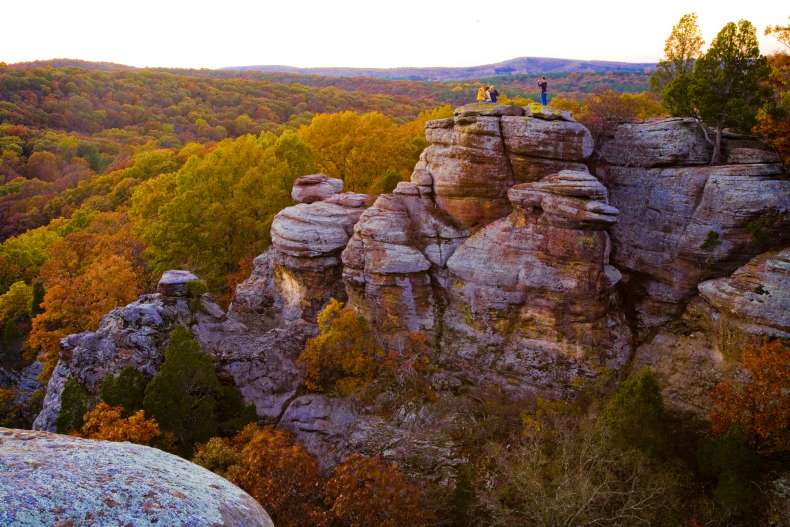 The Ozarks mountain range crosses the Mississippi River to form some of the most beautiful scenery in Southeastern Illinois. Famous for the Garden of the Gods, the Southern Illinois Shawnee National Forest covers hilly terrain untouched by glaciation, and is rich in trails, sandstone bluffs, waterfalls, caves, and swimming holes.

Bell Smith Springs is a stunning series of clear rocky streams and canyons with sandstone cliffs and a natural arch. One landmark is the dramatically named Devil’s Backbone, two huge triangular boulders looming out of the clear water, like massive vertebrae.

A popular summer swimming hole, daredevil local adrenaline junkies leap up to 60 feet off the cliffs into deep pools in the creek below. Trails into the creek pass through interesting rock formations in the forest, and despite being reasonably remote, it can be busy on summer weekends. 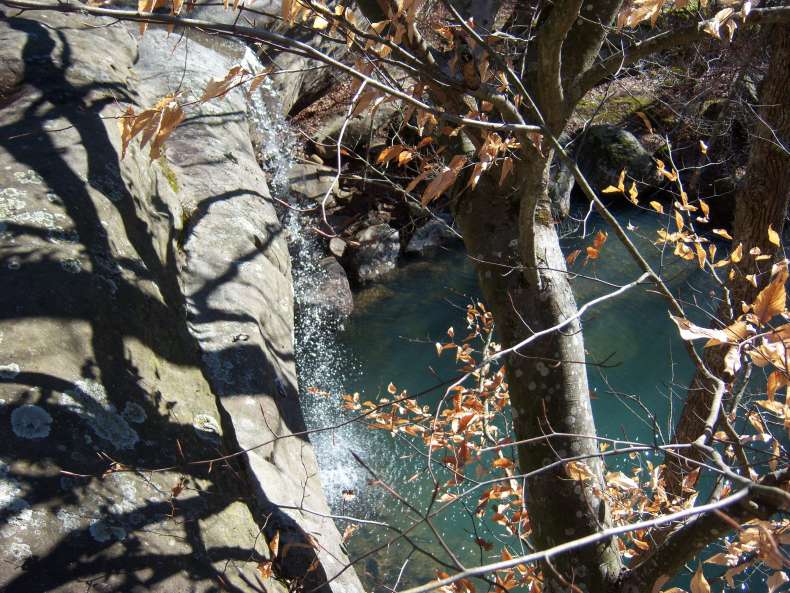 Jackson Falls is famous with rock climbers with waterfalls, 60 scenic climbing areas, and over 500 named routes set along the sandstone bluffs and freestanding boulders. Bork Falls is in Ferne Cliffe State Park. A dip in the waterfall plunge pool, after a summer hike in the park, is one of the great wild swims in Illinois, and you can walk behind the cascade, if you prefer to stay dry. 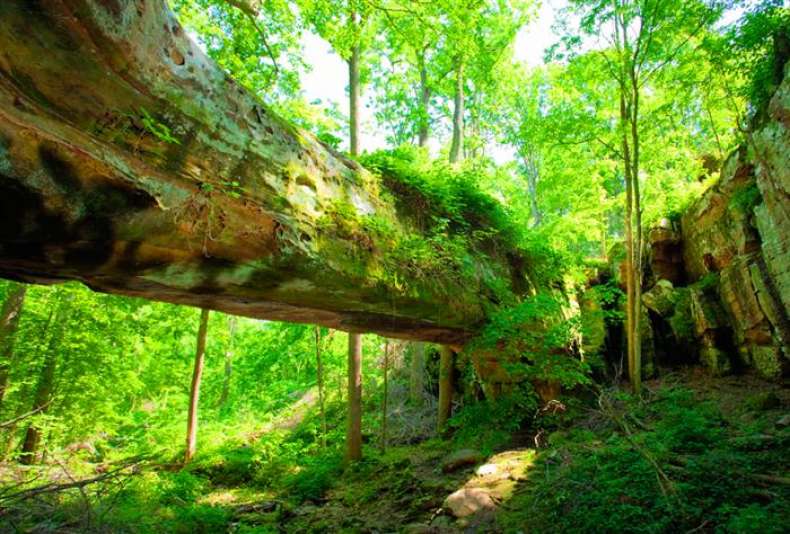 The Pomona Natural Bridge is a 90-foot natural sandstone arch carved by water spanning a ravine. A small cave is a few yards downstream, and it’s an easy hike for kids through the mature beech, oak and hickory forest.

You’ll also be close to the wonderfully inspired by nature Scratch Brewing Company offering forest inspired brews from foraged ingredients, like wild licorice stout. Scratch Brewing is also acclaimed as one of the most beautiful places in the world to drink beer by All About BeerMagazine, whom we assume know what they’re talking about! 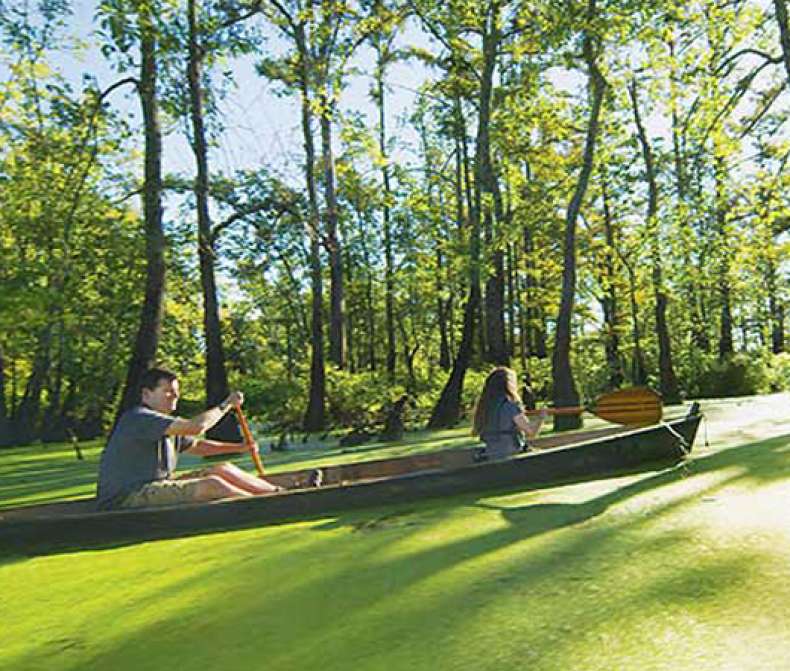 Illinois isn’t all corn fields and forests. There are also some spectacular wetlands, rare ecosystems, that are home to teeming wildlife. 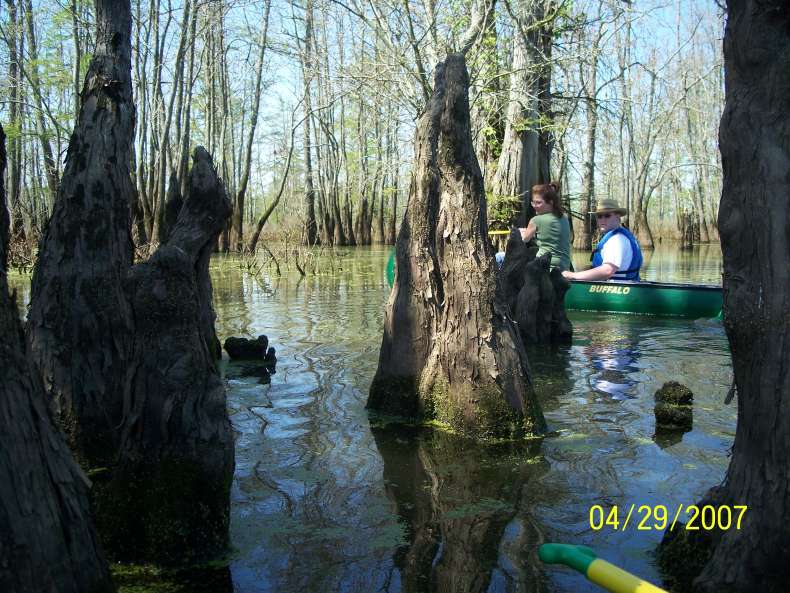 Cache River State Natural Area’s 60,000 acres of forests and wetlands are inhabited by otters, bobcats, whitetail deer, bald eagles, herons and egrets, and it is the winter home to thousands of migrating waterfowl.

The wetlands are a spectacular swamp-scape, with 100-foot tall cypress and tupelo trees, rising from still water rimed with bright green algae. Some of the trees are reputedly 1,000 years old, and the whole area is an ecological treasure containing 100 endangered plant and animal species.

There are 20 miles of hiking trails, but one of the best ways to explore is to rent a canoe or use a guide service. 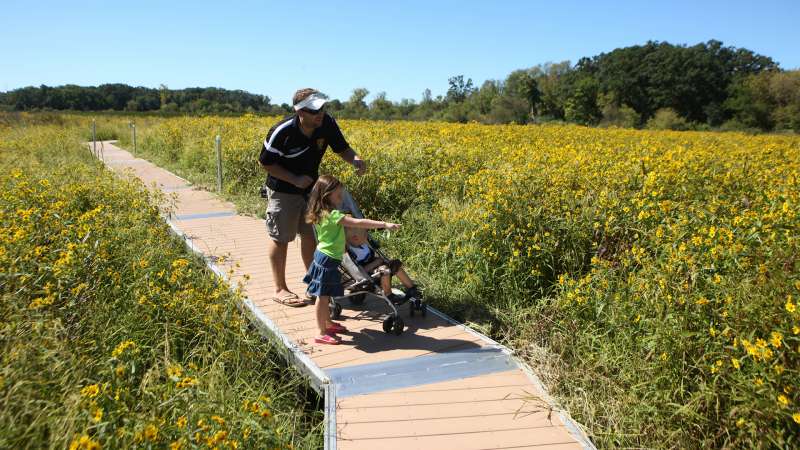 Floating walkways provide a trail to the center of the bog. You may see carnivorous pitcher plants flowering, huge tadpoles and ferns in the spring, herons, sandhill cranes, snakes slithering across your path, hawks, raccoons, and muskrats swimming.

Opt for a guided tour, or simply stroll around the bogs listening to the abundance of life that surrounds you. You never know what you'll see or hear.

As you head off to explore Illinois’ natural wonders for yourself, don’t forget to share your stories, your snaps, and your top tips with us on the Enjoy Illinois Facebook page. #EnjoyIllinois and we’ll all be inspired by your adventures.