Riverside is an entire town that stands as a single work of art, one of the largest ever created, from the designer of New York's Central Park. Explore the unique architecture and landscape design.

*By The Frederick Law Olmsted Society of Riverside[http://www. olmstedsociety. org]* America’s first and greatest landscape architect, Frederick Law Olmsted, left a mighty legacy. You might know some of his works, such as New York City’s Central Park, or the Biltmore Estate in Ashville, North Carolina.

By The Frederick Law Olmsted Society of Riverside

America’s first and greatest landscape architect, Frederick Law Olmsted, left a mighty legacy. You might know some of his works, such as New York City’s Central Park, or the Biltmore Estate in Ashville, North Carolina.

But he left his greatest work right here in Illinois. An entire town that stands as a single work of art, one of the largest ever created.

A vision of harmony and charm

It’s an atmosphere that comes right from Olmsted’s original vision. He designed the town to remove the town’s residents from the stresses of modern urban life as much as possible, living in close harmony with nature, while retaining key modern conveniences (such as a mere 20-minute train ride to downtown Chicago). 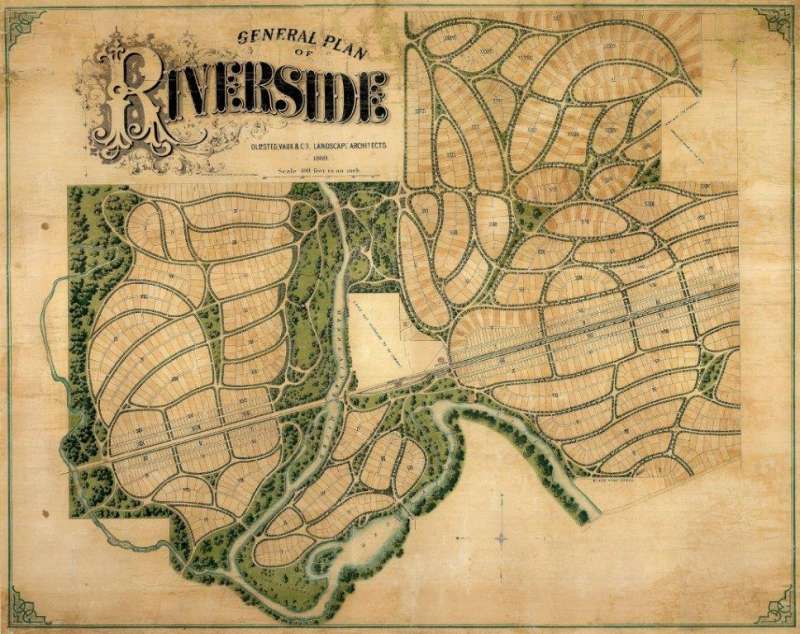 And in many ways, it was ahead of its time. Today, plentiful trees and lush greenery are prized in urban design. After all, we know they’re good for our health and wellbeing. But on this point, Mr. Olmsted was ahead of his time. He had traveled the world and had seen their benefit. In Riverside, he put that kind of hard-won knowledge to work with spectacular results, that makes Riverside deservedly world famous among landscape architects and city planners.

What’s more, with a commitment to fostering a truly democratic society, he saw the town as an inspirational canvas designed to attract people of all backgrounds, in hopes they would unleash their creativity to extend his vision—exactly why Wright, Sullivan, Jenney, and many others came along. 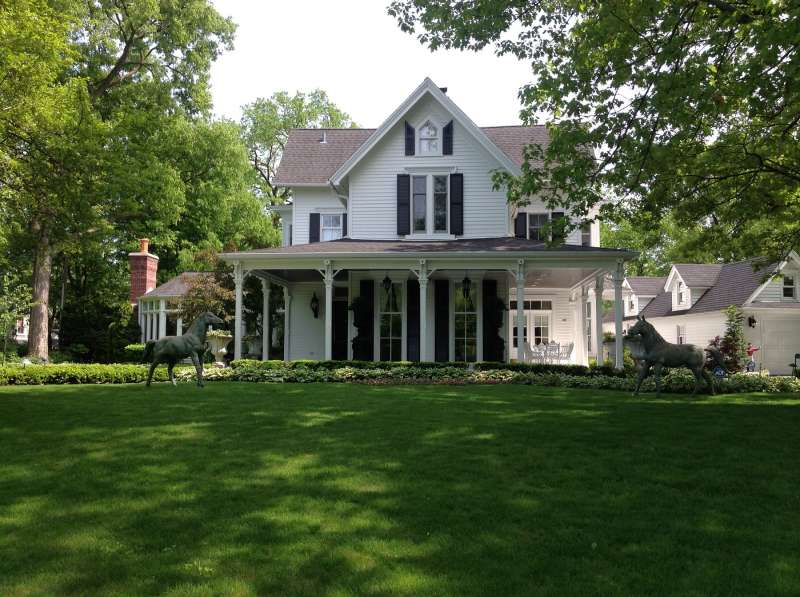 Just as it’s a beautiful place to live, so too is it a beautiful place to visit. Riverside is made for strolling, enjoying fine restaurants (of which there are many), and admiring 150 years’ worth of landscape and architectural genius. It has to be seen and experienced to truly appreciate its many charms.

Seeing Riverside by car is easy, but if you want the best experience, take a stroll or bike ride, a pace more befitting of Olmsted’s day. Doing this, you might just come to reflect on what many of us have given up in our increasingly fast-paced and stressful urbanized environments. 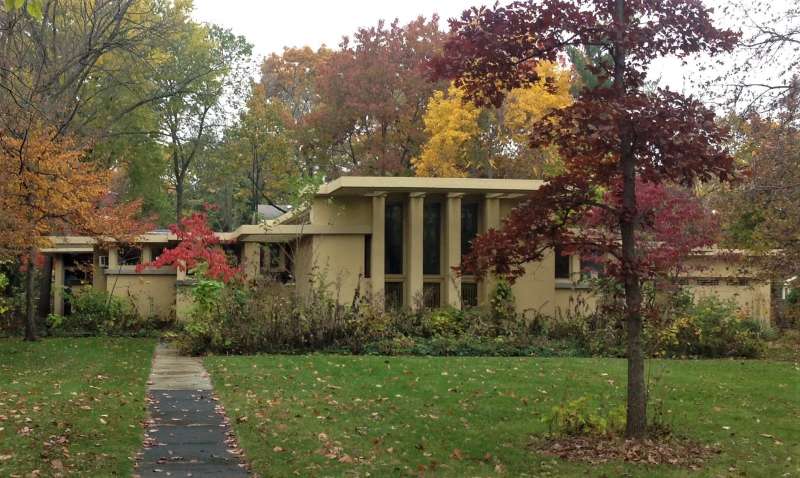 Its gently curving streets can be a little disorienting if you’re accustomed to standard rectangular grid systems. There were no square corners in Olmsted’s Riverside, and no cul-de-sacs. On the ground, it gives the village a rural look and a green contrast to surrounding suburbs. From the air—or even space—its layout serves as a form of modern art.

Olmsted wrote that this, and the generous spaces and set back homes, would lead to “leisure, contemplativeness, and happy tranquility." He was right. Somehow, the general ambiance of the surroundings fosters friendliness and sociability. Even today, everyone says hello to passersby.

Survived and thrived against all odds

That Riverside has survived and ultimately prospered during its 150 years of existence is something of a small miracle. As with many projects of this scope and audacity, things did not go well for the original promoters and investors. The Chicago Fire of 1871 and a financial panic in 1873 put an end to the free flow of needed funds and led to the bankruptcy of the founding Riverside Improvement Company. Olmsted and his partner Calvert Vaux resigned over fee disputes, but they provided the village with a solid plan and infrastructure on which to build. Resident architect William Le Baron Jenney, designer of Riverside's Gothic water tower and inventor of the modern skyscraper, picked up the pieces with his associates and continued work on the town, which survived and slowly grew. 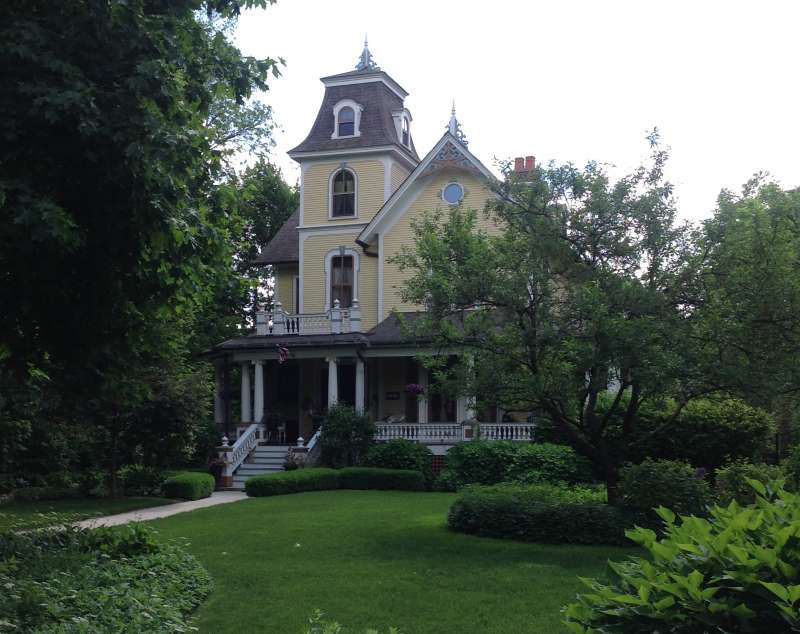 Riverside has since survived such things as attempts to despoil its parks with residential and commercial construction, a plan to drive a four lane east/west highway through the northern heart of the town, economic depressions and recessions and fires and floods. Its dedicated and protective citizens have met almost all challenges to its integrity and beauty.  As a result, it remains, astonishingly enough, what Olmsted originally intended it to be over 150 years ago: a great place to live and relax.

The Frederick Law Olmsted Society of Riverside has been around for 50 years to preserve, protect and promote Olmsted’s Riverside legacy. It runs educational programs, lectures, volunteer landscape workdays, poetry and photography contests, housewalks and walking tours—the best way to see the village and appreciate its many charms. To learn more or arrange for tours call 708-442-7675 or e-mail tours@olmstedsociety.org