Route 66 became the legend it is for good reason. It’s not just a road. It’s an encapsulation of that classic American dream: of freedom, of speed, of opportunity. Of what you might find if you just got out there and lived.

Route 66 became the legend it is for good reason. It’s not just a road. It’s an encapsulation of that classic American dream: of freedom, of speed, of opportunity. Of what you might find if you just got out there and lived.

And it’s got a lot of neat stuff on and around it. It starts here in Illinois, and ever since it came to be in 1926, it’s been accompanied by nearly as many landmarks as it has been legends.

As we celebrate Illinois’ history, we have to celebrate the history of its most famous road. And with that, some of the must-see sights along its path.

Begin Route 66 Sign and the Pontiac Mural, Chicago and Pontiac

Well, you just can’t pass these up. The image most-associated with Route 66 is its iconic signs; that shield adorned with the bold and unmissable “66”. You’ll find lots along the way. But there’s two that stand out amongst the selfie options.

In downtown Chicago, you can stand at the point Route 66 begins, on E Jackson Blvd.

But for a truly memorable photo and experience, head to Pontiac. There you’ll find an enormous Route 66 mural, perfect for parking up your classic American car for the classic American photo opportunity.

Why visit: Because it’s the best way to let everyone know you were on Route 66.

Route 66 is home to many-a museum, but there’s one you should stop by above all others: the Route 66 Hall of Fame & Museum in Pontiac (where you got that photo in front of the mural!).

There you can take in thousands of artifacts and memorabilia from Route 66’s glory days, learn stories from expert guides, and get a real sense of why Route 66 plays such a huge part in America’s history and identity.

Why visit: You’ll experience the rest of Route 66 in a whole new way. 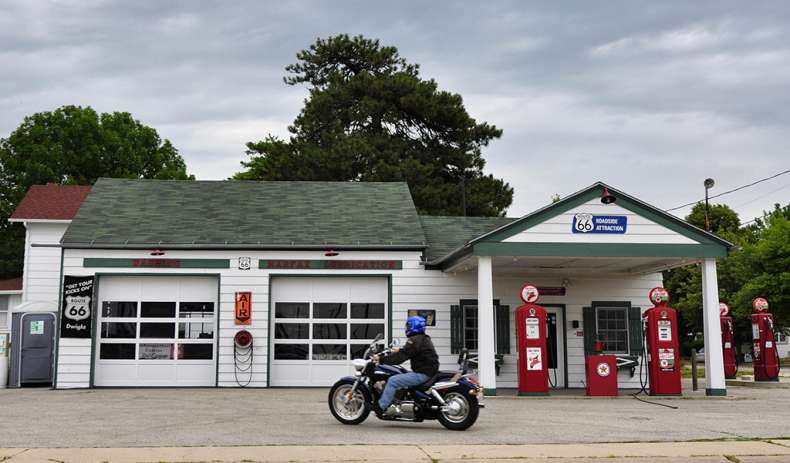 Route 66 was all about cars, and cars loved one thing above all else: gas. Between 1933 and 1999, this old Texaco Gas Station fed untold numbers of cars on their journeys down Route 66, and was the longest-operating gas station on the route. Today it’s been restored to its 1940s-era glory, but rather than feeding cars, it feeds curious minds as a Route 66 visitors’ center.

Why visit: You’ll rediscover what was once a common sight along Illinois’ highways and byways. 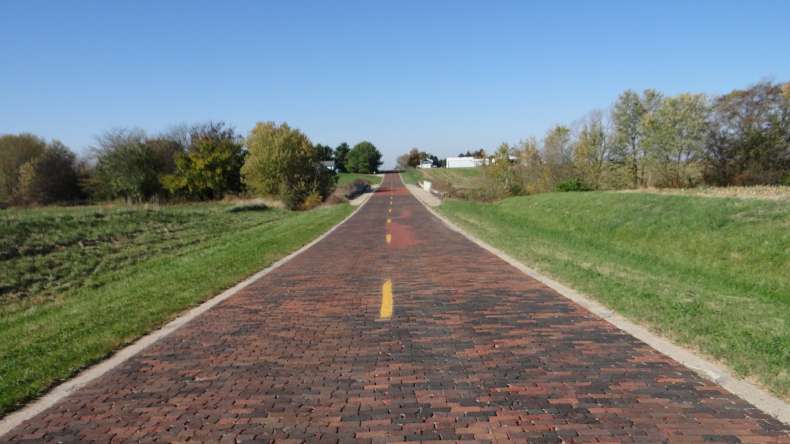 Highways have changed a lot in the past 90 years. Here you’ll find a beautiful, 1.4 mile-long piece of restored hand-laid brick road dating back to 1931, with an underlying bed that stretches back even further.

Why visit: It’s a true glimpse into the past of Route 66, one last chance to see an original brick style of another Illinois era.

The mystique of Route 66 is swept up in the history of American cinema. And American cinema was long associated with a great tradition: the drive-in movie.

These worlds all collide in Litchfield at the Sky View Drive-In. It opened in 1950, and has been in seasonal operation ever since. It was there through the classic drive-in era of the 1950s and 1960s, the nascent blockbusters of the 70s and 80s, and all the classic films that have come since. And all going well, it’ll be with us a lot longer.

Why visit: Because though we’re sure it’ll stay with us, it is of a dying breed. Once a common site on Route 66, this is the last remaining drive-in on 66 in Illinois. It’s a great opportunity to experience an everyday activity of Route 66’s glory days.

This fading mural was hidden for many decades behind an adjoining building, but following that building’s demolition, it reappeared to the world. Now it’s a beautiful example of old outdoor advertising.

Why visit: Well, it’s a shoe ad. So presumably you truly could have gotten your kicks on Route 66 here. (Come on! You can’t pass up that kind of social media photo opportunity!) 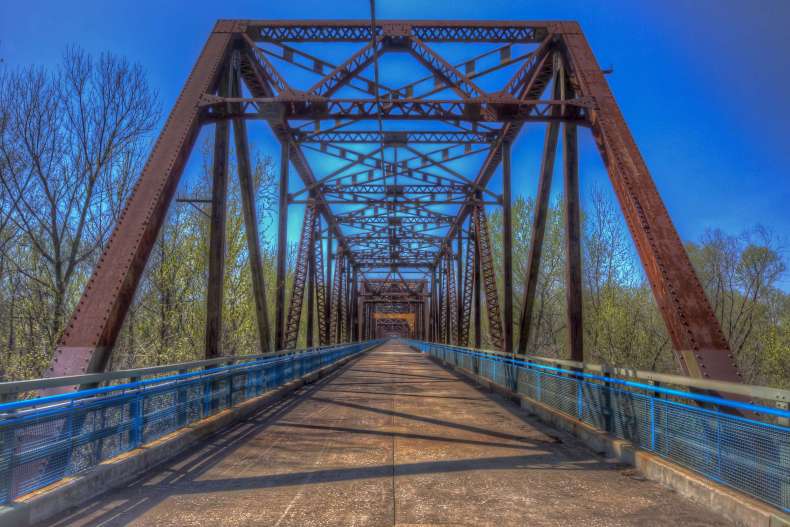 Once this was the point Route 66 left Illinois, ushering cars across the Mississippi into Missouri. But it retired from that work in 1970, and after many years sitting in uncertainty, it’s now content just to carry pedestrians and cycles, and to serve as a pilgrimage point for Route 66 aficionados. It also stood in as New York’s fictional 69th Street Bridge in the 1981 film Escape from New York, even if it is actually nowhere near New York.

Why visit: This is where the Route 66 story ended for Illinois—and where it began for the rest of America. 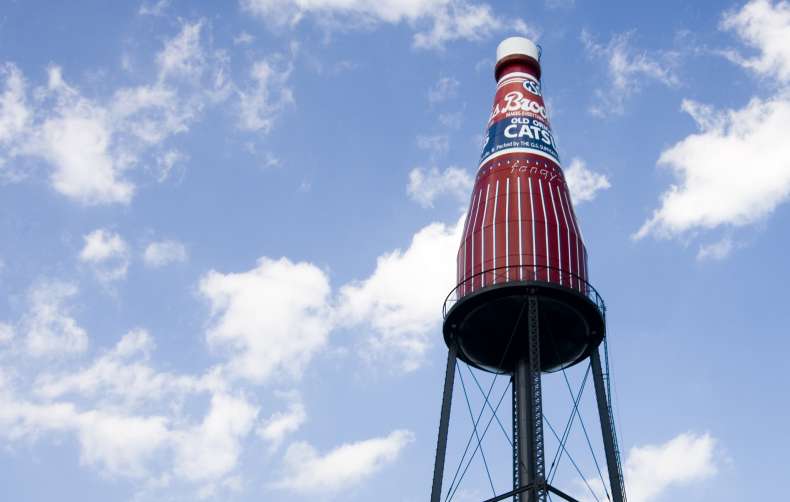 We can safely say you haven’t seen a catsup bottle even nearing the size of this one. The 170 ft. tall bottle has stood proudly nigh-on 70 years, since October 1949. Originally a water tower for the Brooks Tomato Products Company factory (makers of America’s best-selling catsup), the tower now stands as an icon unto itself, singing the praises of a largely-forgotten product, which it will likely long-outlast.

Why visit: It pays tribute to Illinois’ manufacturing prowess, and celebrates that great American tradition of giant roadside novelties. And, c’mon. It’s a giant catsup bottle. Who wouldn’t want to see that? 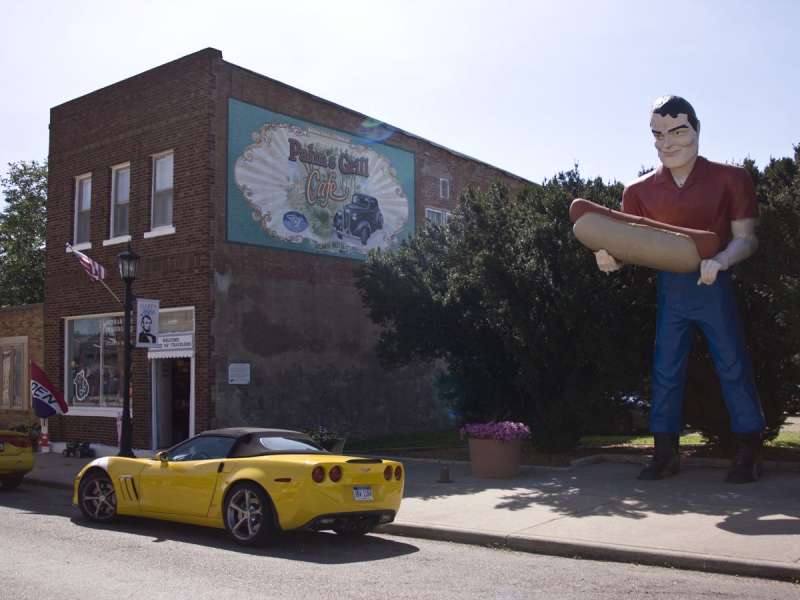 Okay, if we’re going to mention the giant catsup bottle, we should mention the hot dog man (the two often go together… just not in Chicago). For nearly 40 years, this 19-foot tall fiberglass man stood by the Bunyon Hot Dog stand, welcoming hungry passersby with the promise of hearty fare… though perhaps not quite as hearty as the statue’s dimensions would suggest. Although Big Paul was once shot with arrows by a group of teenagers, he enjoyed a mostly happy existence in Cicero, before moving to his current home of Atlanta for his retirement. Paul retains ownership of the same hot dog he has held since 1966, and is reported to be in good spirits.

Why visit: Paul is very proud of that hot dog.