By Amber Holst of Concierge Preferred Eating and drinking outdoors is one of Chicagoans' favorite summer pastimes. Luckily, the city has no shortage of options for those looking to quaff a great cocktail out of doors.

Eating and drinking outdoors is one of Chicagoans' favorite summer pastimes. Luckily, the city has no shortage of options for those looking to quaff a great cocktail out of doors. Here’s a look at seven Chicago rooftop bars and patios that the locals swear by, as suggested by local concierges.

Located in Chicago’s Edgewater neighborhood on the North Side, this old-time local favorite tops Hotel Palomar  Concierge Mark Kraemer’s list and is known for their simple and delicious burgers and massive fenced-in beer garden (with plenty of trees offering cool respite from the heat). The two-tiered space has scores of tables and benches, many of which can be easily moved together to accommodate groups of friends or families. No matter if you’re looking to share a pitcher of their red sangria or sip on gimlet, this favorite is one of Chicago’s best-kept secret patios.

Bask in the twilight of the evening as you drink Champagne under the stars at RM Champagne Salon, the West Loop’s hidden piazza for petit fours and bubbles galore. A favorite of Rebecca Starodub, concierge at the Radisson Blu Aqua Hotel, enjoy cocktails and conversation at one of the city’s coolest patios (while the weather permits!) and most unmatched spaces. RM Champagne Salon brings excitement and a sense of yesteryear to an already remarkable area, yet does so in a way that is mysteriously subtle and comforting. Enjoy their beautiful selection of cheeses, Alsatian flatbreads, or the sinfully delicious Lobster Deviled Egg.

“Where else can you dine on a patio that’s a literal backyard facing neighbors?,” says Langham Chicago Chief Concierge Philippe Gills. Occupying a corner tavern in the Bridgeport neighborhood that predates Prohibition, The Duck Inn is a favorite of both Gills and concierge Monica Reyes of theWit Hotel. Helmed by Michelin-starred chef Kevin Hickey, a Bridgeport native, this local haunt serves up creative duck dishes—as the name would imply—in addition to American eats ranging from cheese curds with hoppy mayo and their delectable duck fat dog (Chicago style, of course) to heartier fare like the braised pork shank with spaetzle, pickled kale, and lingonberries. Coupled with their inventive cocktail program (read the descriptions, they don’t disappoint) and comfortable atmosphere, you’ll soon come to see why this neighborhood gem has grown into a true destination restaurant.

Venture just a bit South from Gene’s on Lincoln Avenue and cozy up at what Reside Living concierge Beth LaBrosse describes as “one of the best rooftops around” at Fountainhead. This local gem has a stellar craft beer and whiskey selection, both of which are perfect for sipping the afternoon—or evening—away.

You know what pairs well with rooftops? Specialty sausages. If you’re looking for a low key night out, look no further than Gene’s Sausage Shop & Delicatessen in Lincoln Square. A favorite of John Dillon, concierge at The Langham Chicago, the rooftop beer garden here feels like your own back deck and is essentially summer on a roof. So head north, soak up some sun, and enjoy a few sausages--we recommend the Leberkase sandwich--and a Stiegl Radler or two.

Just a short cab ride from the West Loop’s popular Randolph Street restaurant corridor is the charming Piccolo Sogno. While the elegant interior is an ideal setting for an intimate dinner, it’s the lush patio out back that is the real draw. Best described as a tranquil garden that immediately transports you from the bustle of the city by Ramon Gomez, chef concierge at The Gwen, this neighborhood gem also happens to serve up some of the best rustic Italian cuisine in town. And what would a good Italian meal be without pasta? Here’s an off-menu secret for you: they offer half portions of all of their pasta and risotto dishes, which Gomez recommends if only for the opportunity to try more of their brilliant dishes.

Delicious frozen cocktails, hush puppies, fried chicken, and ping pong? That’s a winning, and fun, combination says Jennifer Brody, concierge at The Peninsula, which is why she—and many locals—simply can’t get enough of Parson’s Chicken & Fish. This neighborhood favorite boasts a sprawling patio reminiscent of attending a backyard BBQ. Laid back and casual, grab a spot at one of the communal picnic tables and do yourself a favor by ordering one of their negroni slushies. Paired with some buttermilk fried chicken and crunchy cool sides? You’ve got a can’t-beat-it outdoor dining and drinking experience. 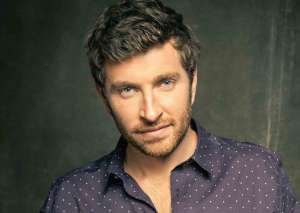 Country music star Brett Eldredge loves Illinois so much, he wrote a love song a... 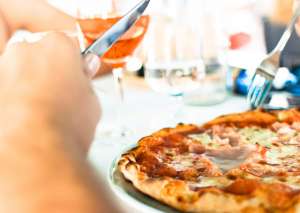 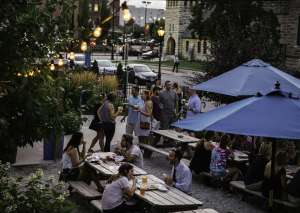 Make the most of patio season with these great al fresco dining in Illinois.