Prefer a spicy autumn ale or a dark holiday stout? Sample 10 handmade beers that get their edge from seasonal ingredients.

Home You are in… Get Inspired » Craft Beer Battles

Bring your growler and fill up on this fall favorite. Big Muddy Beer Co.’s rendition features all the pumpkiny flavor without the spice overdose. The Murphysboro-based brewer mixes in real pumpkins, of course, along with American hops and pale, caramel malts—so it tastes more beer than pie.

No Illinois autumn is complete without a day spent pretzel eating, polka dancing and bier drinking. Champaign’s Blind Pig Brewery brews this fall bier specifically to serve at the C-U Oktoberfest celebration. Crafted with Vienna and Munich malts, it’ll transport you to Bavaria with its pie crust and toasted bread aromas.

The spicy snap of Cademon Brewing’s Evil Pumpkin Patch will give you a chill like you’ve heard a werewolf howl during a full moon. Using pumpkins from local Genoa-area patches, Cademon’s brewers blend in cinnamon, nutmeg, allspice, ginger and clove to complete the potion.

Brewed in Alton’s historic Bakery Building (hence the name Old Bakery Beer Company) overlooking the Mississippi River, this autumn ale is one-of-a-kind. Brewed with 75 pounds of sweet potatoes and a cornucopia of other harvest flavors, you might as well skip Thanksgiving dinner. Plus, the cinnamon and chai finish counts for dessert.

Von Jakob Brewery’s picturesque 20 acres of apple trees is the perfect pairing with this golden Marzen-style German lager. Backdrop is undeniably a part of the experience. Toast to the year’s harvest with this strong beer as you take in the fiery reds, yellows and oranges of Alto Pass in autumn.

Much like the Midwest’s winter nights, Bent River Brewing Co.’s dark stout is filled with comforting flavors such as vanilla, cinnamon, rum, pecan and caramel topped with a snowy white froth. Their Moline-based brewmasters call it a “fun, holiday-themed variation” on their wildly popular Uncommon Stout.

The first glass of this red ale is ceremoniously poured at Rockford Brewing Company’s hoopla the night before Thanksgiving, and it’s gone by New Year’s. Munich malts and roasted barley blend with nutmeg, allspice and clove for the perfect old-timey holiday brew.

Lagunitas Brewing Company is nationally known for its many craft brews, all made in either Chicago (winter experts) or California (not so much). Their brewers “blindly drank little cups of many different fine roasts” until they found the perfect coffee. Brewed with one pound of java per barrel, this stout is a good Saturday starter.

Just one snifter of this ale, and you’ll be able to shed a couple of winter layers. It’s dark, hoppy and just a little chocolatey—perfect for keeping warm on a chilly Peoria night. Obed & Isaac’s brewers call this a “less traditional IPA,” and though black in color, it has a heavenly flavor that will have you ordering a second or third round. Try it at their Springfield location, too.

There’s farm-to-table, and then there’s pine-to-pint. All of Scratch Brewing Co.’s beers are made with locally farmed or foraged ingredients from the woods surrounding Ava, where they brew. When poured, this dark brown beer smells like a freshly chopped Christmas tree, but sips with ruby highlights and a light cherry finish. 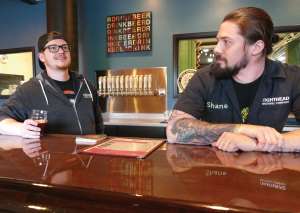 For Bruce Dir, focusing on his passion for craft brewing came easily, given that... 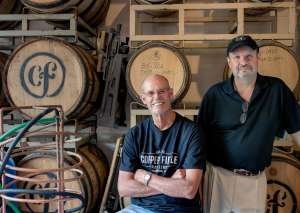 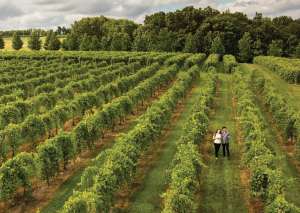 Raise a Glass
in Eat & Drink,  Regional Getaways,  Illinois Made

An Illinois distiller, brewer and winemaker discuss their crafts and welcome you...