Uncover the secrets of Starved Rock State Park, from idyllic hiking to paddling on the Illinois River, for an off-the-beaten-path adventure.

Home You are in… Get Inspired » Off the Grid

The towering bluff that is Starved Rock State Park’s namesake is well worth the visit, but all too often travelers miss out on the other natural wonders of this preserve—secrets revealed during wandering.

The towering bluff that is Starved Rock State Park’s namesake is well worth the visit, but all too often travelers miss out on the other natural wonders of this preserve—secrets revealed during wandering. For my wife, Dee, and I, the real draw of the park has been the slotted canyons with imposing cliffs and amazing views of the Illinois River. But photo after photo of the park’s cascading waterfalls drew us back for further exploration. We were excited to continue exploring the lesser-visited side of the park.

We chose a weekend camping trip that focused on the falls, with ample time for appreciating the river, the canyons and the forest. What would we find next?

With our car packed to the gills with camping equipment and fishing gear, I’m sure we looked like weekend warriors. But when Dee and I got to the campsite, we were well prepared for a relaxing weekend with ample adventures.

A big storm had dropped about an inch of rain on the park the day before we arrived. For a short period of time, the park’s seasonal waterfalls would be gushing. Fortunately, most every canyon and vista in the park is easily accessible through short hikes.

We basked in the morning glory upon the summit of Starved Rock with an iconic view of the Illinois River. Because it was early in the day, the top of the rock was quite peaceful with only a few other hikers around. We passed an idyllic hour just listening to the sounds of the forest and distant waterway.

We leisurely trekked over to nearby French Canyon, which is one of our favorites in the park. The waterfall was running with terrific force and the slot canyon accentuated its delightful sounds. Dee patiently waited as I spent the better part of half an hour trying to capture the perfect photo.

Onward we went up Lover’s Leap and Eagle Cliff Overlook. Something we’ve always appreciated about the park is the way the hike oscillates between climbing up high vantage points and down into deep canyons. We entered the more famous Wildcat Canyon, which is one of the most picturesque scenes in the state. Before us, a nearly 100-foot waterfall dropped straight into a narrow canyon. The dramatic view stopped us in our tracks.

Though this loop hike was only two miles, we spent a good four hours hiking it because we found nearly every foot of it was worth photographing. After grabbing lunch at Starved Rock Lodge, we took a three-mile out-and-back hike through Aurora, Kickapoo, Sac and St. Louis canyons, which were quieter and more secluded than the others in the park. Once we were a few hundred yards from the road, the crowds thinned substantially. Oh, what they were missing.

When there was no longer enough light to hike, we headed into town for dinner at the Lone Buffalo, run by Tangled Roots Brewing Company. Unapologetically unique, the microbrewery fits a perfect niche in the farm-to-fork scene of the Starved Rock area. Their signature bison burgers and potent beer were the perfect way to wrap up a day on our feet.

A Day on the Water

Day two was entirely aquatic. A unique way to appreciate the grandeur of Starved Rock is paddling the river under the sandstone cliffs. We rented a canoe from the state park for a few hours to explore Plum Island.

We enjoyed easy access to the water from the boat launch near the visitor’s center. Paddling near the shoreline of the island, the forest was abuzz with the sounds of birds. From here we turned our sights toward Starved Rock and paddled beneath its monumental shadow. On this trip, we’d been at its base and its peak. With the slow current, we were able to maintain a gentle pace as we passed the statuesque sandstone butte.

Paddling to the other side of the island, the shipping channel and locks came into view. We hugged the shoreline of Plum Island once again as the busy locks kept barges moving. This side of the island seemed to be somewhat of a freeway for shipping. For a time, we simply let the gentle current carry us back toward the boat launch, while we took in the natural wonders around us. Back on the dock, we realized we never used our fishing gear. Okay, we may have overpacked.

To wrap up our trip, we decided on an evening cruise on The Belle of the Rock. A chance to take an old-fashioned paddle boat was a true Americana experience. The narrated cruise illuminated the natural and native history of this special place people have called home for thousands of years. Once again, Dee and I loved uncovering what Starved Rock reveals, and agreed at that moment in time it was nice to let someone else take the wheel. 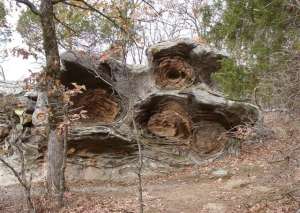 Jewels in the Crown of the Beautiful Shawnee National Forest
in Family Fun,  Outdoors,  Activities

Garden of the Gods and Rim Rock/Pounds Hollow Recreational area are two must see... 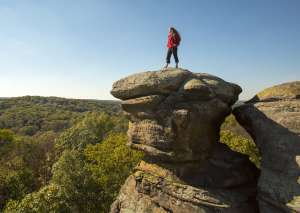 In southern Illinois, fields give way to forested hills, rugged bluffs and sweet... 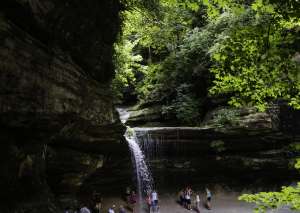 Unlock the Secrets of Starved Rock

In the midst of vast Illinois farmland, weekend travelers discover a topographic...