Chicago Hot Dog: the only hot dog that matters

Home You are in… Illinois 200 » Chicago Hot Dog: the only hot dog that matters

Share 'Chicago Hot Dog: the only hot dog that matters'

Illinois is home to a long and rich culinary tradition.

Illinois is home to a long and rich culinary tradition. The people who came to call this place home brought with them their own cuisines, and, calling on the produce of the state’s vast swathes of farmland, they set about creating new tastes, ways, and innovations that would influence the entire country, and indeed, the entire world.

But we’ll talk about all that another time. Because here we’re interested in only one thing: the Chicago Hot Dog.

The Chicago Hot Dog is one of the world’s finest foods, and you simply cannot convince us otherwise. But why would you want to? Its splendor is obvious to all who sample it. In a world full of flash-in-the-pan fast foods, the Chicago Hot Dog rides high, a legacy whose roots stretch back further here than even the hamburger or the pizza.

If you’ve ever had a Chicago Hot Dog, then you know what we’re talking about. But if you haven’t, dear reader, then, well, we’re not sure you’ve really lived.

Okay, while the form and fashion of many dishes is up for some debate, the fundamentals of the Chicago Hot Dog are sacred and certain. You’re free to debate us on this, of course, but it would be futile.

Hot dogs elsewhere, you’re gonna have your frank, your bun, your mustard; maybe a little ketchup if you’re so inclined, maybe onion if you’re living large. And you might think that’s enough.

Friend, that’s just not how we roll with a Chicago Hot Dog.

Here it is. And it is always in this order:

And always remember: dress the dog, not the bun. Do all of this right, and you will have in your possession (briefly, they never stick round long) the perfect Chicago Hot Dog, with a taste of all its glorious ingredients in every bite.

Where is the ketchup, you ask?

There is no ketchup. That’s not how this works. You’re of course free to do what you like—it’s your Dog—but you won’t be eating a Chicago Hot Dog. There’s even a whole book about that. (But we can summarize it for you: no ketchup.)

The first inklings of the wonder we now know as the Chicago Hot Dog go back to the 1840s. Large numbers of German immigrants arrived in Chicago, and with them, they brought the meat products of their homeland—including the frankfurter. Soon, it became a staple of this land, too.

But that was just the first generation ‘dog, an exotic mix of meats. It was later that century that the frank that sits proudly astride the Chicago Hot Dog today made its presence known. Jewish immigrants brought the all-beef frankfurter, and with that, we were finally on the way to glory.

Still, there are two more milestones to touch on before we can reach Chicago Hot Dog Nirvana.

The bun, that classic poppyseed-adorned bun, was gifted to Chicago and its culinary legacy by Polish-born Sam Rosen. The bun found a lifetime partner in the all-beef hot dog, and the two have been an unstoppable duo ever since. You can buy them to this very day from the original S. Rosen Baking Company!

In the ensuing years, the nascent Chicago Hot Dog moved ever-closer to its current form. Vendors would put their own mark on it, adding the condiments and toppings that came from, and appealed to, the new communities shaping Chicago. Each of these bore a closer and closer resemblance to the Chicago Hot Dog millions enjoy today.

And then, the same event that shaped so much of American history for decades to come gave rise to the final Chicago Hot Dog form.

As America fell on hard times, the humble hot dog rose to the occasion. Cheap, plentiful, and satisfying, the hot dog filled a gap, and it filled stomachs.

But as it was then, it just wasn’t quite enough. It needed more.

So the vendors dragged it through the garden.

That phrase would become the defining characteristic of the Chicago Hot Dog. It’s the signature combination of toppings that distinguish the Chicago Hot Dog from its lesser rivals. And it all came from struggling communities trying to make the ‘Dog just a little more filling, to get them through lean times. They came together, they experimented with what they had, and as in so many other times in America, that need led to something great and enduring. And the shouts of early 1930s hot dog vendors became the birth cry of a Chicago legend.

Where to find the Chicago Hot Dog today 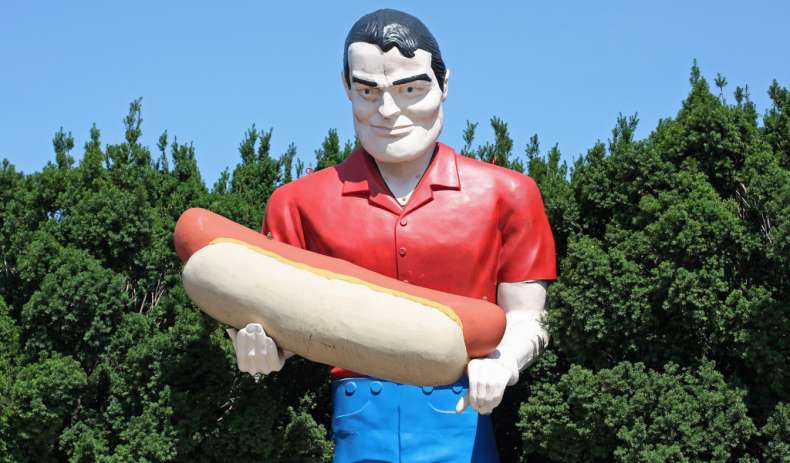 It’s safe to say those hot dog pioneers were really on to something, because today, the Chicago Hot Dog is Cook County’s go-to street snack. And you’ll find it just about everywhere within those borders. You can even attend Hot Dog University, just to make sure you get your Chicago Hot Dog skills absolutely right. (Don’t miss Kevin Pang’s account of his time as a student there.)

We couldn’t begin to fairly narrow down the best options. But to get you started, here are a few that we hear do a good job. 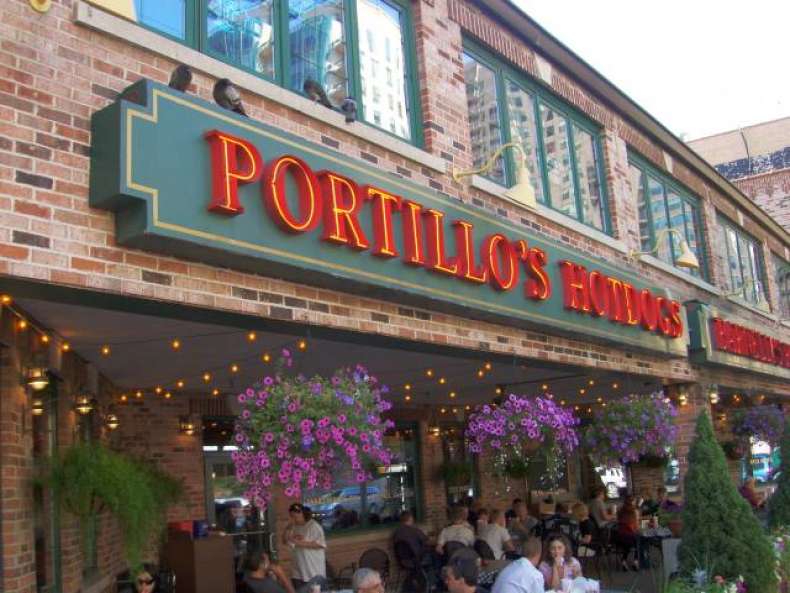 Portillo’s has spread beyond Illinois, but here it’s been serving up Chicago Hot Dogs since the early 1960s. Starting as a humble hot dog stand in suburban Villa Park (”The Dog House”), it’s a true success story more than half a century on. 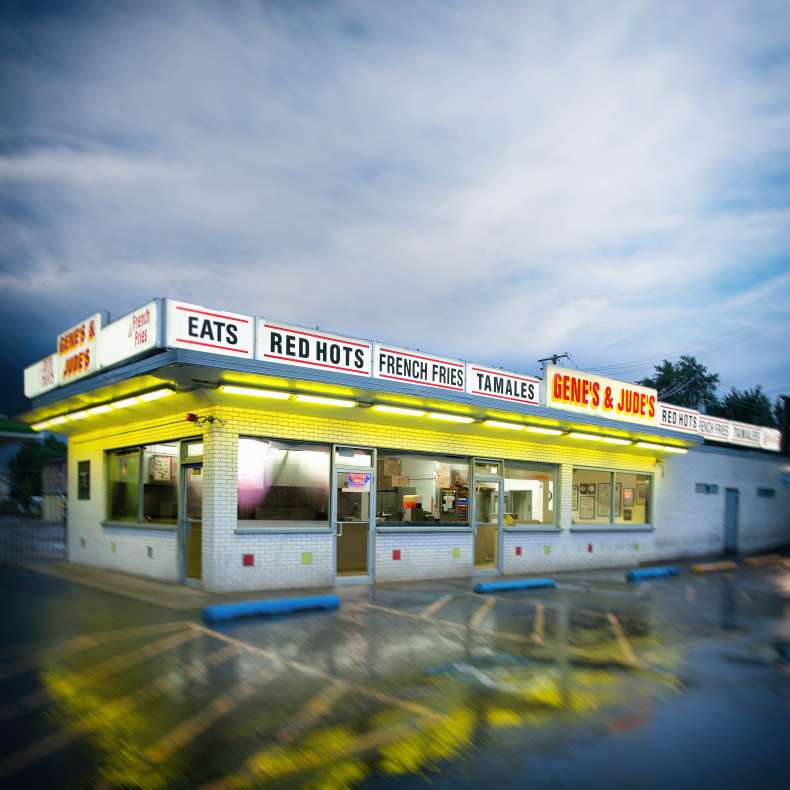 Here the Chicago Hot Dog is done a little differently, but that’s okay: it just goes back to an earlier point in its history. It foregos the poppy seeds, pickles, and tomato, emulating the “depression dog”, which wasn’t quite as jazzed up as the classic Chicago Hot Dog that emerged from that era. But it’s still a Chicago Hot Dog, and still a must-try. Only, you definitely don’t want to ask for ketchup here.

So, first of all: the building is topped by two giant hot dogs in Tarzan and Jane attire. Can you really pass that up? But it’s done more than that to earn its stripes. Superdawg has been turning out one of the finest examples of Chicago Hot Dog for 70 years. It’s topped more than one critic’s list, and we think a trip to Chicago isn’t complete without experiencing its classic carhop-style service.

Have you found the perfect Chicago Hot Dog?

Don’t just keep it to yourself! Share it on our Enjoy Illinois Facebook page, or take a pic and hashtag that puppy (well, Dog) #EnjoyIllinois. Share the love! Give people food envy!