The Cozy Dog Drive In: The World’s First Corn Dog on a Stick

The corn dog is a gastronomic treat. And it started right here in Illinois with the Cozy Dog.

Home You are in… Illinois 200 » The Cozy Dog Drive In: The World’s First Corn Dog on a Stick

Share 'The Cozy Dog Drive In: The World’s First Corn Dog on a Stick'

Some of the best things in life come on sticks. Popsicles. Teepees. The Muppets. And of course, the corn dog.

Some of the best things in life come on sticks. Popsicles. Teepees. The Muppets. And of course, the corn dog.

The corn dog has been synonymous with fairs and festivals around the country for decades, but just when did its meteoric rise begin? And how did the corn dog go from deep-fried abomination to the nation’s most beloved pressed-meat on a stick?

Turns out, it all started right here in Springfield, Illinois. Let’s take a journey and discover the history of this cylindrical treat and the original restaurant that put it on the map, the Cozy Dog Drive In.

History of the Corn Dog

As it happens, the golden weenie made its first official appearance on a stick right here at Springfield’s legendary Cozy Dog Drive In. Owner Josh Waldmire, grandson of Cozy Dog founder Ed Waldmire Jr., sat down with us to discuss the deep-fried details of the story.

Back in the early 1940s, Waldmire Jr. visited Muskogee, Oklahoma, where he encountered an unusual sandwich called the “corn-dog.” Unlike the fried corndogs which would rise to prominence at the Cozy Dog Drive In, this sandwich featured a wiener baked into a cornbread and lacked the modern-day corndog’s signature stick. Ed thought the corn-dog was good, but took too long to prepare in a traditional baking oven. The problem, he recognized, was being able to cover the hotdog in batter and cook it in a short time.

In the fall of 1941, Ed shared his unusual sandwich anecdote with fellow student Don Strand, whose father was in the bakery business, and then thought little more of it. Five years later, while stationed at Amarillo Airfield with the Air Force, Ed received a letter from Don following up on the conversation: in the intervening time, Don had created something of a Frankenstein’s monster.

“To my surprise he had developed a mix that would stick on a wiener while being french-fried,” Ed recalled. “He wondered if he could send some down that I could try in Amarillo. Having plenty of spare time, I said ‘yes.’”

Using cocktail forks as sticks and the USO kitchen as his laboratory, Ed got right to work on his new craft. He called his original creation the “crusty cur,” and it became a popular snack at the local USO and airfield. Ed and Don sold thousands of their crusty curs before Ed was honorably discharged in the spring of 1946.

After he arrived home, Ed decided to continue selling his stick-adorned-dogs in his hometown of Springfield. Naturally, his wife disliked the objectively less-appetizing “crusty curs” and requested a name change. After an arduous process, the duo landed on the name “Cozy Dogs,” and on June 16, 1946, the Cozy Dog made its official debut at the Lake Springfield Beach House.

The Cozy Dog Drive In

Later that year, the Cozy Dog made its first fair appearance at the Illinois State Fair. Its residence then bounced around for a few years, before finding its permanent home in 1949: the Cozy Dog Drive In on Route 66. 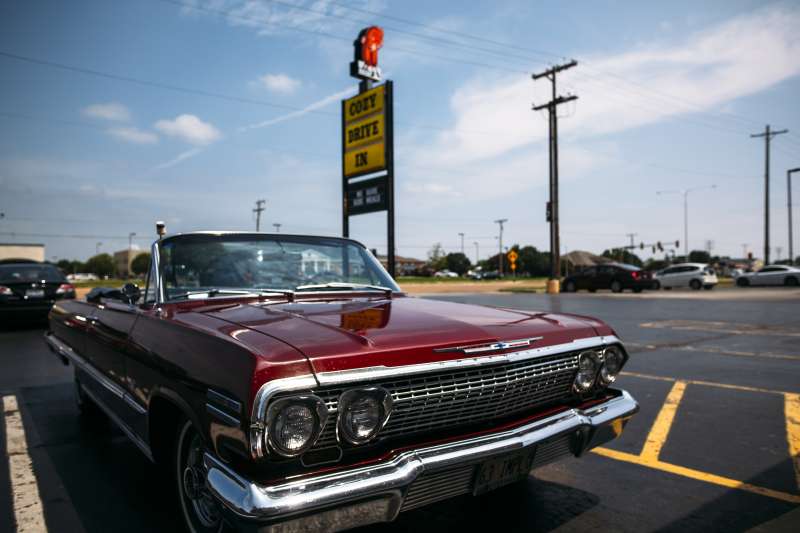 Tasting your first Cozy Dog is an ethereal experience. Every Cozy Dog is composed of one juicy hotdog, skewered and battered in Ed’s original Cozy Dog batter, fried to a crispy golden-brown. Their signature batter offers a cornier flavor than most corn dogs today, with a taste and consistency more akin to actual cornbread. And of course, every Cozy Dog is served up alongside a giant Midwestern-sized portion of french fries—because what goes better with deep-fried starches than a basket of deep-fried starches? The food is so iconic the Cozy Dog has even been featured on the Food Network’s popular Diners, Drive-Ins and Dives.

Route 66 History at the Cozy Dog Drive In

The restaurant’s location on Route 66 has made it a popular destination-dining experience for road-trippers. As much Route 66 visitor center as it is landmark Illinois restaurant, visitors can explore tons of memorabilia and insights from the route’s heyday while learning the Mother Road’s storied history.

It’s here on Route 66 that Josh Waldmire developed an appreciation for his grandfather’s creation.

“I grew up at the Cozy Dog. My parents, Buz and Sue Waldmire, took over from Ed around 1975. I was born in 1981, so I spent quite a bit of time in the restaurant. I had the privilege of growing up in one of the original buildings on Route 66, built in 1960, as well as getting to see our current location flourish.”

Josh did some career-hopping after high school before the Cozy Dog Drive In inevitably pulled him back in. He returned to the shop in 2005 to work for his mother, and Josh officially took over the Waldmire family business in 2013. He’s proud to carry on the family legacy.

“To this day, we still do it just like grandpa did. We use the original recipe that my grandfather created in the 1940s, and we even use the same "cozy racks" to cook the Cozy Dogs that Ed used back in the 60s.”