Home You are in… Illinois 200 » Scuba Diving in Illinois

When you think “Illinois,” you might not immediately think “scuba diving. ” After all, the nearest coastline is at least 500 miles away. And yet, you’ll find scuba diving aplenty in Illinois, thanks to our lakes, flooded quarries and some clever and enterprising locals.

When you think “Illinois,” you might not immediately think “scuba diving.” After all, the nearest coastline is at least 500 miles away.

And yet, you’ll find scuba diving aplenty in Illinois, thanks to our lakes, flooded quarries and some clever and enterprising locals. Not only that, you might just find some of the most interesting dives to be had in this part of the world... 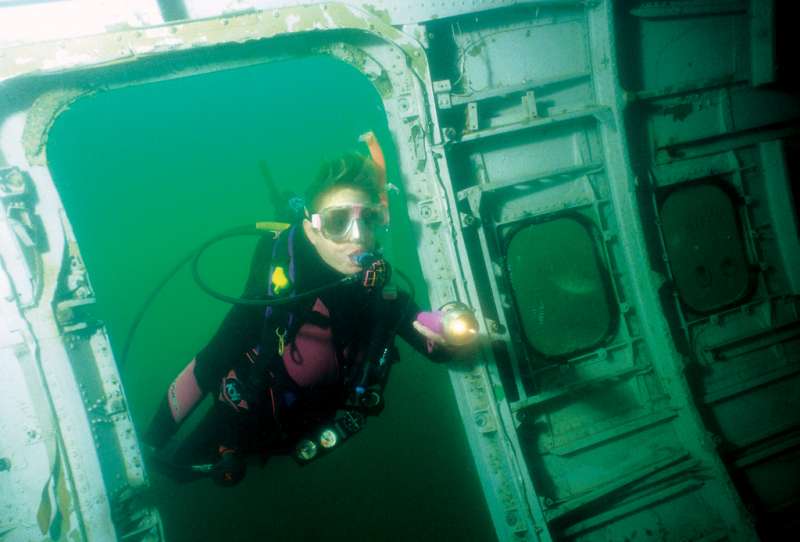 Looking on the waters of Mermet Springs from the surface, you might not see anything out of the ordinary. But beneath the surface, it’s a whole different story.

Mermet Springs is like an amusement park for scuba divers. Diving in its spring-fed waters you can explore a railroad car, submarine, Ford pickup truck, two Cessna aircraft, an ambulance, a firetruck, cabin cruiser, motorcycle, semi-truck and finally, a “petting zoo” of cement animals. It’s probably the only opportunity you’ll ever have to encounter these underwater.

And yet, that’s not even the most impressive attraction. There’s also a Boeing 727 fuselage, hollowed out for easy exploration. The wreck was originally used filming the movie U.S. Marshals 12 miles away near Bay City.

Mermet Springs provides a full range of quality rental equipment. And if you’re new to scuba or just want to upskill, they offer a wide range of diving training options, too.

If you visited Haigh Quarry 40 years ago, you would have been faced with a very different sight. Where now there’s beautiful spring-fed waters, then there was an abandoned limestone quarry.

But once local Jim Haigh bought the land and shut off the water pumps, it started on the road to what it is today: one of the country’s best dive locations. There aren’t boats or fisherpeople; just you and the water.

Well you, the water, and a few hidden attractions. Like Mermet Springs, beneath Haigh Quarry’s waters you’ll find some exciting novelties to explore. There’s a rock crusher (a nod to that quarry heritage), a step van, a cabin cruiser, an amphibious supply vehicle, a 2.5-ton military dump truck, a collection of tricycles and a 1962 fire truck.

There’s also one feature you’re unlikely to find at any other dive site. It’s the artifact park, an area with submerged artifacts intended to help divers learn underwater archaeology. There’s an accompanying program taught by a Chicago-area dive store. And if you want to learn more general dive skills, that’s no trouble: there’s certification, specialty and professional classes available.

The diving isn’t just an afterthought. While the diving area is handy to all the other recreational features of the area, it’s also kept separate, so you’re not competing with swimmers and people fishing. Like Mermet and Haigh, it’s also got a lot to keep you interested underwater. Diving down you’ll find a Beechcraft twin-engine airplane, a full-size school bus, a 45-foot long Great Lakes fishing tug, gargoyles and aliens and lots more – even a 33-foot yellow submarine!

You’ll encounter a healthy range of aquatic life down there, including rainbow trout, perch, walleye, bass, bluegills and maybe even a giant catfish.

Illinois’ most famous body of water harbors some spectacular diving opportunities. Within its vast waters you’ll come across some of the most interesting and complete shipwrecks you’re likely to find. Because it’s cold freshwater, the wrecks don’t degrade as they might in the salty ocean.

These are only a few of the hundreds of wrecks in Lake Michigan. The best way to explore them is to get in touch with a local charter company who can take you out to the precise spots. But it’s not for the inexperienced – diving is fun, but exploring wrecks in open water has many risks! Enjoy, but be careful, and go with a guide.