The Mystery of Cahokia Mounds

Dubbed the Manhattan of early America, Cahokia Mounds is one of the most impressive and historically significant destinations in Illinois.

Cahokia Mounds in Illinois are the site of an ancient Native American city.

Home You are in… Get Inspired » The Mystery of Cahokia Mounds

The site of an ancient Native American city, the mounds are located in Collinsville, Illinois in the southern part of the state across the Mississippi River from St. Louis, Missouri. Cahokia Mounds covers 2,200 acres and contains 70 mounds.

The site of an ancient Native American city, the mounds are located in Collinsville, Illinois in the southern part of the state across the Mississippi River from St. Louis, Missouri. Cahokia Mounds covers 2,200 acres and contains 70 mounds.  Visitors can just imagine the once elaborately planned community with a complex and sophisticated society. The depth and breadth of the mounds and their size and complexity are breathtaking and thought-provoking at the same time.

The History of Cahokia Mounds

Cahokia Mounds dates back to A.D. 700 with first settlers known to be the late Woodland Indians. They lived in villages along Cahokia Creek where they hunted, fished and grew food. Starting at around A.D. 1000, the Mississippian culture, defined as a mound-building Native American civilization, began to come alive with highly structured communities with their own political and social systems. Because of the stable food base that was able to be developed, Cahokia Mounds began to support larger, more permanent populations. At the peak of civilization, between A.D. 1050 – 1200, it spanned six square miles and reached the estimated population of 20,000.

The mounds themselves are surrounded by mystery. What drew these people to the site in the first place? Though inhabitants of Cahokia Mounds left no written records beyond symbols written on pottery, shell, wood, copper and stone, the original 120 mounds are believed to be built for ritual, burial and elite shelter purposes. They were made from earth dug from “borrow pits” and transported in baskets on the backs of settlers to the spot of the mound. Today, the mounds still show the stages of construction including borrow pits. You can just imagine the intensive labor that went into developing these complex structures.

Of the 70 mounds and earthworks on site at Cahokia Mounds, the following are the most celebrated:

It’s important to note that although the mounds were named after the Cahokia tribe of the Illiniwek confederacy who arrived in the 17th century, they were not the original inhabitants. The original name of the city is shrouded in mystery.

The Decline of Cahokia Mounds

Around A.D. 1200, the expansive and impressive population of Cahokia Mounds began to decline, though the mounds remained a ceremonial center until the mid-1300s when the site was ultimately abandoned. Experts do not know whether the abandonment was a result of disease, loss of resources, environmental changes, issues relating to political power, or a combination. You will be left thirsty for more information after learning about the eerie decline of the mound population. Why did they build such a complex society, and then abandon it? Did they leave in a hurry?

Cahokia Mounds is open 8:00 a.m. to dusk every day and though admission is free, a donation is suggested. Cahokia Mounds is conveniently located on Interstate 55 and within easy driving distance to hotels, dining and additional accommodations and destinations.

Before you go, reach out to Cahokia Mounds State Historic Site at 618-346-5160 to inquire about events and happenings that might overlap with your trip. Once on site, be sure to stop by the Interpretive Center to get maps, ask questions or check out an audio or guided tour.

Cahokia Mounds is not a destination to be overlooked – and a trip you will not regret. If its splendor, accessibility to highways and byways of Illinois and significance in early civilization isn’t enough to convince you to visit, Cahokia Mounds was named in 1,000 Places to See Before You Die in early 2017! Don’t be surprised if the mystery of the lost civilization of Cahokia piques your interest in the people who once called it home. 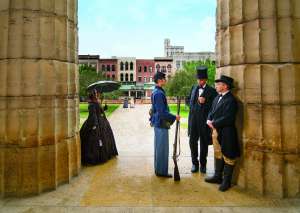 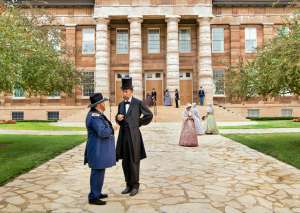