As seen on Guy Fieri's Food Network shows, here are some of the "Diners, Drive Ins and Dives"locations in Illinois.

Home You are in… Get Inspired » Diners, Drive-Ins and Dives Locations in Illinois

Fieri’s new show, Triple D Nation, revisits many of these places, including The Shanty in Wadsworth, where he gushed over their “dynamite” whiskey shrimp and blackened conch filet mignon. Below are some of the Diners, Drive-Ins, and Dives locations Guy has visited on his shows (including Triple D Nation), along with one he hasn’t been to … yet.

Feel-good food is what Diners, Drive-Ins and Dives is all about. Along Route 66 in Willowbrook, Guy stopped at the throwback Dell Rhea’s Chicken Basket for their famous fried chicken and baked macaroni and cheese smothered in what he called “the Colorado River of cheese sauce.” The 24-hour, 365-days-a-year White Palace Grill, a South Loop institution, is a stereotypical old school diner with a Greek chicken that Guy describes as “delicious.” In Springfield, a World War II-era airplane hangar houses Charlie Parker’s Diner. Enormous portions are served, like pizza-sized pancakes and the famous “horseshoe” (or, “a shoe” as locals call it).

What is a horseshoe sandwich? Well, there are many versions of the shoe, but a typical breakfast shoe has eggs and bacon on two pieces of thick bread, topped with hash browns, gravy and homemade cheese sauce.

Bonus: read more about the Horseshoe Sandwich as part of 200 Years: 200 Stories.

A diner serving 16 types of fresh fish—but also great breakfasts, including 25 choices of cereal—charmed Guy during his visit to Glenn’s Diner in Chicago. He gave the thumbs up to several fish dishes and the “tasty” meatloaf sandwich.

Chicago’s Mexican and Latin food game is strong, too, as Guy discovered. He described the pollo, plantains and rice as “outrageous” at 90 Miles Cuban Cafe (two locations in Chicago, one in Lincolnwood), and fawned over the Peruvian-style corn tamales, made with chicken and topped with lime and sweet onions, at Taste of Peru. The décor may be simple at the cash-only Irazu, but the Costa Rican food is muy delicioso. Their famous oatmeal milk shakes complement the plantains, empanadas and rice dishes. A glass of sangria and authentic Mexican dishes made with ingredients from local farms are served in the colorful basement of Chilam Balam. Legit Caribbean food, including the national dish of Belize, Belizian Stew Chicken, made Garifuna Flava a standout.

Chicago is famous for this kind of food, and Diners, Drive-Ins and Dives shows why.  You don’t get more Chicago than Vito and Nick’s, the legendary South Side pizzeria. And forget deep dish. Here it’s about thin-crust pizza topped with sausage or homemade Italian beef. “This isn’t just coming to get a pie, this is an event,” Guy said on the episode.

The restaurant may be named after hot dogs, but the char cheddar burgers at Paradise Pup were deemed by Guy to be the "mac daddy of all burgers.” He also dug the three-layer fries and Italian beef sandwich. One of his top 15 burgers of all time comes from DMK Burger Bar (locations in Lombard, Oak Brook and Chicago). Their salmon filet burger with ginger, Thai curry aioli and Asian slaw made him say, “Daaaaamn! Now that’s a burger.”

Guy is a rocker, which explains his love for Kuma's Corner (locations in Schaumburg, Vernon Hills and Chicago). Loud rock music plays while you chow down on burgers named after rock bands, like Slayer, a 10-ouncer on a bed of fries, topped with chili, caramelized onions, andouille sausage, cherry peppers, Monterey Jack, scallions and “anger.”

Guy has yet to cruise farther down Route 66 to discover Springfield’s Cozy Dog Drive In. The Route 66 memorabilia-covered restaurant serves up paper baskets loaded with state fair-worthy corn dogs or hot dogs and fries. It’s best accompanied by a cold Route 66 root beer.

Every barbecue style in America melds together at Chicago’s Smoque BBQ, where people line up out the door for hunks of their roughly chopped, dry-rubbed, smoked brisket cooked for 14 hours. Live music comes with the wood-roasted barbecue at Honky Tonk BBQ, where Guy feasted on their beef tips and ribs smothered in house-made sauces like Chicago Sweet, Memphis Tangy or Carolina Mustard-Butter-Garlic. He also found comfort in a slab of smoky barbecue ribs at Chuck’s Southern Comforts Cafe (locations in Darien and Burbank), where the barbecue menu veers into Tex-Mex and Cajun territory. 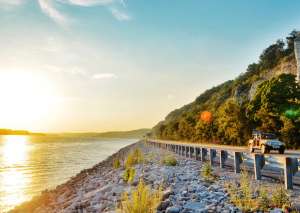 A road trip through small towns and along river roads is the best way to see not... 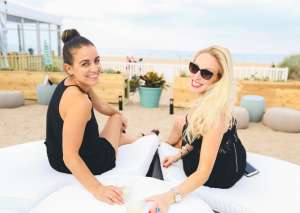 On the Waterfront: Dining on Lake Michigan

On the Waterfront: Dining on Lake Michigan
in Eat & Drink,  Chicago

Where to eat in Chicago to drink in views of Lake Michigan.