Home You are in… Get Inspired » A Haunted Getaway in Galena

Ghost stories and tales of haunted buildings have been whispered here for generations, and year-round ghost-hunting expeditions sell out frequently … even on frigid February nights, such as the one on which I decided to check out Amelia’s Galena Ghost Tours, a local company that leads entertaining tours of the town via a 15-passenger bus. But on the night I board the bus, the cold isn't the only thing to make me shiver.

Our guide, Patrick, is dressed in a vest and tie as if he’s ready to perform a magic show. He has that showman’s persona about him, too, which makes for an entertaining 75-minute tour of local sights that are said to be haunted. The bus departs from downtown, snaking through Galena's narrow, curvy streets as the guide narrates various stories he’s heard from locals. We briefly stop in front of The DeSoto House Hotel, straining our eyes to search for The Lady in Black who roams the basement, and pause at One Eleven Main restaurant to hear about strange occurrences in the former funeral home.

So why all this haunted activity in a small northwest Illinois town? Patrick explains that Galena has a high concentration of spirits for three reasons: 1) It's in a valley, so the energy stays contained. 2) There's been a lot of tragedy in Galena's history due to natural disasters like flooding and fires, as well as the occasional murder or unexplained death. 3) Many of Galena's buildings are preserved, so the spirits still feel at home here. You can buy as much of that as you want, and at this point of the tour, I'm pretty skeptical myself. But that won't last for long.

We hop off the bus at a cemetery from the 1800s and Patrick passes out EMF detectors, those beeping light-up devices you often see ghost hunters wield on television. Everyone also receives a dowsing rod—a more modern version of the forked tool, which people have used for centuries to search for water hidden underground. Patrick explains that a dowsing rod (also known as a divining rod) can detect spirits, too. One of the tour participants tries their hand at dowsing, but the prongs seem only to swing at random as she asks "yes" and "no" questions. The EMF detectors don’t light up or beep, either. Somewhat disappointed—but mostly relieved—our group gets back on the bus.

But that relief vanishes quickly when we arrive at the Ryan Mansion, a beautifully preserved home outside of town that once employed up to 20 servants. We enter the library room, where the EMF detectors almost immediately light up and start rhythmically beeping. Patrick hands me the dowsing rods. I ask the spirit to "show me yes" as the right rod inexplicably swings toward my chest. When I say "show me no," both rods cross over each other. This is getting bizarre. I ask more questions and the answers are always a clear "yes" or "no" response—except when I ask if the spirit enjoys working at the mansion. To that, the rod hesitantly motions "yes."

More than a year later, I still can’t explain what happened in that room. Sure, my squeezing palms may have inadvertently moved the touchy rods in various directions. But to this day, I’m befuddled why, when I expected the spirit to answer "yes" to some of my questions, I got a "no" instead. So … I guess I’m ready to entertain the idea that I may have communicated with a spirit in that room. And even if I didn’t, the enlightening tour of the haunted corners of this beautiful town was more than worth the adventure.

For a shot (or two) of liquid courage before embarking on a ghost tour, check out the town’s sole maker of hard liquor, founded by brothers Matt and Mike Blaum in 2013. The tasting room feels like a big-city lounge with plush oversize leather couches that are easy to sink into when consuming a cocktail. Try a tasting flight of four house liquors: gin, vodka, moonshine and Hellfyre, a spicy favorite made by soaking habanero, jalapeño and black pepper in vodka. Pro tip: Have a glass of water handy. Daily 45-minute tours take you through the distilling area and end with a guided tasting. Before leaving, swing by the merch area for Blaum Brothers-branded shirts and hats, and of course, bottles of their spirits to take home.

Like many of the 19th-century buildings housing shops and restaurants on Galena’s main drag, this one’s allegedly haunted. “All the buildings are haunted,” deadpans petite owner Mary Beth, whose initials inspired the name of this cozy bar and lounge with a fireplace in the back. Mary Beth reports seeing various items fly off the kitchen shelves in this former mercantile. But the only spirits you’re sure to encounter are the ones on the menu. An assortment of candy bar martinis steals the show for sweet tooths (the peanut butter cup is especially decadent). If you’d rather not drink your dessert, try the rum-soaked bread pudding topped with a generous dollop of whipped cream.

No ghosts here, according to innkeeper Matthew Carroll. But there’s something eerie about sleeping in a building that was once the county jail. Two-foot-thick walls, cement floors and brick archway ceilings for security, plus preserved carvings of prisoners' names in Suite 301 hint at this 2015 inn’s former life. Otherwise, the spaces have been masterfully transformed into luxury suites, complete with Bluetooth technology that plays iPod music through speakers in the walls, Kohler steam showers and whirlpool tubs, smart TVs and Turkish bathrobes. Suite 202 (the former living quarters for the sheriff and his family) contains a stone fireplace and 9-foot-tall windows that offer a gorgeous view of downtown and the Galena River. Breakfasts may include yogurt parfaits and freshly baked orange-cranberry muffins—a far cry from prison food, to be sure. 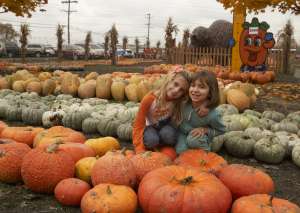 Fall is when many of the state’s best qualities truly shine. Nature, agriculture... 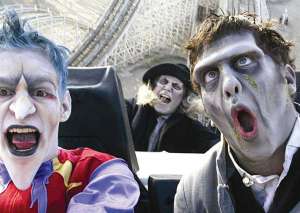 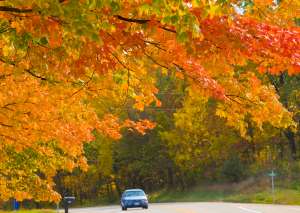 Autumn Kicks off with a Splash of Fall Color

Autumn Kicks off with a Splash of Fall Color
in Family Fun,  Outdoors,  Regional Getaways