Writer Emma Pope spends a day at the museum rich with interactive, invaluable lessons in human rights and our place in the future.

Home You are in… Get Inspired » Keeping History Alive: A Tour Through the Illinois Holocaust Museum and Education Center

I’d been to Holocaust museums before. In sixth grade, I visited the United States Holocaust Memorial Museum in Washington, DC, and at age 25 I was able to visit Yad Vashem in Jerusalem. Both museums had enormous impacts on my awareness of intolerance and injustice.

I’d been to Holocaust museums before.

In sixth grade, I visited the United States Holocaust Memorial Museum in Washington, DC, and at age 25 I was able to visit Yad Vashem in Jerusalem. Both museums had enormous impacts on my awareness of intolerance and injustice.

It’s impossible to compare learning about the Holocaust from a book in history class to walking through a space filled with pictures, personal stories, and interactive moments.  I think of those experiences often; each had a specific but lasting effect on my understanding of humanity and history, not to mention my own history—my mother’s family is Jewish.

But after hearing about the Illinois Holocaust Museum and Education Center right here in Skokie, Illinois, I suspected I still had more to learn. So on a blustery day in December, I headed up to the museum to see for myself. What I found was a set of interactive exhibits that only helped to further open my eyes.

The third largest Holocaust museum in the world, the IHMEC aims to preserve the human legacy of the Holocaust—to transform the future by remembering the past. That’s a big mission, and I was told to set aside at least a half a day to explore the museum. Indeed, there’s no shortage of exhibits, classrooms, and interactive technology for visitors of all ages here.

Per capita, Skokie had the largest community of Holocaust survivors outside of Israel in the 1970s. In 1977, a neo-Nazi group announced its intent to march through Skokie—but the residents rightly wouldn’t welcome such hate. The local outrage ultimately led to the building of the education center that would eventually turn into the Illinois Holocaust Museum and Education Center.  This is important in that the IHMEC is not only a cultural institution—it’s also the product of the community in which it stands, making it unique among the world’s other museums dedicated to the Holocaust.  Every artifact was donated by Chicagoland survivors, and dozens of interviews with locals imbue the exhibits with an indelible sense of place and personality. Local survivor Fritzie Fritzshall, who is featured in the hologram exhibit, is the current president of the museum’s Board of Directors.

The permanent exhibit is the Karkomi Holocaust Exhibition, a journey that takes us through the years before, during, and after the Nazi regime in Germany and occupied Europe. I was lucky enough to be guided through this exhibition by Candy, a top-notch docent.  The displays are designed to be self-guided, but having a docent tour is a wonderful way to make the experience more personal and detailed. Candy wants each person who visits to have an emotional attachment to this piece of history.

A recurring focus of the museum is on the individuals behind the staggering statistics often associated with the Holocaust.  Photos of families, children, and personal artifacts line the walls at every turn, reminding visitors of a simple fact, which Candy so eloquently conveys: "How do you get to six million? One plus one plus one plus one..."

One of the survivors is Cipora Fuchs (Katz), whose picture and childhood blanket complement the story of how she eluded the Nazis by hiding in a potato cellar  for two years. Another family, the Starkofps, are featured throughout the exhibition—first in a wedding photo before Hitler’s rise to power, then in stories and visual aids of the ghetto in which they were held, and finally in a photo of them getting their citizenship in the US after the war.  This is the human connection to the history within these walls.  Each piece of clothing, every passport, all the photos are humming with personal memories of someone who might live just down the street.  As our guide states, “Survivors feel like this is their second home.”  And at certain moments, I actually felt I could have been in my great-grandmother’s living room, looking through old family photos.

This is heavy subject matter, and there are a few areas with disturbing images of violence and death in the Karkomi exhibition, although probably not as many as you would expect.  Candy recommends the permanent exhibition for children 12 and up, but there is plenty to see and experience for younger kids at the museum as well.

Over 60,000 children come through the museum a year. Geared towards children 8–12 years old, the Make a Difference! center is a fantastic way to open young eyes. The hands-on activities, games, and technology give kids the tools to recognize injustice and build the courage to find their own voices. I found myself lingering at a row of lockers, each of which housed a different hero who stood up for human rights. This center has a short video featuring interviews with survivors, who relate the larger issues of global prejudice to topics such as bullying. It’s a beautiful tie-in to the daily work required to stand up for what you believe is right.

The museum hosts a number of phenomenal rotating special exhibitions, as well as events such as speakers, films, and discussions, so it’s worth seeing what’s coming through during the time of your visit.  Many of the exhibitions deal with justice work on a global scale, revealing how the mechanisms of oppression work across history and geography.   When I visited, a photography exhibition highlighting Muslim Albanians who rescued Jews during the Holocaust was finishing up, though an exhibit on Syrian refugees was soon to follow.  These expositions continue to draw the bridge between local and global, challenging us to consider any “far-off injustice” as rather close to home.

The Take a Stand Center, located on the lower level of the museum, is absolutely not to be missed.  It includes three pieces, helpfully arranged for you to move through at your own pace. And you may want to take your time. The first gallery is a small, intimate space in which an interactive 3D hologram of a Holocaust survivor tells his or her story, then miraculously answers live questions from audience members.

The speaker on the day I attended was Fritzie Fritzshall, a survivor of Auschwitz and the current president of the museum.  As you can imagine, Fritzshall’s account of her experience during the war was unbelievably powerful, but watching her (as a hologram) navigate and answer question after question from other museumgoers was unlike anything I’ve ever witnessed.  The specificity of questions she was able to address using interactive technology (moderated by a docent) made the session feel so intimate, so personal, so undeniable.  It is hard to compare this kind of experience to the staid museum visits of my youth.  The technology itself is a wonder to behold, but at a time when so many survivor voices are being lost, it seems critical that scientists have found a way to retain the visual experience of interacting directly with them.  Every few weeks, the recorded speaker is swapped out for another of the 13 survivors currently in the hologram database (seven from Chicago and its suburbs).

After exiting the Holographic Theater, you enter the Upstander Gallery, where you are greeted with the Universal Declaration of Human Rights and biographies of “upstanders” who champion these rights on stages big and small.  By using the touchscreens, you can find local and global workers who are dedicated to positive change and learn about the specific work they are doing.  Based on your specific interest (e.g., economic opportunity or education) you can learn about specific upstanders who champion those causes.  For instance, in my session, George Clooney stood next to native Chicagoan Henry Cervantes, who works promoting nonviolence in local communities, and Wangari Maathi, the first African woman winner of a Nobel Peace Prize.

In this exciting space, the last of the three exhibits, visitors can turn their education into action by learning what kind of activism could be a good fit for their lives.  There are so many things to do in this small space, and every detail is geared toward helping you take tangible action with the lessons you’ve learned.  Based on my own personality and preferences, I’m apparently well suited to spread awareness, which feels rather fitting. I was offered a number of options for how best to execute this task, including templates for writing letters and tips for making protest signs.  Research tells us that writing down a goal makes the author more likely to follow through, so  visitors are encouraged to write the ways they intend to continue their activism post-visit on cards that are hung for display. This exhibit is using the most advanced current technology to not only bring history alive, but also remind us of the work that still needs to be done today.

As I left the building—whose sloping floors and plays on light and darkness only add to the symbolism of its exhibits—I couldn’t help but reflect on the treasure this place holds in the community. There is still plenty knowledge to gain about World War II and the Holocaust, so as to prevent anything so horrible from ever happening again, and this learning can (and should) be taking place all over the world.  But to have such an informative, unique opportunity right here in Skokie?  This space is a wonder: a history class come alive with its lessons propelling us bravely into the future. 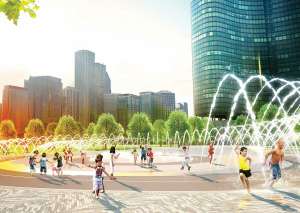 It’s vacation time! Pack the car, round up the kids and set off on a family adve... 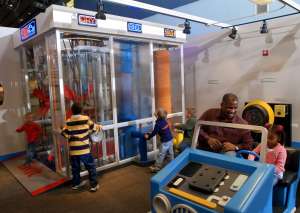