Chicago is a city of neighborhoods. Each one has its own history, style and unique flavor. Here are 10 to fall in love with.

The longtime home of the Chicago Cubs finally has a backyard and a patio. Outside the new west gate of Wrigley Field, The Park at Wrigley beckons with a lush lawn and fountain-filled park where fans gather on game days.

When there’s no game, the park hosts yoga, outdoor movies, farmers markets and concerts. It’s all part of a quest by the Ricketts family, owners of the Cubs, to develop a town square for the Wrigleyville neighborhood near the bright red Wrigley Field Marquee at the corner of Clark and Addison streets. The development includes a glass-front building adjacent to the park that houses the Cubs offices, the Budweiser Brickhouse Tavern, Starbucks Reserve, Lucky Dorr Patio and Tap, Jostens Jewelry Store at the Park, and the Cubs Store. And across Clark Street, the Hotel Zachary (named for Wrigley Field architect Zachary Taylor Davis) is set to open by Opening Day with 175 rooms plus restaurants and shops. As in filmdom’s Field of Dreams, if you build it, they will come. The Park at Wrigley draws folks, even if just to play catch, as Kevin O’Rourke and his son, Patrick, like to do. “Compared to what it was, it’s night and day. It makes people want to come here,” says Kevin, who lives a block away.

Others experience Wrigleyville from rooftops overlooking the ballpark from Waveland Avenue behind left field and Sheffield Avenue in back of right. Many rooftops offer seating, food and beverages. Fans can also stop at bars like the Cubby Bear or Murphy’s Bleachers, located on Waveland Avenue across from a statue of legendary Cubs broadcaster Harry Caray.

Adisak Pochanayon, who can see Wrigley Field from his front porch, says Wrigleyville maintains its energy. “When there are games, it’s kind of crazy, and you can just people-watch.”

If you’re visiting Wrigleyville, especially on a game day, know that parking is limited. Your best bet is to take the CTA Red Line train to the Addison Street station just outside Wrigley Field. Or take CTA bus No. 152 or No. 22—both stop at the corner of Clark and Addison.

European influence runs deep in this neighborhood founded by German immigrants in the 1840s and still filled with Bavarian-flavored restaurants, music and charm.

Once predominantly a neighborhood of working-class people, Lincoln Square has become an oasis for artists. Writers read from their works and lead discussions of them at The Book Cellar, while musicians host concerts at the Old Town School of Folk Music, where many folk performers of the 1960s launched their careers.

Though the area has diversified, its European roots are still evident in the shops and restaurants. Of note: the natural personal care products at historic Merz Apothecary and the European market and delicatessen of Gene’s Sausage Shop.

Pair craft brew with local indie rockers at this festival hosted by the famed Old Town School of Folk Music.

From its perch on Clark Street, the museum is surrounded by eclectic places to enjoy a beverage. Across the street, the old Swedish speakeasy of Simon’s Tavern serves up glögg slushies (made from mulled wine) in the summer beneath the sounds of an impressively stocked jukebox.

South of Foster Avenue, the Belgian-inspired Hopleaf Bar serves a friendly neighborhood crowd a bevy of beer options. Here, even the mussels are steamed in a Belgian white ale, served alongside a pile of frites.

Andersonville also boasts a large LGBTQ population. The neighborhood is home to the Back Lot Bash, a women’s festival held in conjunction with Chicago Pride.

An equality rally is the capstone to this celebration of Swedish culture in what is the traditional kickoff to Chicago’s festival season.

In this overlooked treasure on the Northwest Side, locals are torn between bragging about Logan Square and guarding their secret.

“You can come here and have the Michelin Star experience, or you can drink PBR and listen to punk rock,” says bartender Nathan Case-McDonald as he mixes cocktails at Longman & Eagle. The whiskey-focused bar and restaurant with a six-room inn is named for the 70-foot-tall monument that stands at the center of Logan Square.

With its boutique shops, outdoor patios and impromptu street performances, Logan Square is at the top of the list for people-watching. And with the addition of a 2.7-mile stretch of abandoned elevated train tracks that the city converted into the pedestrian-friendly path called The 606, the area has become a top spot for runners.

The weekend fest features two stages with a lineup of bands, performance and installation art, and plenty of activities for children at this neighborhood fundraiser.

If foodies could carve out their own slice of heaven, it would look a lot like the area around Randolph Street and Fulton Market. In the West Loop, James Beard Award-winners brush elbows with Top Chef champ Stephanie Izard in a friendly culinary competition that packs the neighborhood with palate-pleasing options.

Whether it’s the roasted pig face at Girl and the Goat, the tear-jerking Kanabo Spice at High Five Ramen or the duck liver tart on the tasting menu at Elske, the dishes here defy categories and comparisons.

“Everything here has its own identity and its own style,” says Executive Chef Chris Curren of Fulton Market Kitchen. That includes unique dishes like melt-in-your-mouth beef cheeks served with fava beans and wild mushrooms.

Ten percent of the proceeds of purchased artwork are donated to charity.

Touting a motto of “Live and laugh,” this neighborhood echoes with the mirth produced by world-class comedy. The stretch of Wells Street between North Avenue and Division Street is the heart of Old Town, with a slew of restaurants framing The Second City, the famed theater where comedians like Tina Fey, Bill Murray and Stephen Colbert started out.

With nightly shows at The Second City, stand-up routines at Zanies and classes offered on the art of improvisation, this is a place where established comedians come to live and jokesters come to train.

“This is a cohesive community that works and plays together,” says John Garvens, an Old Town resident and recent graduate of The Second City’s Improv Program.

A self-guided walking tour through more than 50 gardens in the Old Town Triangle Historic District lends a perfumed air to this art fair.

This neighborhood might boast the chillest vibe in Chicago, as it serves craft cocktails to connoisseurs and food to famous chefs. “That doesn’t mean you have to have a refined palate to eat in this neighborhood,” says LeQoinne Rice, co-owner and operator of Rhyme or Reason, a restaurant designed with the intention of bringing funky back to the neighborhood.

Vintage shops nudge up against cozy live-music venues, and speakeasies like the Violet Hour are perfect for a nightcap. Here you can buy and sell vinyl at Reckless Records or browse used titles at the vast Myopic Books, a three-story bookstore. Around the corner, Big Star, the late-night honky-tonk, spins vinyl, and the low-key, no-reservations crowd wolfs down tacos on the patio.

With eclectic music as a backdrop, models walk the runway in a fashion show.

Murals covering nearly every available space make a stroll through Pilsen feel like a tour of an urban Latin art museum. Art colors the CTA station, overpasses and fronts of buildings.

These public works of art don’t all appear spontaneously. The neighborhood recruits world-renowned street artists to add their works to the people’s gallery. Street artist Gaia created one of the most famous pieces, Quetzalcoatl and the Stork, which adorns 16th Street. More examples of culturally rich art fill the National Museum of Mexican Art.

For displays of authentic Mexican culinary arts, head over to 18th Street. At Carnitas Uruapan, families feast on platefuls of slow-simmered pork with warm tortillas, fresh cilantro and pickled jalapeños.

Chefs compete in a cook-off, and Lucha Libre wrestlers show off in a high-flying performance.

Known as the Polish Village, Avondale salutes its roots with an array of Eastern European restaurants, delis and grocers. At Kurowski’s Sausage Shop on Milwaukee Avenue, an astonishing array of sausages hangs behind the vast meat counter, where the signs are in both Polish and English.

As more young professionals move to Avondale, the fabric of the neighborhood is changing and the residents are cheerfully making room for restaurants like Parachute, a Korean-American hot spot that has been a Michelin Star restaurant since 2015. However, the Polish influence remains strong, and one of the highlights of any visit to this area is the opulent St. Hyacinth Basilica, a stunning example of the Polish Cathedral style of churches.

Festival-goers dine on potato pancakes, stuffed cabbage and pierogi at the largest Polish festival in the country.

Dubbed the Black Metropolis in the early 20th century, this South Side neighborhood filled with Victorian-Era mansions, music and art is where African-Americans settled during the Great Migration, establishing a legacy of blues music and civil rights activism.

Today, professionals and entrepreneurs are leading a revitalization effort that shows in the number of shops and restaurants opened by neighborhood residents. One is Bronzeville Jerk Shack, where chicken and pork are marinated and slow-grilled.

Across the street, a converted shipping container proudly displays a Bronzeville Bike Box sign and serves as a repair shop and hub for coordinating tours geared toward the neighborhood’s rich history.

Music-lovers soak up sun and tunes while enjoying some of the best views of Chicago from Oakwood Beach. 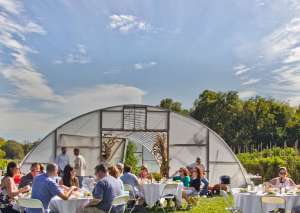 Healthy living through sustainable, environmentally sound farming that relies on... 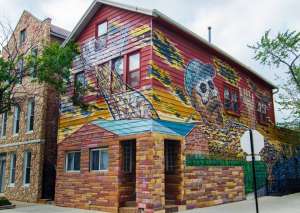