Dive In to Illinois

Home You are in… Get Inspired » Dive In to Illinois

The summer sunshine is one of my favorite things. It seems to almost have healing powers. I always joke that it’s because I’m half Italian and my lineage thrived under the Mediterranean sun.

The summer sunshine is one of my favorite things. It seems to almost have healing powers. I always joke that it’s because I’m half Italian and my lineage thrived under the Mediterranean sun. But then again, it might just be the carefree attitude that sweeps over me when I’m in a tropical climate or on the beach.

Luckily for me and my fiancé, Dan, Illinois has some of the country’s best indoor water parks, perfect for enjoying all year long. One of my favorites is Grizzly Jack’s Grand Bear Resort, which marries the thrills of a water park with the tranquility of nature.

Grizzly Jack’s Grand Bear Resort is a bit of a deviation from the norm when it comes to water parks, and that’s one of the things I love the most about it. It’s located in Starved Rock Country, a wonderful nature-filled getaway—home to Starved Rock State Park—about an hour-and-a-half southwest of Chicago. The resort is rustic rather than tropical, housed in a log cabin-style building among the trees. There’s even a grizzly-shaped fountain outside that spouts water into a little pond.

Starved Rock itself is a marvelous place to get away for some time among the trees. I grew up in Ohio, half surrounded by woods and half by cornfields, so I loved getting a chance to be out in nature again. The hiking around Starved Rock was great, and Grizzly Jack’s presented us with the perfect place to return after our time in the wilderness.

Dan and I brought my 3-year-old niece Madeline and 6-year-old nephew Emmett here one stormy Saturday, and we spent hours at the 24,000-square-foot Grand Bear Falls Water Park within the resort. We went down the extra-wide, yellow Family Slide more times than I could count, holding hands and yelling as we rode down together. Madeline and Emmett didn’t want to leave the Ranger Station (think playground plus water squirting everywhere). I escaped with Madeline to the shallow Tot Pool once the bigger kids invaded Ranger Station. She made a couple little friends, who joined her in sliding down the mini slides that resembled trees and logs. We also took Madeline and Emmett on a couple rounds of tubing through the Lazy River, which took us through the whole park.

Emmett lucked out and was just tall enough to reach the 48-inch height requirement for the Body Slide and Tube Slide. He went down both, but liked the thrill of riding the tube down the Tube Slide a little bit better. The slides are fashioned to look like giant rocks, and the kids slide down them past a waterfall and into a warm pool below. Madeline and I waited near the bottom and waved at Emmett before the slide deposited him into the pool and he dipped below the surface. He told Madeline all about it, how his stomach dropped when he first went down and he flipped a couple of times before he got to the bottom. We told her she’ll probably be tall enough to try it herself next time we come.

Once the kids were worn out and their fingers were pruney, we walked across the street from the lodge to grab a bite at Jack’s Place Restaurant & Sports Bar in the Enchanted Forest Indoor Adventure Park. I was very happy that everyone saved room for dessert, as the Honey Pot Sweet Shop—which is part of Jack’s Place—had been tantalizing me all day. We capped the night off with a little walk around the grounds and some fresh air, breathing in the scent of the forest after a rain. As we came back in and cut back across the water park, we stopped for a minute and took it all in, inhaling the chlorine smell that had become synonymous with fun. The kids were tired and ready for bed, and Dan and I were relieved and happy that we had the park. If we had taken them out on a hike and gotten caught in that thunderstorm, things could have gone south quickly. But the day spent laughing among the water slides was perfect, and the night ended well. 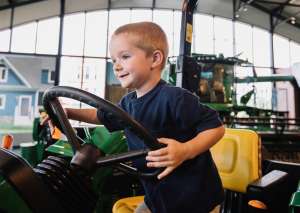 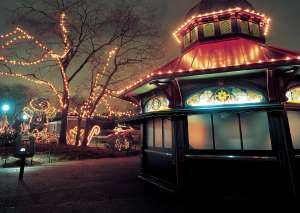 Christmas in the City

Christmas in the City
in Chicago,  Activities

A former Midwest resident rediscovers her love of Chicago at Christmastime, swap... 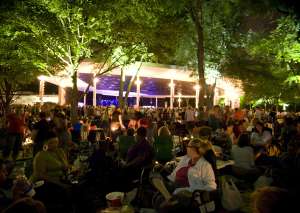 From jazz to rock to soul, you can hear it all at North America's oldest outdoor...