Rockford's Laurent House is a beautiful example of Frank Lloyd Wright architecture, and the only house he designed specifically for a client with a physical disability.

Home You are in… Illinois 200 » Frank Lloyd Wright’s “Little Gem”: The Laurent House in Rockford

Illinois is full of all kinds of adventures. And in a state full of so many Frank Lloyd Wright homes and history, now and then you’ll find an adventure of the cerebral sort: a chance to delve into the mind of America’s greatest architect.

Illinois is full of all kinds of adventures. And in a state full of so many Frank Lloyd Wright homes and history, now and then you’ll find an adventure of the cerebral sort: a chance to delve into the mind of America’s greatest architect. That’s what you’ll find in Rockford, at the Laurent House, one of Illinois’ entries on the National Register of Historic Places.

The story begins with a statistician named Kenneth Laurent, who served four years in the Navy during World War II, only to be stricken with a spinal tumor after he had returned to his job and wife in Rockford. Surgery removed the tumor but left Laurent a paraplegic for the rest of his life. He spent six long years in Hines VA Hospital in Chicago, coming home on weekends to be with his wife, Phyllis.

But the visits were frustrating and difficult. He had to be carried anywhere there were steps or narrow hallways, including the bathrooms. He and Phyllis searched for a solution, and eventually, she found it in an article in House Beautiful magazine. It was about a Frank Lloyd Wright-designed home, intriguingly headlined “The Love Affair of a Man and His House.”

Kenneth also was intrigued by the story. So he wrote Wright a letter, asking if the architect could design a home for a man who was confined to a wheelchair—and if he could do it for $20,000. (Laurent, who eventually returned to his job at Rockford’s National Lock Co., lived on a budget.) Wright responded that he could design such a home, but would make no promises on keeping cost under $20,000.

Fast-forward to 1952. After many letters and some personal meetings between Wright and Laurent, the first and only house Wright designed for a client with physical disabilities became the Laurents’ home. It was not only a first for Wright, it may well have been the most user-friendly home for a paraplegic anywhere at that time.

It was $7,000 over budget, but Laurent never complained. By that time, he was a friend and admirer of Wright, and thrilled with his new home. Laurent had to use a freight elevator to get to his office at work, but when he came home, he could exit his car and enter the house by one of three entrances, all in his wheelchair, without help. When the couple entertained, guests sat on low chairs and other furniture designed by Wright with Laurent’s eyeline in mind, so people chatting with him were at or below his eye level. Many of the light fixtures are also Wright designs. 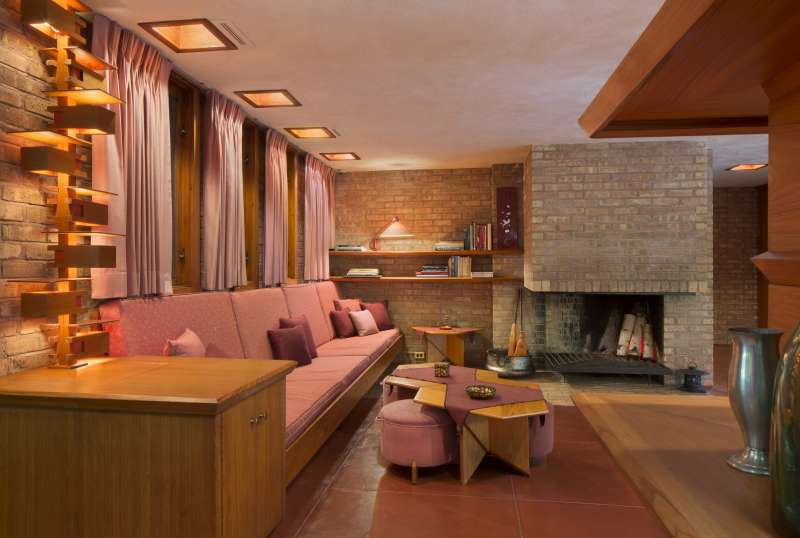 Laurent said many times that Wright’s design was so enriching to him, he was sure it extended his life. He lived to age 92, dying in 2012.

The home would eventually pass the standards of the American Disability Act with flying colors, particularly impressive given that the Act only became law 40 years after the house was built. Well, pass with one exception—the kitchen. It was the late 1940s and ‘50s, so the kitchen followed the general practice of the time, being designed not for Ken, but rather Phyllis.

The exterior of the home forms two intersecting arcs, with a similarly-shaped patio in the back overlooking an expansive yard. Red tidewater cypress wood was used for the interior walls and outside trim—a pricey material today, but not so much back then. Chicago common brick is present inside and out. Wright’s color scheme, preserved as much as possible today, was orange, green and Cherokee red. 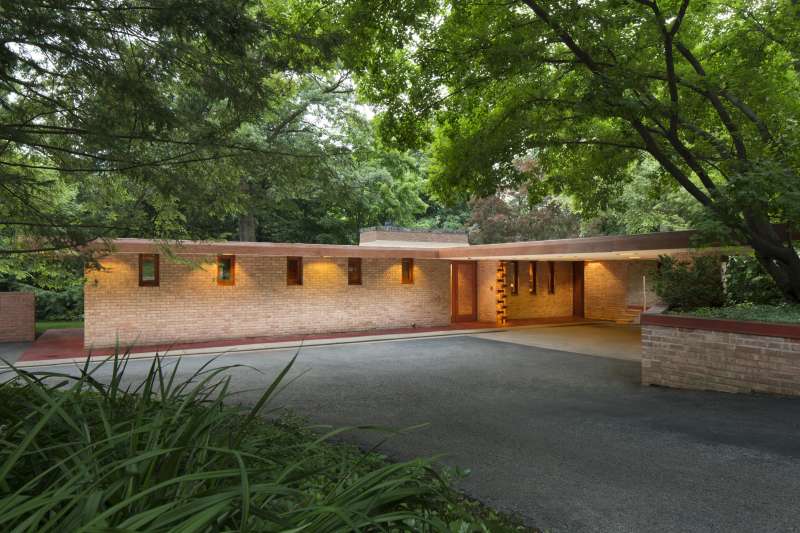 During the 60 years the Laurents lived in the home, they took meticulous care of it. Before energy-efficient windows were installed, Phyllis wiped the windows any time condensation formed to make sure the wooden framework wouldn’t be damaged. The Laurents used shelving Wright designed to display photos and artifacts because they would not allow anyone to put a nail in a wall. When they adopted two children, they built a Wright-designed addition which complemented the original home. Even as teenagers, the kids did not use tape to hang photos or posters on their walls.

A new lease on life

2012 was a bittersweet year for the Laurent House. It saw both Kenneth and Phyllis pass away, but it also saw the home’s legacy secured for future generations. The U.S. Department of the Interior honored it with a place on the National Register of Historic Places. And Rockford citizens raised $578,500 to buy the home, turning it into a public museum. Today, you can take a public or private tour of the home.

The museum is an excellent stop for visitors touring some of Wright’s work in the Chicago area. Wright himself often urged Chicago-area clients to visit the home, calling it his “little gem.” Today, it not only impresses visitors with Wright’s architectural genius and love of nature, it also shows his humanity. He was able to look at the world through the eyes of a man who couldn’t walk and seemed to instinctively know what he felt.

“The mission of an architect,” Wright once said, “is to help people understand how to make life more beautiful, the world a better one for living in, and to give reason, rhyme and meaning to life.”  In that, his biggest success may well be this home he built for Kenneth Laurent. 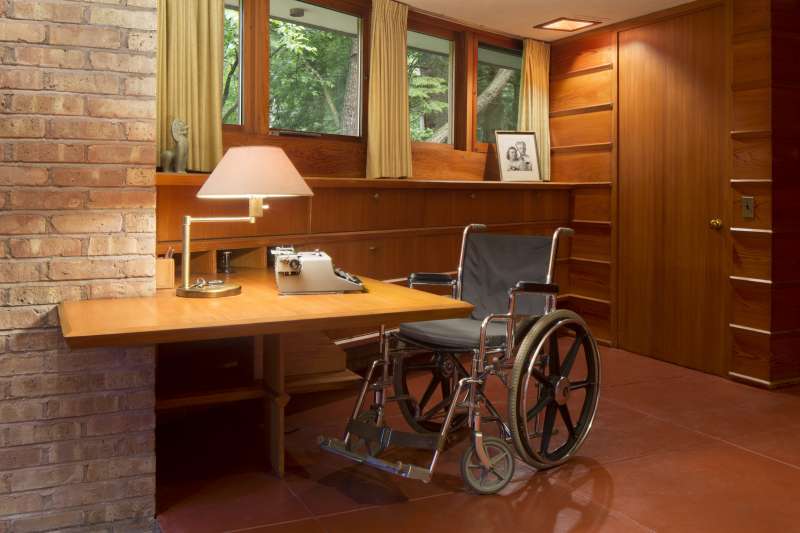