Home You are in… » The Frank Lloyd Wright Trail 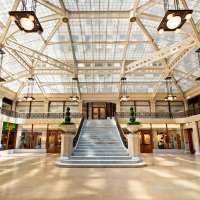 Early Works and Triumphs in Chicago

A Young Architect Builds His Reputation In The Windy City

Spend a day in Chicago exploring some of Frank Lloyd Wright’s most famous designs, from his early collaborations to a solo masterpiece. 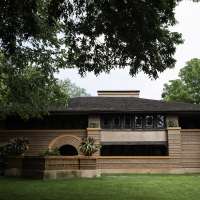 The Largest Collection of Wright-Designed Homes in the World

Settle in a village just outside Chicago to see the largest concentration of Wright-designed homes in the U.S.—including his own. 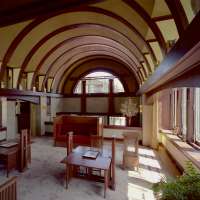 A Trip Down the Interstate to See Prairie-Style Homes

Spread across 200 miles, three of Wright’s most impressive homes evoke his signature style. 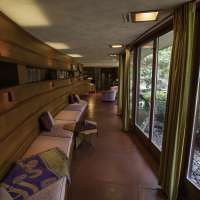 Usonian Gems in the Northern Towns

Take a break from the Prairie-style homes by visiting two properties that show how Wright’s philosophy changed toward the end of his career.

Early Works and Triumphs in Chicago

A Young Architect Builds His Reputation In The Windy City

Spend a day in Chicago exploring some of Frank Lloyd Wright’s most famous designs, from his early collaborations to a solo masterpiece.

The Chicago River Architecture Tour is a 60-minute journey through the heart of the city. ...

Soaring among skyscrapers in the heart of one of the world's most powerful financial distr...

For a printable PDF version of the Frank Lloyd Wright works in this itinerary, click here.

Like most in his trade, Frank Lloyd Wright began his career as a draftsman, working in the studio of a more established architect. In Wright’s case, it was Louis Sullivan—a titan of Chicago architecture in his own right—who took him on as a protégé. Sullivan grew to trust Wright enough to let him contribute to the design of residential commissions, including the James Charnley House in 1892—a collaboration that some consider the first truly modern American home.

How to Visit: Today, the Charnley-Persky House Museum is also home to the Society of Architectural Historians, which leads guided tours on select days.

Built by Chicago’s preeminent architects, Daniel Burnham and John Root, in 1888, this early iron skyscraper is notable enough for its history in Chicago architecture. But the real reason to visit The Rookery is to see the careful orchestrations of sunlight streaming through the glass lobby, which Wright remodeled in 1905—instantly updating Burnham and Root’s drab ironwork for the 20th Century.

How to Visit: The Frank Lloyd Wright Trust leads guided tours of the building on select days.

Designed in 1910, the Frederick C. Robie House cemented Wright’s reputation as a singular architectural talent. A UNESCO World Heritage Site, the Robie house is often considered the crown jewel of the Prairie style—an aesthetic that Wright both pioneered and perfected—the home reflects the Midwest’s flat plains with its horizontal lines, low-pitched roofs, and clever use of natural materials such as brick and wood.

How to Visit: The Frank Lloyd Wright Trust leads guided tours of the interior throughout the year.

Every Frank Lloyd Wright house is special, but this one has something a little extra—it’s the only Frank Lloyd Wright-designed property in Chicago available as a vacation and event rental. It’s a way to experience Wright’s attention-to-detail that few others get to enjoy.

But if you want a speedier visit, then no problem: the house is also open for tours. Built in 1915 for a man who’d admired his brother’s own Wright house, it’s a wonderful example of design from Wright’s late Prairie style period.

How to Visit: Tours are run between May and September on Tuesdays and Wednesdays, between 11 a.m. and 2 p.m.

The Largest Collection of Wright-Designed Homes in the World

Settle in a village just outside Chicago to see the largest concentration of Wright-designed homes in the U.S.—including his own.

With 154 beautifully appointed guest rooms nestled in this historic building, the Carleton...

Unity Temple is another UNESCO World Heritage Site. Late in his career, Wright declared it his "contribution to modern architecture." Indeed, it was a deeply personal project. When Oak Park’s Unitarian Church burned to the ground in 1905, Wright—a lifelong member—volunteered to design its replacement. Faced with a tight budget, Wright relied on clever design choices and plenty of concrete to build the cubist masterpiece, defying almost every convention of religious architecture along the way.

How to Visit: Fresh off a multi-million-dollar restoration, Unity Temple is open to tours on select days. Reserve a ticket ahead of time on the Frank Lloyd Wright Trust website.

Of all the Oak Park homes designed by Wright, perhaps the most important is the one he made for himself. The Frank Lloyd Wright Home and Studio served as Wright’s private residence for the first 20 years of his career (1889–1909), during which he also tinkered with concepts in the sanctity of his studio before unveiling them to his clients (and the world). As such, the home itself offers insights into the subtle experiments and personal habits that informed the evolution of his work.

How to Visit: The Frank Lloyd Wright Trust leads guided tours of the home as well as the surrounding neighborhood, which contains 25 Wright-designed buildings within walking distance.

Most of Wright’s designs around Oak Park are private residences that aren’t normally open to the public. However, each year in May, the Frank Lloyd Wright Trust offers the Wright Plus Housewalk, a guided tour of 10 homes and buildings, including rare glimpses inside several private homes. The next Housewalk is May 18, 2019.

A Trip Down the Interstate to See Prairie-Style Homes

Spread across 200 miles, three of Wright’s most impressive homes evoke his signature style.

A 20th century Kankakee streetcar was moved to Gardner in 1932 to serve as a diner.

Restored and reopened drive-in located along historic Route 66 in Springfield.

Since 1934, Del's has been tempting taste buds in Decatur with the smell of the freshly po...

Built 1900–1901, the B. Harley Bradley House was likely the very first home Wright designed in the Prairie style, making it an essential stop on your survey of his career. The house sits on the banks of the Kankakee River, where you can embark on a half-hour cruise in an electric boat to see other homes along the shore—including another Wright-designed house right next door to the Bradley House.

How to Visit: Docents lead guided tours of the home from Thursday–Sunday.

Commissioned in 1902 for a wealthy Springfield socialite, the Dana-Thomas House reveals the extent of Wright’s creativity when money and space were no object. Aside from a staggering floorplan—its 35 rooms span 16 varying levels and 12,000 square feet of living quarters—the home contains the world’s largest collection of site-specific art and furniture designed by Wright himself, including abstract light fixtures, oak tables, and terra cotta sculptures.

How to Visit: The Illinois Department of Natural Resources leads guided tours of the house most days—including specialty tours that focus on unique aspects of the house. See their Facebook page for information and a phone number to call ahead.

Wright believed banks should express their own character rather than resemble temples of worship. So he designed this bank building with a simple, dignified aesthetic. Remodelling through the years has restored much of that original dignity, and the building still operates as a bank more than 110 years after it was built—the only of Wright’s bank designs to do so.

How to Visit: Tours are not offered, but you can view the interior of the bank (First National Bank of Dwight) during business hours.

Usonian Gems in the Northern Towns

Take a break from the Prairie-style homes by visiting two properties that show how Wright’s philosophy changed toward the end of his career.

J.R. Kortman Center for Design is an upscale shop and art gallery in downtown Rockford.

Less Prairie-style and more Little House on the Prairie, Muirhead Farmhouse is the only known farmhouse that Wright designed and built during his lifetime. Conceived in 1950, the house falls under the Usonians, a term coined by Wright to describe his pastoral vision of a more modest, middle-class style of American architecture. The Muirhead family still owns the residence, which sits on an 800-acre swath of farmland that includes four miles of public trails.

How to Visit: The home is open for tours year-round on select dates; visit the website to make a reservation at least three days in advance.

One of the hallmarks of Wright’s Usonian homes was a focus on practicality, and nothing embodies this more than the Laurent House—the only home Wright ever built specifically for a person with a disability. Confined to a wheelchair following World War II, Kenneth Laurent wrote to Wright requesting a custom home that could accommodate his needs. In 1949, Wright unveiled his plan: a single-story fusion of form and function that incorporates an open floor plan, unrestricted access throughout the home, and materials sourced locally from Rockford.

How to Visit: Private tours of the house are available year-round by appointment only.

The Pettit Memorial Chapel is a small structure on the grounds of Belvidere Cemetery in Belvidere, Illinois. Emma Glasner Pettit, the sister of William A. Glasner, for whom Wright designed a home in Glencoe in 1905, commissioned the chapel in honor of her deceased husband, William H. Pettit. Wright used straight lines and very simple detail which was an extreme departure from the Victorian style that was popular at the turn of the century. It is the only cemetery memorial Wright ever designed.

How to Visit: The cemetery offers self-guided tour programs. It operates 8am – 4pm, Monday – Friday.

“The Villa,” as it was called, is a Prairie-style residence with an accompanying Japanese garden and Dutch windmill, both signs of the owners’ eclectic tastes. They hired Wright in 1907 to remodel the existing farmhouse, and today it is a museum which houses some of the owners’ private collections.