Illinois is a great destination for amateur and professional cyclists alike. There are plenty of amazing spots around the state for everyone with gorgeous views and challenging trails to explore.

Cyclists bike along the lakefront in Chicago.

Home You are in… Get Inspired » Biking in Illinois

Bike Paths You Can’t Miss Route 66 Trail Motorists have long traveled the legendary US Route 66. Now its the cyclists' turn! Beginning in Chicago, Bicycle Route 66 runs all the way to Santa Monica, California for a total of 2500 miles.

Motorists have long traveled the legendary US Route 66.  Now its the cyclists' turn! Beginning in Chicago, Bicycle Route 66 runs all the way to Santa Monica, California for a total of 2500 miles. The bicycle route diverges from the Historic 66 vehicle route and is more relaxing and immersed in Illinois’ rolling hills and prairies. Travel west on bike paths, country roads and state, federal and interstate highways. Enjoy the back roads of the trail and along the way experience iconic Route 66 sights like Chain Rock Bridge and Memory Lane.

Bike through history on the Tunnel Hill State Trail.  It winds through seven towns including some ghost towns, train tunnels, reclaimed strip mines and rocky streams. Tunnel Hill was born from abandoned train operations between Harrisburg and Karnak in Southern Illinois near Carbondale. The Illinois Department of Natural Resources transformed the railroad ballast into a trail for hikers, joggers and cyclists. While the trail is long and difficult and includes 47.8 miles of crushed gravel surface, inclines, and dark tunnels, it is one of the most exciting in Illinois.

Intersecting the Tunnel Hill State Trail, U.S. Bicycle Route 76 passes through six Illinois counties with beautiful views in the southern part of the state. This TransAmerica bike route runs from Missouri to Virginia and was established in 1982 as an original U.S. Bicycle Route.  Explore small town Cave-In-Rock along the trail, where large caves hosted a band of river pirates for decades. In addition, check out the Trail of Tears where 14,000 Cherokees took on their march to an Oklahoma reservation. Don’t forget to enjoy the views of whole fields of flowers in the summertime.

Chicago offers a gorgeous Lakefront Trail on Lake Michigan for biking that is an active and eco-friendly way to see the city’s incredible views. Take in the blue waters and green parks as you peddle along the 18-mile path. If you’re looking to make scenic stops, you can visit the Lincoln Park Zoo, Shedd Aquarium, Oak Street Beach, Grant Park, Museum of Science and Industry, the famous Navy Pier and other attractions. You can even jump into the lake to cool off after biking!

The best way to travel 75 miles from the Illinois River to the Mississippi River is by bike! The Illinois American Discovery Trail is a newly built trail that is part of a larger trail that stretches across 15 states. Quaint towns, camping spaces and historical sites line the Trail in Illinois. The path covers the whole state with a northern route that is mostly flat and runs along a canal, and a southern route that goes through hilly country, untouched by glaciers. This area called the Illinois Ozarks and Shawnee Hills has geologically remained the same for centuries.

Experience another break taking a ride on the Great River Trail, a premier river trail that ventures along 60 miles of the Mississippi River. The route is a combination of paved trail, small-town sidewalks, bike lanes and road shoulders. Starting near Savanna, the trail winds through small river towns with plenty of history through the Quad Cities Area. There are many opportunities for browsing antiques, enjoying catfish dinners and viewing the boats and barges. On your trip, see sights like the Dutch windmill in Fulton and blue heron birds in Rapids City.

Another exciting destination is the Grand Illinois Trail, a 535-mile trail in Northern Illinois that runs from Lake Michigan to the Mississippi River. Bike through the state’s longest continuous trail that features historical canals, Chicago views, unglaciated hills, the Rock and Fox Rivers and one of America’s first rail-trails. 200 miles of the trail is paved and country roads, but the rest of the way is natural limestone paths. Become one of the few to complete all 535 miles of the trail, and you will join the Trail Blazer program.

The 61-mile long Illinois and Michigan Canal State Trail is home to hiking and biking trails that follow the historic route of the I&M Canal from Channahon to LaSalle. In addition to biking, visitors can enjoy the state parks, historical sites and abundance of wildlife and landscapes along the trail. There are also plenty of opportunities to fish, picnic, camp and canoe through the canal. If you are a history buff, you’ll love being on the path that French explorers Joliet and Marquette explored when they looked for a water route to the Gulf of Mexico in the 1600s.

A Biking Experience for All

Illinois has a bike path for everyone, from large statewide trails to leisurely rides along the Chicago lakefront and paved paths to dense country roads. Cyclists will be in awe of the sights offered by these trails including beautiful state parks, canals, Lake Michigan and rolling hills. Biking in Illinois is an activity not to be missed. 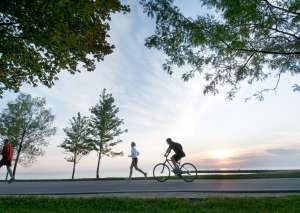 The great Illinois outdoors offer plenty of places to get out and get active. 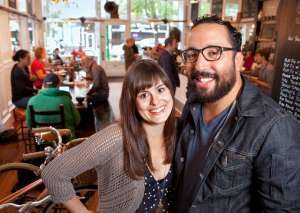 On a Bicycle Built by Hand
in Illinois Made,  Chicago

Mike Salvatore’s custom bike shop and craft coffeehouse combine for a stop that’... 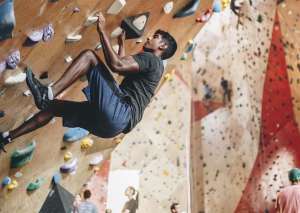