Kitsch, awe inspiring, quirky, colorful, beautiful and unforgettable. The many roadside attractions of Illinois are worth a road trip in their own right.

Home You are in… Get Inspired » Roadside Attractions of Illinois

When it comes to planning an unforgettable road trip adventure, Illinois' scenic byways are the place to start. Itineraries for the outdoor enthusiast, culture hound or history buff are all possible.

When it comes to planning an unforgettable road trip adventure, Illinois' scenic byways are the place to start. Itineraries for the outdoor enthusiast, culture hound or history buff are all possible. With so many sites and stories, the Illinois Scenic Byways provide plenty of detours and distractions sure to make a lasting impression.

A Super Time Awaits along the Ohio River Scenic Byway

The Ohio River Scenic Byway meanders along another famous American River and the Southeastern most border of Illinois. Be sure to make a stop at Cave-in-Rock State Park. The park is famous for its eponymous landmark, a cavern steeped in the history of a time when river pirates threatened those transporting goods along the waterway. A lodge perched atop the overhanging bluffs offers spectacular views of the river, and cabins and camping areas make it a great spot for an overnight detour.

Farther along the byway, in the city of Metropolis, Superman fans will want to stop for a photo with the 15-foot-tall statue of the superhero located in Superman Square — an ode to the city's claim as the Hometown of Superman. Across the street, the Super Museum showcases rare Superman memorabilia and various superhero souvenirs.

Route 66 – Where the Journey is More than Half the Fun

Route 66 was built in 1926 and connects the heartland of the Midwest with the beaches of the Pacific. Businesses erected quirky attractions along the route to attract drivers to local towns, ranging from quirky landmarks to restaurants and even a rabbit ranch.

Relive history at the many historical landmarks along Route 66. The Standard Oil Gas Station in Odell was built in 1932 and represents the classic architectural style of its era. You’ll feel like you’ve stepped into an Edward Hopper painting. If you’re a classic car buff, you’ll want to check out the Oakland Automobile Museum in Pontiac, showcasing Pontiac car models from the turn of the 20th Century.

In Collinsville, you’ll discover the Brooks Catsup Bottle. This giant bottle once served as a water tower for the catsup maker and a prime example of roadside American kitsch.

Stop in the state’s capital to admire the two Springfield big boys, the Abe Rail Splitter Statue depicting a clean-shaven, young Lincoln wielding an axe, and the patriotic Lauterbach Tire Man waving his flag. Also in Springfield, Deck’s Pharmacy Museum is sure to charm history buffs and vintage enthusiasts alike. A drugstore built in the late 19th century, you can enjoy a sweet, ice cream treat while examining pharmacy artifacts dating back to 1884.

Don’t miss Route 66’s iconic Muffler men. The Gemini Giant stands outside the Launching Pad restaurant in Wilmington, south of Joliet. And just across the street from the Palm’s Grill Café in Atlanta, is the towering Paul Bunyon Hot Dog Statue.

The Road that Built the Nation

The Historic National Road Scenic Byway, which extends 164 miles from Marshall to East St. Louis, was the first road completely built using federal funds, setting a precedent by which the country’s highway system was eventually mapped out. For this reason it is often dubbed “The Road that Built the Nation.”

Built in 1806, the original path of the road brought it to Vandalia, the state capital of Illinois from 1819 until 1839. Enjoy guided tours of the statehouse and walk the same halls once occupied by Abraham Lincoln, during his time serving in the Illinois House of Representatives.

Running east-to-west across Illinois from Lynwood to Fulton, the Lincoln Highway was among the first, successful transcontinental highways in the country. To commemorate its legacy, the Lincoln Highway Coalition created 35 beautiful, interpretive murals along the road. Each mural is 10 feet by 20 feet and designed to convey – both visually and through text – the fascinating true stories of Lincoln Highway history. The murals serve to educate, inspire, and offer a great backdrop for photos!

In Joliet, we step back in time to the 1920s at the Rialto Theatre. This Jazz Age gem known as the Jewel of Joliet, is considered to be one of the most beautiful theaters in the nation and an architectural masterpiece. It premiered as a vaudeville theatre and continues to host a variety of performances today.

Just before the Lincoln Highway terminus in Fulton, road trippers will want to snap a photo in front of the impressive De Immigrant Dutch Windmill. The windmill was prefabricated in the Netherlands and erected in the U.S. by Dutch craftsmen. It sits on the flood control dike in the heart of Fulton.

An Adventure Along the Mighty Mississippi

The Great River Road in Illinois parallels the Mississippi River, beginning in Galena, one of Illinois’ most charming, historic towns. Before setting off on a journey south, it is worth taking the time to shop along Main Street and admire the well-preserved 19th century buildings that line the road.

The history of famed frontiersmen Lewis & Clark can be experienced all along the Great River Road. The Lewis & Clark State Historic Site in Hartford is the first landmark along the National Lewis and Clark Heritage Trail. Exhibitions include a 55-foot, full scale replica of the keel boat used by the pair as they journeyed westward, among other artifacts.

Close to where the highway crosses state line lies one of Illinois’ most awe-inspiring landmarks and the state’s only UNESCO World Heritage Site – the Cahokia Mounds. In A.D. 1250, the city of Cahokia was one of the greatest in the world and larger than London. Today, the Mounds are a preserved, 2,200-acre historic site that pays homage to Cahokia’s sophisticated prehistoric culture. Annual events throughout the year celebrate the Native American culture.

This scenic drive along the Mississippi is worth a week-long getaway all its own. Set your itinerary with 6 Days Along Illinois' Great River Road, our guide to a leisurely road trip from Galena to Alton. 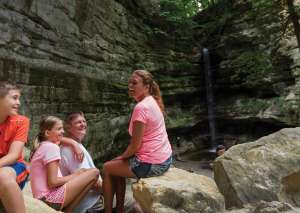 No filter needed. Get the scoop on where to go for the best snaps along seven sc... 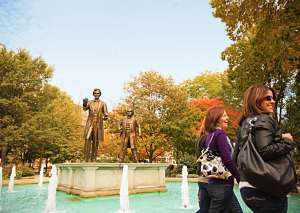 Explore the regions of Illinois with getaways perfect for exploring the fall col... 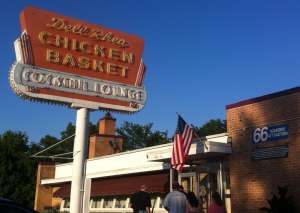